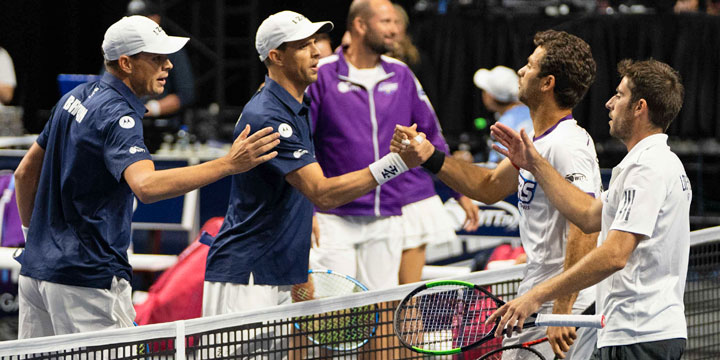 LAS VEGAS – The defending champion Springfield Lasers remained undefeated and ruined the Vegas Rollers’ first home match in franchise history, with an exhilarating 19-18 victory Saturday night at the Orleans Arena. Springfield’s men’s doubles team of Enrique Lopez-Perez and Jean-Julien Rojer defeated Vegas’ Mike and Bob Bryan 7-4 in a tiebreak to secure the victory in the final set of the night.

Spearheaded by a dominating victory in the second set by the women’s doubles team of Abigail Spears and Anna Blinkova, the Lasers held off the late-charging Rollers in front of an announced gathering of 2,318 and improved to 5-0 on the season. Vegas dropped to 2-4.

“With the last match, we knew we had to keep our serve because on paper they are better than us,” Lopez-Perez said. “I think we played we really aggressive and we did a good job.”

After the teams held serve in the final set, the Bryan brothers won the last two games to tie the match at 18-all and force the tiebreak.

Rojer and Lopez-Perez scored the first three points in the tiebreak and opened a 4-1 lead before the Bryans rallied for three straight points to tie the score. But Rojer’s mishit snuck through the twins to steal momentum. Then Mike Bryan couldn’t handle a return to give the Lasers match point, and Rojer finished things off with a solid return that Bob Bryan failed to counter.

Yet while the men’s doubles set was the most exciting of the night, the Lasers were bolstered by Spears and Blinkova, who held serve thrice and broke Vegas’ women tandem of Asia Muhammad and Harriet Dart two times to win the women’s doubles set, 5-0.

“I didn’t expect that actually, but we were just trying to stay focused and kind of do our thing,” Spears said. “We didn’t like how we played our last doubles match, and so I think both Anna and I wanted to focus on a couple of things, and we were able to do that.”

Spears followed that set with a mixed doubles win, as she and Rojer defeated Muhammad and Mike Bryan, 5-3, to give Springfield a commanding 14-8 lead.

Monica Puig made things interesting in her WTT debut by bringing the Rollers back into the match with a dominating effort in the fourth set against Blinkova. Puig, the 2016 Olympic gold medalist in Rio de Janeiro, broke all three of Blinkova’s serves and won the set, 5-1. The victory brought the Rollers within two, at 15-13, and set the tone for the final set.

“Of course, we’re really disappointed to lose, but as far as a spectacle, you’re not gonna do much better than that,” Vegas coach Tim Blenkiron said of the match and electric atmosphere inside the arena. “It was just fantastic entertainment tonight.”

Sam Querrey opened the match with a 5-4 (5-2) tie-break win over Lopez-Perez, as each held serve through the first four games. After both held serve over the first six points, Querrey broke Lopez-Perez to secure the win.

“Welcome to WTT, Vegas style!” was how World Team Tennis was introduced to Las Vegas before Saturday’s match by “SSSSnake” of the Rollers Boys and Girls dance team. Surrounded by a team of dancers clad in sporty white Rollers outfits, and a human-sized tennis ball donning Elvis-garb, SSSSnake belted out a self-written rap that incorporated names of the Rollers and hyped the rowdy crowd in true Vegas fashion. Also, part of the opening act was “The Skating Aratas, a roller-skating duo from Italy and Russia,” who perform nightly at Planet Hollywood’s “V – The Ultimate Variety Show.”

Fittingly watching from smack dab at the center of the VIP section was Gil Reyes, someone who has been at the center of Las Vegas’ tennis scene for many years. The former strength and conditioning trainer for retired tennis player Andre Agassi (1989-2006) received the USTA’s George MacCall Lifetime Achievement Award mid-match and said World Team Tennis and Las Vegas were made for one another. “It’s huge and it’s special and it’s right on time,” Reyes said. “Perfect of course with the success of the Golden Knights, with the Raiders coming, there is no doubt in my mind that Las Vegas is a tennis city. Obviously, we are a large city, but we’re a small town. We love our athletes, we love our residents, we love each other here, and I think certainly it has a place here.”

The Rollers are back at the Orleans Arena on Sunday to host the Philadelphia Freedoms at 3 p.m. ET/Noon PT on CBS. The meeting is a rematch from Wednesday’s match in Philadelphia, where the Freedoms held off the Rollers, 21-16. The match will feature 7-time ATP Tour singles champion Feliciano Lopez, whom Philly acquired Friday from the Orlando Storm. Lopez is expected to make his team debut.