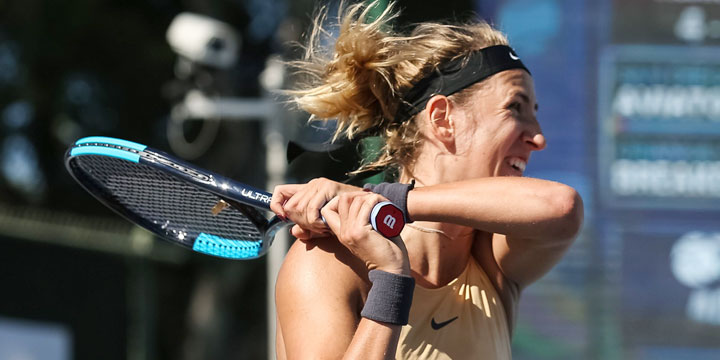 NEWPORT BEACH, CALIF.  – The Orange County Breakers never looked back after dropping a tight first set, winning the final four sets of the evening to dispatch their SoCal rival 24-17 in front of a sold-out crowd. The win was the second straight for the Breakers, while the San Diego Aviators suffered their second consecutive loss in as many nights.

“It feels so great to be back home in Newport. We had an unbelievable crowd tonight, sold-out. Great energy and they got to see a fabulous match. The standard was so high, it was just a pleasure to have Vika (Azarenka) come join us,” Breakers coach Rick Leach said. “And what a great team player, she wanted to play three sets. You could feel the intensity out there, and she really wanted to win. She helped all of us tonight.”

#WTT2019: @BreakersTennis 🌊 @Bambo290 delivers two brilliant gets against the @SDAviators ✈️ for one of the most spectacular points of the night during men's singles with partner @JamesWardtennis. #SDvsOC

“It’s very fun out here. Get to play a little bit of competitive matches, you get the competitive spirit. I feel it’s a great event,” said former world number one Victoria Azarenka. “When you are training for competition, this is just fun to play and mix it up playing with a team. It’s something we don’t really get to experience that often.”

Anna-Lena Groenefeld and Jonny O’Mara earned the lone win of the night for the visiting team, just edging Azarenka and Luke Bambridge 5-4 in the tiebreaker. The two-time Australian Open champion stayed on court for a bout against Danielle Lao, and won all three deciding points to dispatch the former USC All-American 5-1.

O’Mara and Bambridge are doubles partners on tour, and won two ATP titles as well as two challenger titles together in 2018. However, the two Brits had not been on opposite sides of the net since 2016.

“It was different. I quite enjoyed being on the opposite side of the net. I got the mixed doubles win which was a big one haha,” O’Mara said. “It’s so much fun though out here. You’re playing in such a good environment every evening and obviously it was great here today.”

In the upset of the evening, James Ward took out Aviators star Taylor Fritz 5-1 in a tiebreaker, as the Brit won 14 of his 15 first serve points to take down the 30th ranked player in the world.

Vika and 2017 WTT Female MVP Andreja Klepac joined forces and contested the third tiebreaker of the night, winning five of six points to hold off Groenefeld and Lao, giving the Breakers a nice cushion heading into the final set of the night.

With three of the four players representing Great Britain in men’s doubles, Bambridge and Ward won the two crucial deciding points in the set to close out the evening with a 5-3 win over Fritz and O’Mara.

Two-time NCAA singles champion Nicole Gibbs welcomed a day off since Azarenka was in action, as the former Stanford standout had spent a lot of time on court the last couple weeks.

“It was awesome tonight, loved having Vika out here. The fans were amazing and we were sold-out so it was awesome,” said Gibbs. “I definitely needed a day off my feet so that was perfect for me, and I can’t wait to play on Monday.”

Orange County snapped a four-match losing streak against San Diego, having lost all four matchups last season to the team just down south.

Ward and Bambridge have had a strong start to the season, winning three of their four men’s doubles matches, with their only loss coming to Ken Skupski and Feliciano Lopez of the Orlando Storm in a tiebreaker to start the season.

WTT CEO Carlos Silva was in attendance at a Breakers home match for the first time, and he was joined by Aviators and league owner Fred Luddy who was on hand to watch his squad compete.

The Breakers return to action on Monday evening when they host the first-place Springfield Lasers with 2013 WTT Male Rookie of the Year Steve Johnson playing in the first of three matches this season for Orange County. Follow results on WTT.com/schedule, and watch the match live at WTT.tv and ESPN+. The Aviators will get a crack at the Lasers first, hosting Springfield for a Sunday night battle that will be exclusively live on ESPN+.