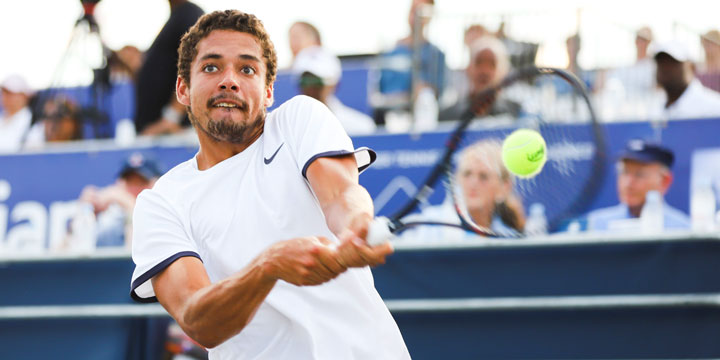 The Kastles were an early season favorite with five-time Grand Slam champion and world #7 Bruno Soares and Wimbledon mixed doubles champion and world #20 Nicole Melichar leading the core roster. But injuries forced Melichar to withdraw from competition this season and sidelined Soares for almost the entire first week, making it a hard start to the season. The front office has been left scrambling to find last-minute substitutes.

The Kastles started the match strong. The evening began with a rematch between Kastles rising star Yoshi Nishioka and Empire rookie Ulises Blanch in men’s singles. Blanch got the better of Nishioka in New York in their first encounter, but the Japanese world #73 was superior on his home court. After dropping serve in the first game, Nishioka fought back to break Blanch twice, forcing the Empire to attempt risky shots to dig himself out of the hole. Overall, the Kastles southpaw played a more consistent ground game, and was particularly deadly with his two-handed backhand, but captured the first set, 5-2, with an easy volley winner.

The next set pitted Kastles teen phenom Marta Kostyuk against WTT veteran and former world #13 Kirsten Flipkens in a women’s singles contest that surprised most everyone in the stadium. After breaking the Empire in the first game, Kostyuk appeared to have Flipkens figured out. The Empire relentlessly attacked the net, but Kostyuk answered with overwhelming force and a string of lethal passing shots.

The set seemed to be in hand for Washington, after Kostyuk broke Flipkens at 3-3, then hit an ace in the next game to earn three set points at 40-15. But the wily veteran slashed her way out of trouble with a combination of off-pace slice returns that caused the young Kastle to miss and drop the game on a deciding point to force the set to a tiebreak. Emboldened by her unexpected fortune, Flipkens fearlessly attacked Kostyuk in the breaker, winning the first three points. With the mini-break in her pocket, Flipkens served out the breaker and took the set with a volley winner, 5-4(1), to shrink the Kastles lead to 9-7.

The Empire made substantial headway in the third set in mixed doubles. New Kastles sub Nicholas Monroe, playing his first match for Washington, and recently-signed Kastles roster player Kaitlyn Christian had a tough task to dismantle Empire stars Neal Skupski and Maria Jose Martinez Sanchez, one of the best mixed doubles teams in the league.

The Empire broke the Kastles duo in the first game on a deciding point, then held Skupski’s serve to tie the overall score at 9-9. The Kastles then dropped serve again on Christian’s serve to give New York the lead for the first time in the match. The Empire continued to roll from there. Down 0-4, Monroe held serve, saving three game points, to earn a valuable game for Washington, but Skupski served out the set in the next game at love, 5-1, to secure the lead for New York, 12-10.

In the fourth, Christian and Kostyuk teamed up in women’s doubles against Flipkens and Martinez Sanchez to try and tug the score back in Washington’s favor, but the Empire pushed back. The New York duo held and broke Kostyuk at love to start the set, then traded breaks to take a 3-1 lead.

Undeterred, the Kastles fought hard to force a deciding point on Martinez Sanchez’s serve, then delivered a one-two, return-volley, knock-out punch to score a late break. But the Empire didn’t lose focus. They broke back in the next game on Kostyuk’s serve and held to secure the set, 5-2, and advance the Empire 17-12 heading into the fifth set.

The final set of the evening featured the return of Kastles doubles star Soares to the lineup. The Brazilian world #7 has been sidelined this season by injury, but had his sights set on winning the final set with Monroe in men’s doubles to force play into overtime. In his first match of the season, Soares hit some huge serves and returns and smash winners, worthy of a five-time Grand Slam champion, but the Kastles were up against Blanch and Skupski, who have several matches under their belt together at this point in the season.

The duo were in-synch on serve and rock-solid on their returns. After both teams held serve the first four games, the Empire broke Monroe to tip the set in their favor. Returning down 3-4, Soares and Monroe broke Skupski to force a tiebreak, largely due to a sensational effort from Soares. But Skupski and Blanch jumped ahead early in the breaker, scoring a mini-break on Monroe’s serve, then holding both of their service points to put the pressure on Soares to keep the match alive. With a 3-1 advantage, the Empire went for broke on their returns and captured both points on the Soares serve to notch the set, 5-4(1) and the victory for New York, 22-16.

After their win in DC, the Empire are now tied for third place with the San Diego Aviators. Both are 3-3 so far this season. The Kastles, meanwhile, are 0-5.

The Empire play the Orlando Storm in New York on Sunday, July 21 at 5 p.m. EST. Feliciano Lopez will headline for Orlando. Watch LIVE on ESPN+/WTT.tv. On Monday, July 22, the Kastles host the Storm in DC. Watch LIVE on CBS Sports Network at 7 p.m. EST.