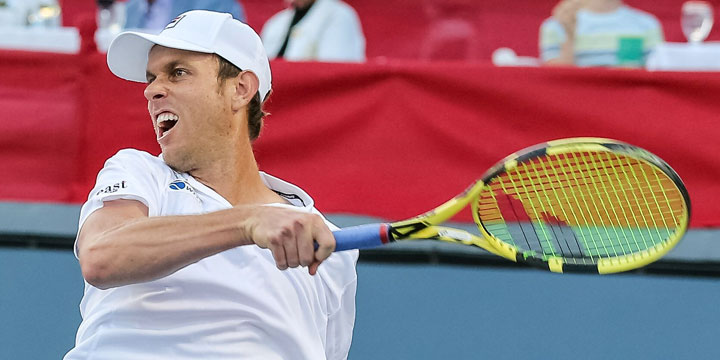 The Rollers built a commanding 10-3 lead by winning Mixed Doubles and Women’s Doubles to open the match on a cool, breezy evening. The Aviators closed the gap to 13-8 when Taylor Fritz and Jonny O’Mara teamed for a 5-3 win in Men’s Doubles over Sam Querrey and Matt Reid.

The clutch play of Harriet Dart in the next set may have been the difference for the Rollers on Friday night. Just when it looked like the Aviators were climbing back into the match after winning Men’s Doubles, the 22-year-old Dart from Great Britain regained the momentum for the Rollers in Women’s Singles.

At 3-3 in Women’s Singles, Dart scored a critical service break when Danielle Lao’s crosscourt slice back hand fell into the net to give Vegas a 17-11 lead. Dart easily held serve in the next game to close out the set 5-3 and extend the Rollers advantage to 18-11.

“I definitely had a bit of a shaky start, it was a little tough out there, but I kept it together and played really aggressive and got the win,” Dart said after the match. “It’s good for us, as we’re heading into our home matches.”

The last set of the night featured a high-anticipated rematch in Men’s Singles between Querrey and Fritz. The last time they met, Fritz won his first career ATP Tour singles title with a 6-3, 6-4 decision in Eastbourne, Great Britain.

On this night however, Querrey clinched the victory for Vegas as he dispatched Fritz 5-4 in 20 minutes.  Following his win in Men’s Singles, he was asked if his loss to Fritz last month played a factor.

“No not at all. This is more us playing for our teams, and I was glad to get a win and help our team win. We’re going to probably play many more times in the future, in World Team Tennis and real tournaments, so there will be other times to get him back,” he said.

After winning three of four matches on their season opening four-match road trip, the Aviators overall record falls to 3-2. Vegas improves to 2-3 with tonight’s victory.

Friday’s WTT match marked the start of another chapter in the long colorful tennis history at Omni La Costa Resort & Spa. Since the days of celebrity tennis tournaments during the tennis boom of the 1970s, the resort has been a Southern California tennis destination. The late Pancho Segura, a tennis Hall of Famer, coached at the resort for over 30 years. During that time, the United States Davis Cup team, featuring American stars such as John McEnroe, Brad Gilbert and Michael Chang, won four ties played at the resort during the 1980s and 1990s. The resort also hosted a WTA tournament for over 20 years as many of the game’s greatest legends, including Steffi Graf, Monica Seles, Martina Navratilova, Venus and Serena Williams, graced the courts at La Costa with their presence.

On a festive home opening night, the Aviators welcomed Leif Shiras, who was part of the CBS Sports Network broadcast team. With a smoothing, calm voice, the 58-year-old Shiras has called matches on Tennis Channel, British Sky Sports and FSN. Playing from the late 1970s through the early 1990s, he made his mark on the ATP Tour in 1984, reaching a career-high No. 31 in the singles rankings. A strong grass court player, Shiras reached the singles final at Queen’s Club that same year, losing to fellow American John McEnroe. He also reached the fourth round at Wimbledon in 1989. During his professional tennis career, Shiras had notable wins over Grand Slam singles champions Pete Sampras, Ivan Lendl, Andres Gomez, Petr Korda and Sergi Bruguera.

The Aviators will meet the Orange County Breakers at 4 p.m. (PDT) on Saturday, July 20 at Breakers Stadium at Palisades Tennis Club in Newport Beach, Calif.  Taylor Fritz will make his final appearance of the season for the Aviators. Former World No. 1 Victoria Azarenka will be in the line-up for the Breakers. The match will mark the first meeting between the Aviators and Breakers in 2019. After losing to the Breakers 22-18 in the 2017 WTT Finals, the Aviators swept all four head-to-head matches against the Breakers in 2018.

Follow results on WTT.com/schedule or sandiegoaviators.com.  The match will be broadcast on CBS Sports Network.