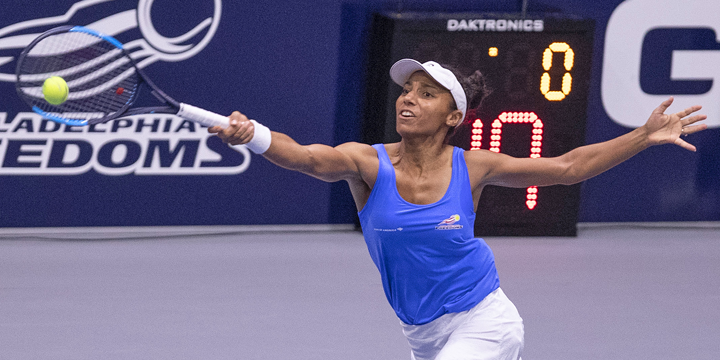 PHILADELPHIA – The Philadelphia Freedoms weathered a late Storm by Orlando to post a 23-15 win at Hagan Arena in the second of back-to back matches against the squad from Central Florida. The win was the fifth straight for the Freedoms since their opening night defeat at Springfield.

“I think we are at a point of the season where these players are gaining confidence,” said Freedoms coach Craig Kardon. “Raquel (Atawo), Taylor (Townsend) and Fabrice (Martin) are playing at a high level with a lot of consistency. We have also had a couple of players come in and out and Fabrice has done a great job of working with them.”

“We have a great time together,” said Raquel Atawo, who won her mixed doubles set with Fabrice Martin before closing the night with a victory in women’s doubles with Taylor Townsend. “Taylor really helped us tonight climbing back and almost winning her singles match and the guys did a great job setting the tone early.”

Richard from @BrandywineSPCA was the All-Star during our fabulous Freedoms ball dogs! pic.twitter.com/ofhvfi5vL6

With the Freedoms leading 15-9 after the men’s doubles set, which was played third this evening, Orlando’s Whitney Osuigwe looked as though she was going to put Orlando right back into the match in her singles set against Philadelphia’s Taylor Townsend.

Leading 4-1, Osuigwe saw Townsend creep back into the set and was holding a tenuous 4-3 lead with the ball on Townsend’s racquet to try and level the set at 4. However, Osuigwe had other ideas and broke Townsend right back to earn an important 5-3 win and snap Townsend’s 17 match win streak in women’s singles dating back to last season.

“Whitney played amazing tonight for Orlando but to see Taylor come back from what easily could have been a 5-1 set was really important,” said Kardon.

In women’s doubles, Philadelphia’s Atawo and Townsend set the tone early and cruised to a 5-1 victory to seal the win for Philadelphia.

“We played well tonight but Philadelphia played just a little bit better especially in the 3-all points,” said Orlando coach Scott Lipsky, who played five seasons of WTT for three different teams (New York Buzz, Boston Lobsters and Orange County Breakers). “Whitney did a great job in her singles match against Taylor who had not lost in long time and Feliciano (Lopez) is getting adjusted to the format and is getting better every day.”

Just as they have done all week, the Freedoms set the tone early picking up wins in mixed doubles with Atawo and Martin defeating Ken Skupski and Darija Jurak 5-2 before newcomer Mitchell Krueger fought back from an early 2-1 deficit to hand Evan King a 5-4 (3) defeat giving the hosts a 10-7 lead after the first two sets.

The men then took the court for doubles action and once again Fabrice Martin displayed his leadership for Philadelphia helping Krueger navigate his way through his first WTT match against Skupski and Lopez.

With the set tied at 2-2 and Lopez serving for the visitors, the Freedoms would earn the key break before cruising to the 5-2 win and give the Freedoms a 15-9 lead heading into halftime.

In the four home matches for Philadelphia, the mixed doubles matches have started at 2-2 with Philadelphia winning three of the four matches

The Freedoms return to action on Sunday afternoon when they travel to Las Vegas to face the Rollers in what will be the first of four road matches before returning home next Friday night where they will face the Washington Kastles. The Freedoms match on Sunday afternoon begins at 3:00 PM.  Watch live on ESPN+ or WTT.tv or follow along on WTT.com/schedule or at Philadelphiafreedoms.com.