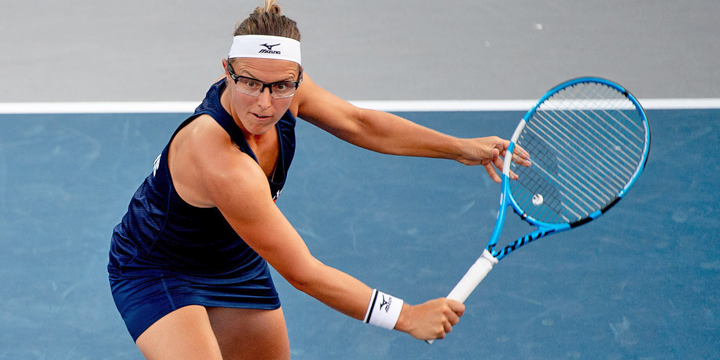 BRONX, N.Y. – On a day in which air temperatures approached 100 degrees, the New York Empire brought the heat on the court.

The home team won four of five sets from visiting Venus Williams and the six-time WTT champion Washington Kastles to score its second win of the season, 22-13, on Friday night at the Cary Leeds Center for Tennis and Learning.

The Empire cruised in the first half of the match, as Neal Skupski and Maria Jose Martinez Sanchez set the tone with a 5-1 win in mixed doubles over Williams and Nathan Pasha to begin the night, and New York lost just six games in the first three sets.

“We needed this win. The team has been so positive and every match, we’ve continued to build to this point,” Empire head coach Luke Jensen said after the match.

“We just played really good tennis. We had a lucky match where we just came out from start to finish, and executed well.”

Though Williams briefly pulled the Kastles closer with a 5-2 win over Kirsten Flipkens in women’s singles, Skupski and Ulises Blanch capped the night with an emphatic 5-2 win in men’s doubles to seal the victory.

“We have control of the lineup at home, but that’s when we’re at our best,” Jensen added.

“Our matches, when we start out with mixed with Neal and Maria like that, it sets the tone.”

The victory assured the Empire of avoiding a dubious stat early in the season: after losing on Thursday night to the then-winless Orange County Breakers, New York did not repeat that result against a Washington squad that was also looking for its first win of the season.

“I thought we played well throughout. I thought everyone turned up tonight and we were solid throughout,” Skupski said.

“It would’ve been a tough match against Venus coming in, but I thought we started well in mixed doubles and the pressure was put on them very early.

“I think it’s our best match so far, and hopefully, we can have the same result tomorrow when we play them in Washington.”

For the Kastles, it was youth and experience on show: in the women’s doubles, Williams partnered with Marta Kostyuk, 17, who was born in 2002 and is nearly 22 years her junior.

Williams had already won four of her seven Grand Slam singles titles before Kostyuk was born.

The Ukrainian teenager made the third round of the Australian Open as a 15-year-old in 2018, while Williams recently suffered defeat at Wimbledon to another 15-year-old Grand Slam sensation in American Coco Gauff.

Gauff called Venus “an idol” In London — and in the Bronx, Kostyuk echoed similar sentiments.

“It’s really, really nice to share a court with her. It’s a great experience,” Kostyuk said. “It’s such a privilege and I’m honored to be a part of a team that has Venus in it.”

“We have the same job — she’s a tennis player also, and she’s the same person just like everyone else when we are all together. It’s a great opportunity. I know she’s going to play next week too, so it’s great.”

The Empire and Kastles will face off against on Saturday night in the nation’s capital, with first serve set for 7:30 p.m. at Kastles Stadium at Union Market. Follow results on WTT.com/schedule or at nyempiretennis.com, and watch the match live at WTT.tv and ESPN+.