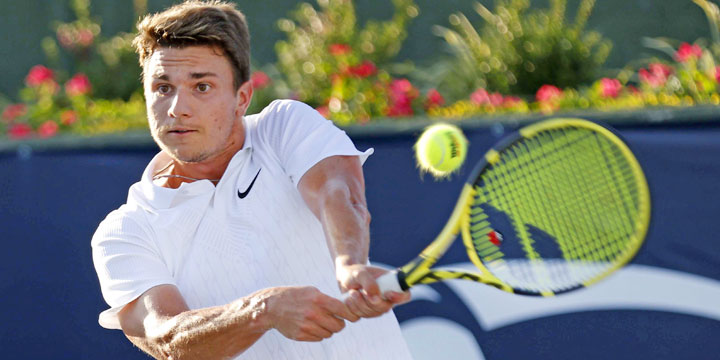 SPRINGFIELD, MISSOURI — The humid Ozarks air seemed to zap a little energy out of the Springfield Lasers, playing their fourth World TeamTennis match in five days. Thankfully veterans Jean-Julien Rojer and Abi Spears were there to shock the Lasers back to life.

Rojer and Spears cruised to a 5-0 win in mixed doubles, the final set of the night, to rally Springfield past the Washington Kastles 21-17 at Cooper Tennis Complex. The Lasers are 4-0 on the season.

“We were being lackadaisical the whole night,” Rojer said. “We were trying our best, but it wasn’t happening for us. I thought we needed a boost. (Washington) had more energy than us, so I wanted to change that at the end.”

Nobody brings energy quite like Jules. He yelled and fist-pumped his way through the set, then ended the match with an overhead smash.

Rojer and Spears raced ahead to a 2-0 lead against Kaitlyn Christian, who was making her debut for the Kastles, and Nathan Pasha, who was playing his first WTT match. Washington coach David Macpherson subbed Marta Kostyuk for Christian, trying to turn things around, but that didn’t work. Not much was going to stop Rojer and Spears, WTT’s top mixed doubles team.

“It’s great to have Jules in there and Abi served really well,” Springfield coach JL de Jager said. “If you can win when you play bad, that’s the sign of a good team. We dug deep tonight and I was very happy. It was a team effort tonight.”

Springfield got off to a great start, with Miomir Kecmanović beating Yoshihito Nishioka 5-2 in men’s singles. Kecmanović wraps up his four-match stay in Springfield with a perfect 4-0 record, winning 20 of 30 games. He departs now to return to the tour.

But Washington (0-3), didn’t stay down long. Kostyuk won a 5-4 (5-1) thriller against Anna Blinkova, in a showdown of rising stars. The nine-point tiebreaker was 1-all, but Kostyuk, 17 years old, pounced on 20-year-old Blinkova’s errors to win the set.

“Marta was phenomenal tonight. She was going for broke and playing with a lot of power and intensity,” Macpherson said.

Nishioka and Pasha got an early break to put a stranglehold on the men’s doubles set, which they won 5-3. Kostyuk teamed up with Christian to take women’s doubles 5-4 (5-2), the second 9-point tiebreak win on the night for Kostyuk. That gave Washington a 17-16 lead heading into the final set. But they wouldn’t lead again.

“I counted six games where we had two game points or three game points where we lost,” de Jager said. “We really tried hard to lose. I’ve never been in a match where we dominated so much and yet were in a position where we were one game behind going into the last set.”

Macpherson, meanwhile, felt good about this team’s performance on the night — especially with a roster completely made up of WTT rookies.

“I’m so proud of them. I thought they did amazing. Springfield is a great team, so deep and well coached. Our team came in and really put up a hell of a fight. But Jules was just spectacular in the fifth set. He was the difference maker tonight.”

The Queen City South Chorus of the Sweet Adelines performed “The Star-Spangled Banner” before the match.

Missouri Sports Hall of Fame broadcaster Ned Reynolds — a noted tennis fan — was at Cooper Tennis Complex. He hosted his radio show, Ned Talk, live on location before the match.

Kostyuk, with her back to the net, hit a clever shot between her legs that Blinkova returned into the net. As the crowd grew quiet for the next serve, someone shouted “Nice shot!” Kostyuk quickly replied, “Thanks! Finally!”

Three members of the Springfield City Council were at the match: Jan Fisk, Andrew Lear and Mayor Pro Tem Phyllis Ferguson. Ferguson is a former member of the Springfield-Greene County Park Board, which owns the Lasers.

The Kastles head east and visit the New York Empire tomorrow at 6:30 p.m. Eastern. They’ll be joined by superstar Venus Williams and the match will be televised on ESPN+. Springfield hits the road for the first time this season when they travel to Vegas to square off with the Rollers Saturday. Vegas is loaded for that match, with Bob and Mike Bryan, Monica Puig and Sam Querrey all featuring. ESPN+ and WTT.tv will broadcast the 5 p.m. Pacific match. Follow results live at WTT.com/scores, SpringfieldLasers.com and WashingtonKastles.com.