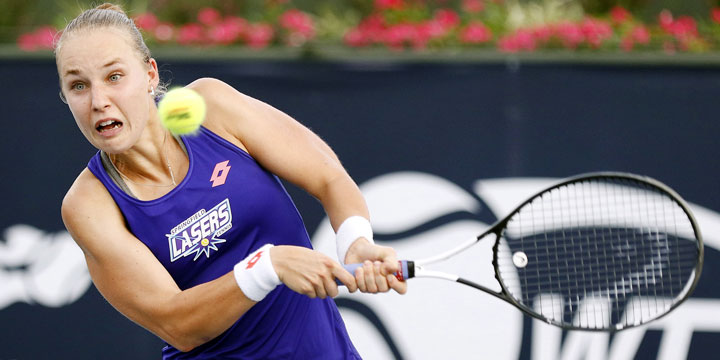 SPRINGFIELD, MISSOURI — A double fault on match point in a nine-point tiebreaker. It was that kind of night for the New York Empire.

They dropped all five sets to the Springfield Lasers in a 25-13 World TeamTennis loss at Cooper Tennis Complex.

“To be honest, I was very impressed with Springfield’s serving,” New York coach Luke Jensen said. “Once they got some momentum, every time there was a big point in play, they got it. They’re the defending champions for a reason and they’re in first place for a reason.”Much of the drama was gone from the night when María José Martínez Sánchez put the final serve into the net. The miscue made the final score 5-4 (5-4) in mixed doubles, but Springfield’s Jean-Julien Rojer and Abigail Spears earned the victory over Martínez Sánchez and teammate Neal Skupski.

They held serve all night and got great play at the net from Spears in the tiebreaker. All five Lasers turned in highlight reel performances in the dominating win, which started with back-to-back 5-2 wins in singles play.

“I believe in the scoreboard pressure,” Springfield coach JL de Jager said. “It was 10-4, so every game you lose then is a game you have to try to make up later. I’m very happy. We were strong in every set.”

Miomir Kecmanović led off in men’s singles, fighting off upset-minded Ulises Blanch. Blanch took the first two games before Misha roared to life and won five straight games. Kecmanovic, the MVP of last year’s WTT Finals, has won all three sets this season, taking 15 of 23 games in the process.

Anna Blinkova was dominant in women’s singles, breaking Kirsten Flipkens twice. The first break made it 2-1 Blinkova. The second break sealed the win. Blinkova, a WTT rookie, has won her last two singles sets and is looking comfortable in the format.

“(WTT) is absolutely different. It’s incredible for me,” Blinkova said. “I like it very much and I’m trying to do my best every match. It helps me a lot to have teammates and a coach. They are cheering for me, they help me, they support me all the time, if I win or I lose.”

Springfield’s men’s doubles team of Rojer and Enrique Lopez Perez won its first set of the season, earning a 5-2 decision over Blanch and Skupski.

“I was really happy with the boys,” de Jager said. “Enrique isn’t used to this level of doubles, so sometimes he’s just out of position or just misses a volley. We’ve been working on it. Today he was very good and made some crucial points.”

Blinkova and Spears, meanwhile, are turning into a dynamic duo for the Lasers. They topped Flipkens and Martinez Sanchez 5-3, winning their third set in three tries.

“We’ve got to keep going,” de Jager said. “Mish’s leaving soon, and the last week Jules and Anna won’t be here. So we’ve got to push now and see if we can get a lot of wins before that happens.”

The national anthem was sung by Reid Jarvis, who grew up playing tennis on the courts at Cooper Tennis Complex. Jarvis, now playing collegiately for Drake University, also provided pre-match musical entertainment in the Champions Club.

The Lasers and Empire started the match under a heat advisory. The temperature in Springfield at match time was 92 degrees, with a heat index of 99. The Springfield-Greene County Park Board concessions stand offered special prices to help fans beat the heat.

The music faded out and the crowd grew quiet before Lopez Perez served in the fifth men’s doubles game. Just then the chair umpire announced 45 seconds were left in the TV timeout. “Well, we need music then,” Lopez Perez said. The music cranked right back up on his command.

New York returns home to face the Orange County Breakers at 6:30 p.m. Eastern on ESPN+ and WTT.tv. Sloane Stephens, ranked eighth in WTA singles will feature for the Empire. The Lasers wrap up their four-match home stand with a 7 p.m. visit from the Washington Kastles. It’s Kecmanovic’s last night with Springfield before he returns to the ATP Tour. The match will be carried by ESPN+ and WTT.tv. Follow results live at WTT.com/schedule, SpringfieldLasers.com and NYEmpireTennis.com.