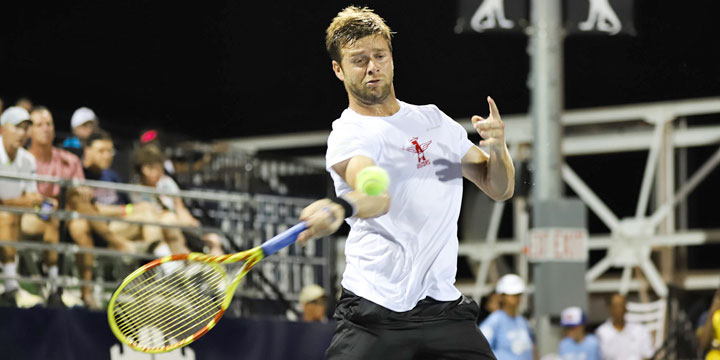 Washington D.C. – The visitors scored another win over the hometown Washington Kastles at their brand new stadium on Union Market.

In an epic, tug-of-war match, the 2016 King Trophy-winning San Diego Aviators edged the six-time WTT champion Kastles in a fifth-set super-tiebreak, 20-19, to move into second place in the league standings, behind the defending WTT champs Springfield Lasers.

After the Kastles loss on Monday night to the Rollers, Kastles Coach David Macpherson made some changes to the lineup and order of play. He opted to begin the evening with the biggest gun in Washington’s arsenal, DC phenom and current singles world #38 Frances Tiafoe and new Kastle Shelby Rogers in mixed doubles. The strategy paid off. The Kastles duo came back from a 1-3 deficit against Aviators star Anna-Lena Groenefeld and her new teammate Jonny O’Mara and took the opening set in a tiebreak, 5-4.

Rogers continued to earn for Washington in the second set. Coach Macpherson tapped the Charleston native to take on WTT star Christina McHale in women’s singles. After dropping the opening two games, Rogers fought back and took the set in another tiebreak to push Washington ahead, 10-8, in the overall score.

The Aviators unloaded their biggest weapon in the next set in men’s doubles: 2017 French Open men’s doubles champion and 2016 WTT champ Ryan Harrison. The San Diego slugger and O’Mara, broke Tiafoe and Kastles southpaw Yoshi Nishioka with commanding returns and net play to record a 5-1 victory and capture the lead for San Diego, 13-11. Harrison served out the set with ease.

But the Kastles tugged back in the fourth set, when Rogers returned to the court with Kastles teen sensation Marta Kostyuk to take on McHale and Groenefeld in women’s doubles. Rogers and Kostyuk caught fire at 1-1, breaking McHale at 30-40, then holding Kostyuk’s serve at love to secure the lead in the set, 3-1, and tie the overall score, 14-14. From there, the pair steamrolled their way to a 5-1 set and a 16-14 lead heading into the final, feature set of the night: Tiafoe vs. Harrison.

It was a tense first league encounter that escalated in intensity with each game. But the Aviators got the upperhand in the third game, when Tiafoe inexplicably dropped his serve at love to gift the Aviators a valuable break. Harrison then held to go up 3-1 in the set and tie the overall score at 17-17, which increased the stakes of every shot for both players.

After Washington’s loss on Monday to the Vegas Rollers, the Kastles are now tied for last place with the Orange County Breakers. The teams will square off on Wednesday in DC in the Kastles’ last match of their season opening homestand.

Next up, the Aviators play the Storm in Orlando and the Kastles play the Breakers in Washington Wednesday at 7:00 p.m. EST. Watch LIVE on ESPN+/WTT.tv and follow results on WTT.com.