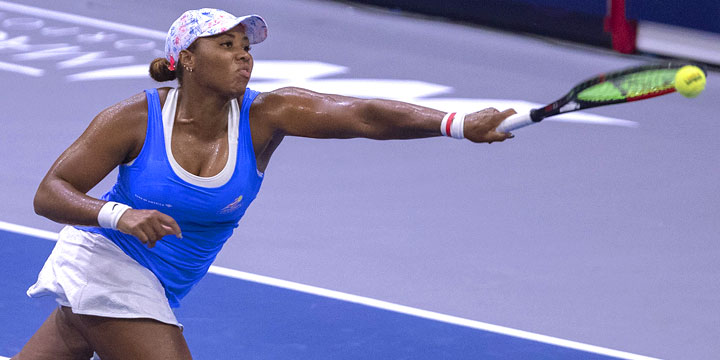 PHILADELPHIA, PA – With the different pressure situations that can occur throughout the World TeamTennis season, Philadelphia Freedoms coach Craig Kardon decided to switch the order of play to see how his team would respond.

Riding a two-match winning streak, the Freedoms passed the difficult test holding off a feisty Vegas Rollers team 21-16 in a matinee affair on Wednesday afternoon at Hagan Arena.

After closing with the men the past two nights, Kardon put Taylor Townsend in the anchor position and the reigning WTT Female MVP did not disappoint.

With the Freedoms holding a tenuous 16-14 lead heading into the women’s singles it appeared as if the Rollers would close the deficit to 18-17 midway through the set, but Townsend had other ideas.

With the set tied at 2-2 and Townsend trailing 0-30 against WTT newcomer Harriet Dart, Townsend would regain her focus to win the next four points and give her team the 3-2 lead in the set and a 19-16 lead overall.

#WTT2019 @TaylorTownsend of the @PhillyFreedoms 🛎️ wins her 16th consecutive Women's Singles set as @BillieJeanKing cheers her on! Check out her match point against the @VegasRollersWTT 🎲

“I was down on my serve and knew I had to regain my focus,” said Townsend. “To come back and win that game gave me confidence.”

From there, Townsend would break Dart the following game before closing out the final set and the match in convincing fashion to provide the final margin of victory.

“Taylor is our workhorse and we can always depend on her,” said Kardon. “Raquel was amazing this afternoon. The girls really held the guys up today. Trailing 0-30 and coming back to win the game and then close out the set was unbelievable. For her to come through under pressure was great to see.”

“I told Craig it’s his job to figure out the best match-ups where everyone would feel comfortable,” said Townsend. “I am fine with finishing. I think it’s fun and it’s like a little bit of added pressure to be able to close out the match for your team.”

As he has done the past two nights, Kardon opened play with the mixed doubles team of Fabrice Martin and Raquel Atawo. Unlike the past nights, the duo could not pull off the win dropping a 5-4 decision to Matt Reid and Asia Muhammad.

Faced with a deficit for the first time at home, the Freedoms women’s doubles tandem of Atawo and Townsend displayed their early season success again pulling off a 5-2 win to give their team a 9-7 lead.

Philly would build on their lead in men’s doubles with Donald Young and Martin posting a 5-2 win against Reilly Opelka and Reid to take a 14-9 lead into halftime.

Vegas would get right back into the match thanks to Opelka who handed Young a 5-2 defeat. The set could have been closer but Opelka rallied from 15-40 to hold serve before coming right back to break Young and take a 3-1 lead en route to the victory setting up the thrilling finish.

“I was just trying to pull our team back into the match,” said Opelka, who reached the third round of Wimbledon. “I was not focused on the score or winning by a certain margin. When you try to win every game that’s when things can get messy. I was just trying to win the last point.”

The Freedoms go on the road Thursday where they will face the expansion Orlando Storm while the Vegas Rollers return to action on Friday night against the San Diego Storm. The Freedoms match tomorrow night begins at 7:00 PM.  Watch live on ESPN+ or WTT.tv or follow along on WTT.com/schedule or at Philadelphiafreedoms.com.