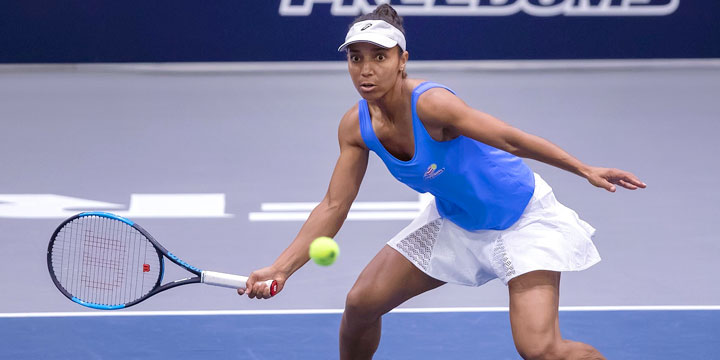 PHILADELPHIA, PA – The Philadelphia Freedoms backed up their convincing win on Monday night with a hard fought 23-15 win, that needed Extended play, over the Orange County Breakers on Tuesday night in front of a spirited crowd at Hagan Arena on the campus of St. Joseph’s University.

With the trailing team never being out of the match and being able to force Extended play by winning the final set, the Breakers did just that thanks to the men’s doubles team of Luke Bambridge and James Ward who defeated Philadelphia’s Fabrice Martin and Donald Young 5-3 to force the extra session.

In Extended Play, Martin took control right away for the Freedoms by serving out the match for the win to keep Philadelphia undefeated at home on the young season.

“In Extended Play I just tried to serve well and do what we did the last two or three games,” said Martin, who is playing his 4th season for the Freedoms. “We had so much advance that I wasn’t really nervous. We all played good and the energy was great.”

The energy Martin described has been key to Philadelphia’s early season success at home. In what looked to be a replay of last night, the Freedoms mixed doubles team of Martin and Raquel Atawo were locked in a tight battle against Bambridge and Andreja Klepac before snapping a 3-3 tie to win the set 5-3 and give Philadelphia the early advantage.

The women’s doubles team of Taylor Townsend and Atawo once again seized control winning their set 5-1 over Nicole Gibbs and Klepac to give Philadelphia a 10-4 advantage after the first two sets.

“Tonight could have been different but the ladies (Taylor and Raquel) played lights out again,” said Freedoms coach Craig Kardon.

The third set featured Young for the Freedoms and WTT newcomer Ward for the Breakers. Knowing his team needed to get points on the board, Ward did his best to keep Young, who reached #38 in the world in singles on the ATP Tour back in 2012 off balance.

Holding a 4-2 advantage it appeared as Ward was headed for the easy win. Young had other ideas as he fought back to even the set at 4-4 and force a tie-break. In the tie-break the two battled back and forth before Ward prevailed 5-3 to win the set and slice Philadelphia’s lead to 14-9.

“I was trying to keep us alive,” said Ward following the match. “Everyone was doing their best, but Philadelphia’s ladies had a strong day and I was just doing my part to get back some points and keep us in the match.”

“It was a good thing we had a big lead heading into the men’s singles but Donald coming back and making it into a match and almost coming back to win the set was very important,” said Kardon.

Following halftime, Taylor picked up where she left off on Monday and rolled to a convincing 5-1 victory over Gibbs to give Philadelphia the 18-10 lead setting up the dramatic ending.

“I am happy for the team that they were able to keep the momentum going,” said Kardon. “We will now turn our attention to tomorrow afternoon’s match against Las Vegas.”

• The Freedoms the second annual Tennis for Teal night benefitting the Sandy Rollman Foundation as they continue to raise funds in the battle against Ovarian Cancer.
• In attendance was Freedoms owner Billie Jean King

The Freedoms will return home tomorrow afternoon to face the Las Vegas Rollers, who lost to the New York Empire 24-16 while the Breakers travel down to Washington to face the Kastles who fell to the San Diego Aviators in a SuperTiebreak. The Freedoms match will begin at 1 pm. Watch live on ESPN+ or WTT.tv or follow along on WTT.com/scores or at Philadelphiafreedoms.com.