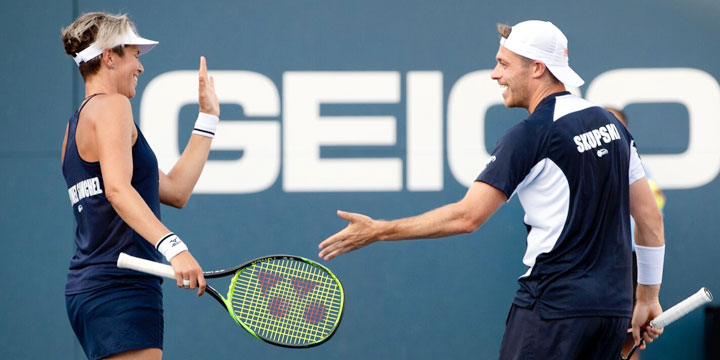 BRONX, N.Y. – It might be a little early to dub just the second match of the 2019 World TeamTennis season as a ‘must-win,’ but New York head coach Luke Jensen certainly managed Tuesday night’s match at the Cary Leeds Center for Tennis and Learning like it was one.

He even called in a secret weapon.

“One of the positives about being at Cary Leeds is someone I deeply respect in [director of tennis and development] Liezel Huber,” Jensen said. “It was a day off, and we were practicing, and she grabbed me by the throat, and said, ‘What are you doing?’

“She’s a Hall of Fame kind of talent, seven Grand Slam titles, been a champion of World TeamTennis. I’ve played it, she’s played it, and she just felt, ‘Have you looked at it another way?’”

After getting off to a slow start in Sunday’s season opener, with his team losing 15 of the first 19 games, Jensen made the decision to flip his lineup around, beginning with mixed doubles — which was the third set on Sunday night — playing the men first, third and fifth, and moving women’s singles to the second half.

“We drafted around our championship women. Throwing them out there, we just didn’t adjust. She said, ‘You’ve gotta play the men first, third and fifth…serve [them] first when you have an advantage when you’re at home,” Jensen said. “And then you play the women, the more return-dominant kind of game.

“She gave me that insight and that perspective, and she was our secret weapon for tonight.”

Maria Jose Martinez Sanchez and Neal Skupski set the tone for the night, as they posted a dominant 5-1 win in the opening set for New York, as the Empire won four of five sets en route to a 24-16 overall victory over the Las Vegas Rollers.

They nearly had a sweep, too, but Vegas’ Franchise player Reilly Opelka showed off the big serving that took him to an upset of three-time Grand Slam champion Stan Wawrinka at Wimbledon, as he saved three match points against Ulises Blanch to snatch the men’s singles set in a tiebreak in the third event.

In the second half, Flipkens rallied from a break down to beat Harriet Dart in women’s singles, 5-3, before Blanch and Skupski capped the night with a 5-4(1) win in men’s doubles over Opelka and Matt Reid — also from a break down.

“I think we had a good start,” Flipkens said. “A good start is really important. We had a good lineup…and I think, every match we played today, we were there.

“On Sunday, we didn’t have a feeling yet on the court…so I think it was good to have a hit yesterday [on the day off], and it paid off in all five matches today.

“I’m just happy with the win, and it gives us confidence going into the next matches.”

Speaking of Huber and Jensen’s WTT pedigrees: they have a combined 23 seasons of WTT experience.

Huber, a WTT champion with the Delaware Smash in 2003, was the 2011 Female MVP with the Saint Louis Aces and played 13 total seasons in the league, while Jensen played for five different franchises in his nine seasons as a player before debuting as the Empire coach this year.

On the other side: if she wasn’t making her World TeamTennis debut for the Rollers this season, or playing on Centre Court at Wimbledon while having her best result at a Grand Slam, Harriet Dart might’ve been primed for a guest starring role on CSI — before it got cancelled, anyway.

The 22-year-old from London previously spent her away from the tennis court studying, as she was pursuing an online forensic psychology degree before deferring to commit fully to her sport.

To celebrate Community Hero Night, the Empire welcomed, among other public servants in the community, the Color Guard of the New York City Police Department, the NYPD Police Band and members of the Bronx’s 42nd Precinct.

The Empire hit the road for the first time in 2019 on Wednesday night, traveling to defending WTT champions Springfield Lasers for an 8:00 PM ET match at the Cooper Tennis Complex. 2018 WTT Finals MVP Miomir Kecmanovic is expected to feature for the defending champions against New York, while Opelka and the Rollers head to Philadelphia for a 1:00 PM ET matinee against Donald Young and the Freedoms. Follow results on WTT.com or at nyempiretennis.com, and watch the match live at WTT.tv and ESPN+.