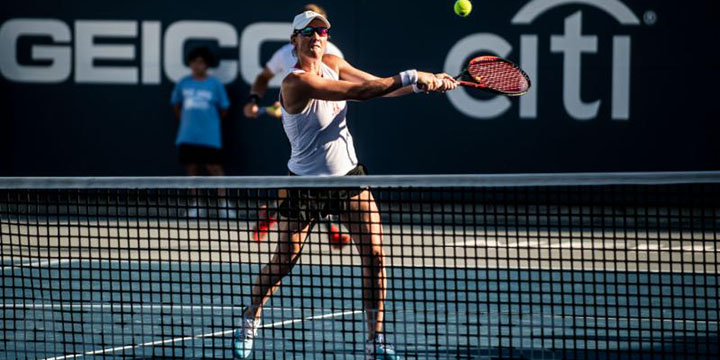 Washington, DC — In a surprise move Tuesday, the San Diego Aviators traded former NCAA doubles champion for USC Kaitlyn Christian to the Washington Kastles, just hours before the teams prepared to meet for the first time this season in DC. The 27-year-old, Orange, California native will play the remainder of the season for the Kastles as a substitute.

Christian made a flawless WTT debut this Sunday against the Empire in New York, dropping just two games in two sets to propel San Diego to victory in their first match of the season. She fell short in Philly last night against the Freedoms, as did the rest of the Aviators squad, who failed to win a set in the 25-11 routing.

Primarily known a doubles specialist, in 2013, Christian won the NCAA Championship, All-American Championship, and National Indoors Championship in doubles for USC, and on tour, she has notched 12 ITF doubles titles and reached a career-high ranking of #38 in the world. But in Hollywood, Christian is best known as Emma Stone’s body double for the tennis scenes in the recent blockbuster film “Battle of the Sexes,” about the life of WTT co-founder Billie Jean King and her iconic match against Bobby Riggs in 1973.

Christian will join the Kastles bench on Wednesday night against the Breakers, but is not scheduled to play until Thursday, when Washington travels to Springfield to face the defending WTT champion Lasers in the team’s first road match of the season.