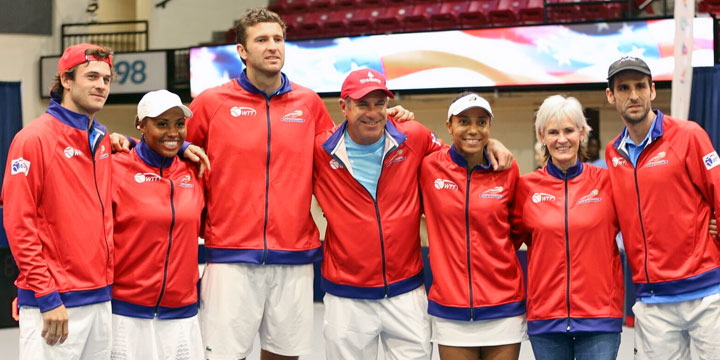 PHILADELPHIA, PA – Home Openers have not been kind to the Philadelphia Freedoms the past couple of seasons. On Monday night before an enthusiastic crowd at Hagan Arena on the campus of St. Joseph’s University the Freedoms broke open a close match to pull away for the 25-11 win.

“Tonight was great,” said Freedoms coach Craig Kardon. “Fabrice (Martin) got everything started from the first match. He got everyone excited and really set the tone. Raquel played amazing and then to see what our women’s doubles team did makes it all worthwhile.”

“Winning the deciding points is what World TeamTennis is all about,” said Kardon. “We talked about that last night as a team after having trouble last night against Springfield.”

“They played the deciding points better than us,” said Aviators coach John Lloyd. “We knew we had to keep it close the first two sets, but they picked it after the first break (in the middle of the set) and ran away with it from there.”

With the two teams locked at 2-2 in the first set, which featured mixed doubles, the Freedoms team of Fabrice Martin and Raquel Atawo secured the break over the Aviators duo of Ryan Harrison and Kaitlyn Christian to give the hosts a 3-2 lead. From there Philadelphia would take the next nine games to build what would turn out to be an insurmountable 11-2 lead.

Included in that nine game run was a 5-0 victory by Taylor Townsend and Atawo over Christina McHale and Christian in the second set. Harrison did his best to try and bring San Diego back but Tommy Paul (an injury replacement for Adrian Menendez-Maceiras) overcame some early nerves to post the 5-4 come from behind win to close out the match.

“It was amazing,” said Paul, who grew up outside of Philadelphia. “This was my first time playing World TeamTennis and I had a blast. Fabrice really helped me this evening especially playing doubles. I got the call last night and jumped on a flight from Florida this morning.”

• The Freedoms hosted Youth Tennis night and kids from Legacy Youth and Education as well as NJTL were in attendance.
• Working for the Freedoms front office this year will be Judy Murray, mother of former #1 player in the world Andy Murray. Murray will serve as Director of Plyer Personnel and Director of Community Engagement.

The Freedoms will return home tomorrow night and face the Orange County Breakers, who lost to the Orlando Storm 22-19. The match will begin at 7 pm. Watch live on ESPN+ or WTT.tv or follow along on WTT.com or at PhiladelphiaFreedoms.com.