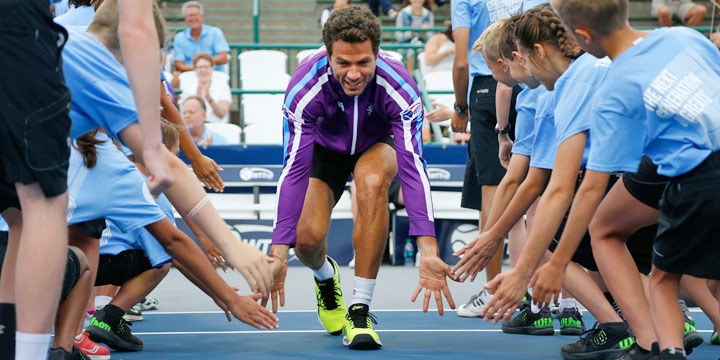 SPRINGFIELD, MO – The 2019 World TeamTennis season began the same way the 2018 season ended — with Miomir Kecmanović winning a thrilling men’s singles match to give the Springfield Lasers a win against the Philadelphia Freedoms.

Last year’s match was in Philadelphia and gave the Lasers their first WTT championship. Kecmanović, then an 18-year-old rookie, was nervous enough he deposited his lunch in a trash can. This year’s match, a 22-20 Lasers win at Cooper Tennis Complex, was lower stakes. Kecmanović still battled nerves, but handled them well.

“I was maybe a little nervous tonight, but not too much,” he said. “I’ve played a lot of these matches, so I already knew how to get into it.”

It showed. He battled Fabrice Martin deep into a tiebreaker, stealing two points off the lanky Frenchman’s serve to capture the set 5-4 (5-3). The victory showed just how much Kecmanović — affectionately known as Misha — has matured in the past year.

The match was as close as the final score indicates. Three sets went to tiebreakers. The Lasers won two of them. Jean-Julien Rojer, in his first match as a Laser since 2017, teamed up with Springfield newcomer Enrique Lopez Perez to clip Martin and Adrian Menendez-Maceiras in men’s doubles 5-4 (5-4).

“Jules is bringing a lot of energy to the team and he’s a great player,” de Jager said. “And Enrique, it’s his first night and he did awesome. He has a big serve.”

Philadelphia got its tiebreak win in women’s doubles, as veterans Raquel Atawo and Taylor Townsend topped Abi Spears and WTT rookie Anna Blinkova 5-4 (5-4). Townsend was solid all night for the Freedoms, defeating Blinkova 5-3 to cut Philadelphia’s deficit to 17-16 heading into the final set.

“It’s always tough playing the first match and this is a tough place to play,” Townsend said. “This is a fast court and it suited her game more. But I just tried to stay aggressive do what I know works for me.”

Springfield got off to a blazing start in mixed doubles. Rojer and Spears broke Townsend’s serve on their way to a 5-2 win. That early three-point edge proved to be crucial.

Kecmanović will play three more matches with the Lasers this week before returning to the tour. He said the WTT experience has definitely helped his game.

“I had a pretty good year after last season. broke the top 100 and played in some big matches,” he said. “I learned to fight for every point, because here every point matters. It’s helped me stay focused and be pumped the whole time.”

The Lasers welcomed City of Springfield and Greene County employees and retirees to the match. The crowd included Springfield City Council member Matt Simpson. The most popular attendee, however, was the King Trophy. It joined the Lasers on the court for pre-match introductions.

Philadelphia plays its home opener Monday at 7 p.m. Eastern. The Freedoms host the San Diego Aviators and featured player Ryan Harrison. That match can be seen on ESPN+ or WTT.tv. The Lasers get a night off before they get a visit from WTT newcomers the Orlando Storm and featured player Feliciano Lopez. CBS Sports Network will air that match. Follow results on WTT.com, PhiladelphiaFreedoms.com or SpringfieldLasers.com.