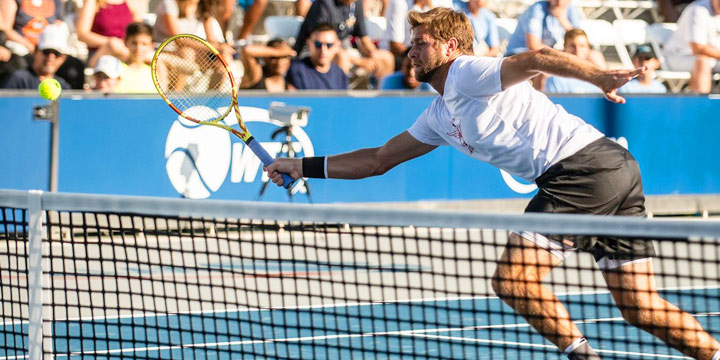 The key to victory for the San Diego Aviators in Sunday’s World TeamTennis season opener?

Franchise player Ryan Harrison clinched the win with a victory in the final event of the night, while his sister-in-law Christina McHale won both of the sets she played to lead visiting San Diego to a 23-11 win over the New York Empire in the first official match of the 2019 World TeamTennis season.

Harrison ultimately sealed victory for the visiting team with a 5-2 win against New York’s John Isner in men’s singles, as he broke his big-serving compatriot to love in the first game of the set, and added another break to end it.

“We have a lot of belief in each other’s games, and it’s great to be on the same team. It’s a lot of fun,” Harrison, who is married to McHale’s sister, Lauren, said after the match.

“I’ve only gotten to play with her once in a tournament. She had a better run with my brother in the US Open in mixed — they made the semifinals last year — so we’ve been in the family situation before.

“Against John, you just kind of get a feel for where you think he’s going to go [on serve], and hopefully lean the right way.

San Diego opened up a big lead over the first three disciplines, winning women’s doubles, women’s singles and mixed doubles by a combined 15-4 score, and despite the best efforts of Isner in the second half, New York proved unable to rally.

The Aviators dominated the women’s action, as McHale and substitute Kaitlyn Christian started the night with a 5-0 win over Kirsten Flipkens and Maria Jose Martinez Sanchez in women’s doubles, before McHale won the last four games against Flipkens to win women’s singles, 5-2.

In mixed doubles, Harrison and Christian lengthened the visitors’ lead with a 5-2 set, though a mid-set substitution of Isner for Neal Skupski by Empire head coach Luke Jensen helped put a game on the board for the home team.

“When we saw we were playing first, I told Kaitlyn that was great and that we were ready to go,” said McHale. “We were feeding off of each other. We had good energy, and I was feeling the energy from my teammates.

“I love having Ryan on the team, and he thrives in this World TeamTennis atmosphere. It was just comforting to me to know that he was on the sideline. He knows my game very well, so if needed to say something to Coach John to tell me, it was just great.”

Isner and Skupski later partnered to a 5-3 victory over Harrison and Jonny O’Mara in the doubles to set the stage for the concluding men’s singles.

The win for Harrison proved a perfect start to his summer, as the 27-year-old had been sidelined from competitive tennis since the French Open with an elbow injury.

“I’m almost 100 percent, and it’s always nice to come back into a situation like this — a fun environment for my first competitive match back,” he added.

“Hopefully it’s a springboard into a good summer hardcourt season.”

The 2019 league opener had star power in more ways than one, as it saw recent WTT major award winners on both sides of the net in addition to two Franchise players.

Despite the WTT pedigree between the two teams, it was Christian — acting as a substitute for Anna-Lena Groenefeld — who stole the show in her WTT debut, as she dropped just two games across the two doubles sets she appeared in.

The 27-year-old USC graduate owns a career-high ranking of World No. 38 as a doubles specialist on the WTA tour, but might also be well-known for her acting chops: she served as Emma Stone’s body double for the tennis scenes in Stone’s portrayal of WTT co-founder Billie Jean King in the movie “Battle of the Sexes,” which depicts King’s famous defeat of Bobby Riggs in the 1973 titular match.

The Empire are back home on Tuesday night, welcoming the expansion franchise Las Vegas Rollers to Cary Leeds for a 6:30 p.m. match, while San Diego travels to the Philadelphia Freedoms on Monday for a 7:00 p.m. match. Big-serving Reilly Opelka, fresh off of an upset of three-time Grand Slam champion Stan Wawrinka at Wimbledon, will feature for the Rollers in the Bronx on Tuesday. Follow results on WTT.com or at nyempiretennis.com, and watch the match live at WTT.tv and ESPN+.