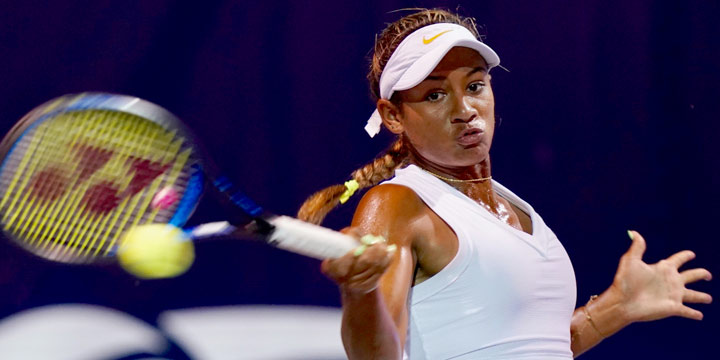 ORLANDO, Fla. – The two new franchises of World TeamTennis took their inaugural match down to the wire in an electric battle for the ages that saw the Orlando Storm defeat the Vegas Rollers by a score of 21-20.

“It was a great match,” said Orlando head coach Scott Lipsky, “With two expansion teams playing their first match, you couldn’t have asked for a better contest. We had a couple players who hadn’t played in the format before, so it was the perfect match to get them used to it.”

The night began with mixed doubles play as Orlando’s Darija Jurak and Ken Skupski squared off against Vegas’ Matt Reid and Jen Brady. The first game in the two franchise’s history went to the Storm as Skupski held serve. The two sides continued to trade games as Orlando went up 3-2. Down 40-15 in the sixth game of mixed doubles, the Storm rallied back to break serve and take a 4-2 lead. Orlando held serve to win the set 5-2.

17-year-old @whitney_osuigwe of the @OrlandoStormWTT erases a 1-4 deficit to come back and take down Jennifer Brady 5-4(3) in women's singles!

Vegas struck back in women’s doubles as Brady and Asia Muhammad edged Orlando’s Jurak and Whitney Osuigwe 5-4 (5-2). Vegas took the first game in the set before Orlando ripped off two consecutive to take a 2-1 lead. The Rollers won two straight games of their own, breaking back to take a 3-2 edge. Orlando wasn’t phased, taking a game easily and then stealing a deuce point to climb back up top 4-3. However, Vegas answered back to force a tiebreaker, which is best to five. In the tiebreaker, the two sides split the first four points before Vegas strung together three in a row to take the women’s doubles segment.

Orlando held a 9-7 lead heading into men’s doubles where Skupski and Feliciano Lopez teamed up against Reid and Evan Song for Vegas. After Orlando took the first game, the Rollers won two deuce points in consecutive games and came back from down 30-0 to even the match score at 10-10. Orlando matched Vegas’ three straight games with three of their own to take a 4-3 lead. Vegas again forced a tiebreaker by winning the next game, but were overpowered by Skupski and Lopez as they took men’s doubles by a score of 5-4 (5-1).

“The doubles play was good,” said Lipsky, “Doubles is so fast and there are lots of close sets when you play to just five. Good tennis all around. Feliciano and Ken are both great doubles players and Whitney and Darija played really well too. They hung in there and played well, I was proud of them.”

The 17-year-old Osuigwe was charged with holding the lead for the Storm as she was matched up against Brady. Brady took control early, winning the first three games and tying the match score at 14-14. Osuigwe took a game before Brady answered with a game of her own to go up 4-1.

“They say every game matters, so I really focused on that,” said Osuigwe, “I tried to hold my serve knowing I had a chance to break her and even if I only got one game it would help toward the team score.”

With her back against the wall and the crowd behind her, Osuigwe rallied and won three straight games to force a tiebreaker. She completed the immaculate comeback, winning her match 5-4 (5-3).

“It was amazing having the crowd behind me,” said Osuigwe, “This was the best first match anyone could get. I had a lot of fun tonight.”

Another miraculous comeback was needed to fend off the surging Rollers in men’s singles. Song took a quick 4-0 advantage over Orlando’s Lopez to even the match score at 19-19. Lopez fought through a match point to evade a Vegas victory. Song went on to beat Lopez 5-1, tying the match score at 20-all.

With the match even, a super tiebreaker was needed. Lopez and Song dueled to be the first to seven points in the super tiebreaker segment. The two traded the first four points of the super tiebreaker before Lopez pulled in front 6-2. Song came surging back to tie the segment at 6-6 which set up a match point. With Lopez serving, he went to a serve and volley that paid off, giving the Storm a 21-20 victory over the Rollers.

“I was not in control at the start,” said Lopez, “At one point my goal was just to win one point. In the tiebreaker I had a quick start up 6-2 and he came back to even it at six-all. In the last point I went all or nothing to a serve and volley and finally found a way. It was very tough.”

An electric crowd was on hand to witness two new franchises battle it out. The fans filled up the stadium court at the USTA National Campus, giving an edge to the Storm all night long.

The Orlando Storm are back in action on Monday, July 15 at home against the Orange County Breakers. The match gets underway at the USTA National Campus at 7:00 p.m. Eastern. Watch live on ESPN+ or WTT.tv or follow along on WTT.com/scores or at OrlandoStorm.com.