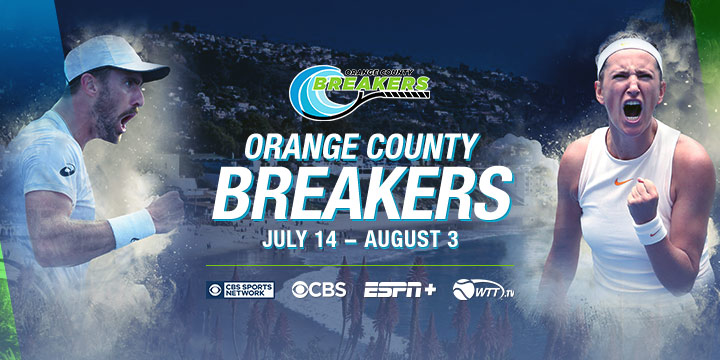 A diverse group of players will compete this season for the Orange Country Breakers, who are looking to add another World TeamTennis trophy to go along with the 2017’s championship hardware. This year’s team features homegrown talent Steve Johnson participating in three WTT matches while Victoria Azarenka and Genie Bouchard will each play a single match.

Johnson, the 2013 WTT Male Rookie of the Year, is in his fourth season with his local team, and the former USC superstar and two-time NCAA singles champion is coming off a run to the third round of Wimbledon highlighted by his first victory this season over an opponent ranked in the top-30 of the ATP rankings.

Azarenka, a two-time Australian Open champion, also just reached the third round of Wimbledon, but fell to eventual champion Simona Halep. She will make her debut for the squad July 20th against the San Diego Aviators in a bout also featuring rising star Taylor Fritz.

Bouchard will look to kickstart a strong hardcourt season in Newport Beach on July 23rd. A native of Montreal, Canada, she will join the team to take on the Philadelphia Freedoms before beginning her North American swing.

Joining the trio are James Ward and Luke Bambridge, both will be making their league debuts this season.

A Davis Cup hero for Great Britain, Ward sports an ATP singles career-high ranking of No. 89 and owns four singles titles on the ATP Challenger Tour, as well as two doubles titles. Fellow Englishman Bambridge enjoyed a breakout 2018 season, winning two ATP doubles titles and entered the top-100 of the rankings for the first time.

And last but certainly not least, 2017 WTT Female MVP Andreja Klepac will join the Breakers for the third consecutive season and 2016 WTT Female MVP Nicole Gibbs will return to Newport Beach for the fifth season in a row.

Klepac is as solid in doubles as any player on tour, finishing in the top-30 of the WTA rankings in each of the last four seasons. She has won six WTA doubles titles and has also reached the quarterfinals at three of the four majors in women’s doubles, as well as one semifinal appearance in mixed doubles.

The other two-time NCAA singles champion on the roster, Gibbs just had surgery to remove a cancerous tumor in her mouth less than two months ago and has already resumed tournament play. The former Stanford standout has WTA career-high rankings of No. 68 in singles and No. 107 in doubles.

She believes the season comes at a perfect time for her.

“The World TeamTennis season could not come at a better time. Can you imagine any better way to get back into it than playing 14 shortened format matches in 18 days,” Gibbs said in a recent Sports Illustrated podcast. “It’s literally as perfect as it could get.”

After enduring an injury-plagued 2018 season in which every few days a new player was joining the squad, Orange County will hope they remain healthy because if they are at full strength, this squad will be in contention to win their second King Trophy in three seasons.

Coach Rick Leach is at the helm of the Breakers for the fourth season, and the 2015 WTT Coach of the Year is excited about the talented group of players General Manager Allen Hardison has put together for him.

“I think we have one of the deepest teams this year. Last year was tough, we got the injury bug and never really got into a flow during the season. This team is ready to go, I think we have a great shot to make the playoffs if we can weather this four-match road trip to start the season.”

Earlier in 2019, team owner Eric Davidson acquired an ownership stake in the league, while also being named World TeamTennis’ new Chairman of the Board.

The Breakers will begin the season with a big road test, heading to the East Coast for matches against the Orlando Storm, Philadelphia Freedoms, Washington Kastles, and New York Empire, before returning to SoCal for a four-match homestand. In the final week of the season, the team will be on the road against the Vegas Rollers and San Diego Aviators, before contesting three of the final four matches at home.