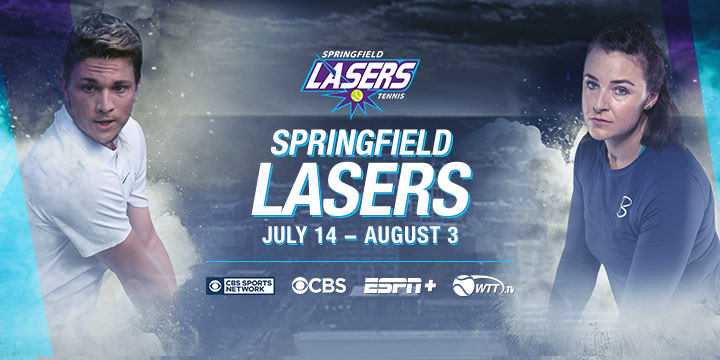 Paul Nahon knew just who to call when, at the last minute, he needed one more men’s player for the World TeamTennis season.

The Springfield Lasers general manager picked up the phone and called former Lasers doubles specialist Jean-Julien Rojer. He’ll replace Joe Salisbury, who has withdrawn from the team after suffering an injury at Wimbledon.

“It happened within 30 minutes or so,” Nahon said. “We reached out to (Rojer) immediately. It took about 6 hours to hammer the details out, so I was on the phone all night getting it done.”

Nahon sounded a little more chipper Thursday than he did when he got the bad news on Salisbury.

“Here we go again,” was his response Wednesday.

The reigning WTT champions have definitely been here before. They lost a pair of players to injury just before the start of the 2014 campaign.

That worked out alright in the end, though. Substitute players like Olga Govortsova and Abi Spears were solid and Springfield won the Western Conference championship. And wouldn’t you know it, Govortsova and Spears will both play for Springfield in 2019.

And those players that got injured before the 2014 season? They were none other than Rojer and Alisa Kleybanova. Maybe Nahon and coach JL de Jager are on the verge of whipping up a little more magic as the Lasers open their title defense against the Philadelphia Freedoms July 14 at 7 p.m. at Cooper Tennis Complex.

Rojer also played for Springfield in 2017, so the Lasers know what they’re getting.

“His on-court demeanor is great,” Nahon said. “His hands are great. He’s got fast hands at the net and just his overall movement is phenomenal.”

Spears will again play a big role this summer after helping power the Lasers to their first WTT title in 2018. The doubles specialist is 30th in the latest WTA rankings. She also helps pack the stands at Cooper thanks to family members who live in the Ozarks.

“She’s always asking me for more tickets. This year I’m just giving (Spears) her own section,” Nahon said. “She’s got a huge fan club. A lot of friends and family come out to see her. And with her teamwork and uplifting spirit, she’s a real asset for the team.”

Miomir Kecmanovic is also back from 2018. He earned WTT Finals MVP honors after beating Philadelphia’s Kevin King in the final set of the championship match. His career has taken off since that win. Kecmanovic is now a career-high No. 67 in singles.

Springfield’s franchise player will appear in the first four matches of the season — all at home — before returning to the tour.

“Last year he was ranked No. 180,” Nahon said. “He had success at Wimbledon and the week before he got to the finals of an ATP 250. It was very important to get him back this season. And he understands the benefit of World TeamTennis and the impact it can have on your career. WTT definitely conditions them for the tour.”

Kecmanovic, just 19 years old, is one of two young stars for the Lasers. Anna Blinkova, age 20, makes her WTT debut with the Lasers this summer. The current WTA rankings have her 84th in singles and 75th in doubles.

Blinkova has the makings of a rising star. The Russian earned three ITF World Tour titles in May, all in doubles.

“She just lost in the third round of doubles at Wimbledon and almost qualified in singles,” Nahon said. “She was next in line. If only one woman would’ve dropped out, she would’ve gotten what’s called a Lucky Loser, but unfortunately they all showed up.”

Blinkova, like Kecmanovic, will make an early return to the tour. Her replacement for the final week of the season will be Govortsova. A fan favorite in 2014, the former world No. 35 has been back on the tour for about a year after giving birth to her first child in February 2018.

“She’s been around before and is an experienced tour veteran,” Nahon said. “She’s over in Europe playing right now and starting to see some success. She’s had some top 100 wins in 2019.”

The Lasers plan to have the services of Enrique Lopez Perez all season. The Spaniard is a tour veteran who reached the quarterfinals in both singles and doubles in his home country at the Murcia Open Challenger in April.

“He’s a good, well-rounded player,” Nahon said. “He’s climbing in the ranks again and, with his experience, he’ll be a good backbone for the team.”