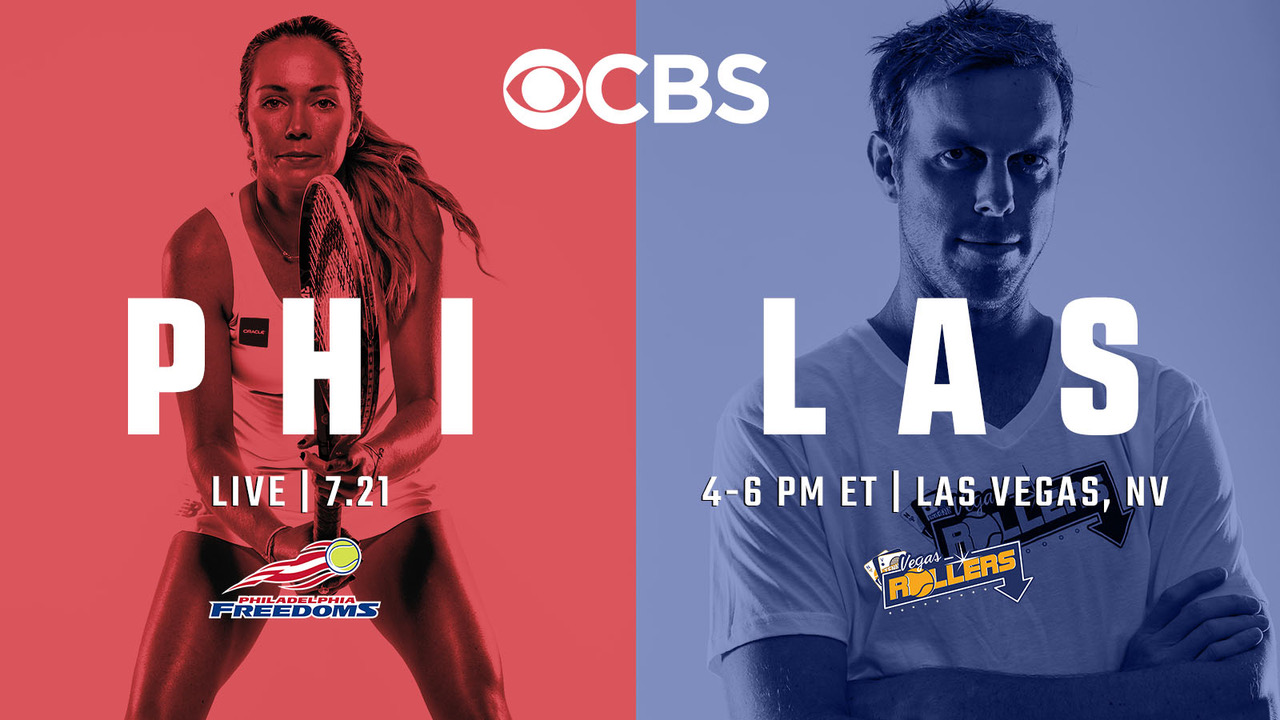 World-class ATP and WTA talent on display in a team format as Philadelphia, buoyed by Grigor Dimitrov and Danielle Collins, faces an expansion Vegas team led by the Bryan Brothers, Sam Querrey and Monica Puig

World TeamTennis combines the bright lights of glitzy Las Vegas with its largest collection of star power for a 2019 early-season match-up between the Philadelphia Freedoms, featuring Franchise players Grigor Dimitrov and Danielle Collins, and the Vegas Rollers, bolstered by Bob and Mike Bryan, Sam Querrey and Monica Puig, live on CBS on July 21 from 4-6 p.m. ET/1-3 p.m. PT at the Orleans Arena in Las Vegas, Nev. Additionally, CBS Sports Network will televise 15 matches live during the WTT season, July 14-Aug. 3.

“World TeamTennis is proud to showcase six of the league‘s Franchise players during the broadcast debut with our new television partner, CBS Sports,“ said WTT CEO Carlos Silva. “With top players, two new teams and our new broadcast partner, WTT is strong and growing, and proud to provide what should be a great Sunday of tennis on CBS from Las Vegas.“

The visiting Freedoms will showcase Dimitrov, an eight-time ATP Tour winner and seven-time finalist, and Collins, who is an up-and-coming American on the WTA Tour and reached the semifinals in January‘s Australian Open, the year‘s first Grand Slam tournament.

The Rollers are one of two expansion franchises to the eight-team WTT in 2019, along with the Orlando Storm. Suiting up for Vegas are the Bryan brothers, who have teamed to win 114 ATP doubles titles, 16 Grand Slam doubles championships (six Australian Opens, five U.S. Opens, three at Wimbledon and two French Opens) and the 2012 Olympic Gold Medal. At 41, Mike Bryan remains the world‘s top-ranked doubles player. He and his twin brother, Bob, have won the most professional tennis matches, tournaments and Grand Slams in tennis history, and held the World No. 1 ranking together for longer than any doubles duo. They held the year-end No. 1 ranking a record 10 times.

Teaming with the Bryans for Vegas are 10-time ATP singles champion Sam Querrey, a 2017 Wimbledon singles semifinalist and Las Vegas resident, and Puerto Rican Monica Puig, who won the 2016 Gold Medal at the Rio Summer Olympics.

The day-by-day match schedule for WTT‘s 44th season, with all Franchise player appearances, can be found HERE. WTT previously announced its 59-match regular season ÔÇô seven home matches and seven away matches for each team ÔÇô for 2019.

The 2019 WTT playoffs, to be hosted by Orleans Arena (at The Orleans Hotel and Casino) in Las Vegas, begin with the league‘s semifinals on Aug. 2 and conclude with the WTT Finals on Aug. 3.