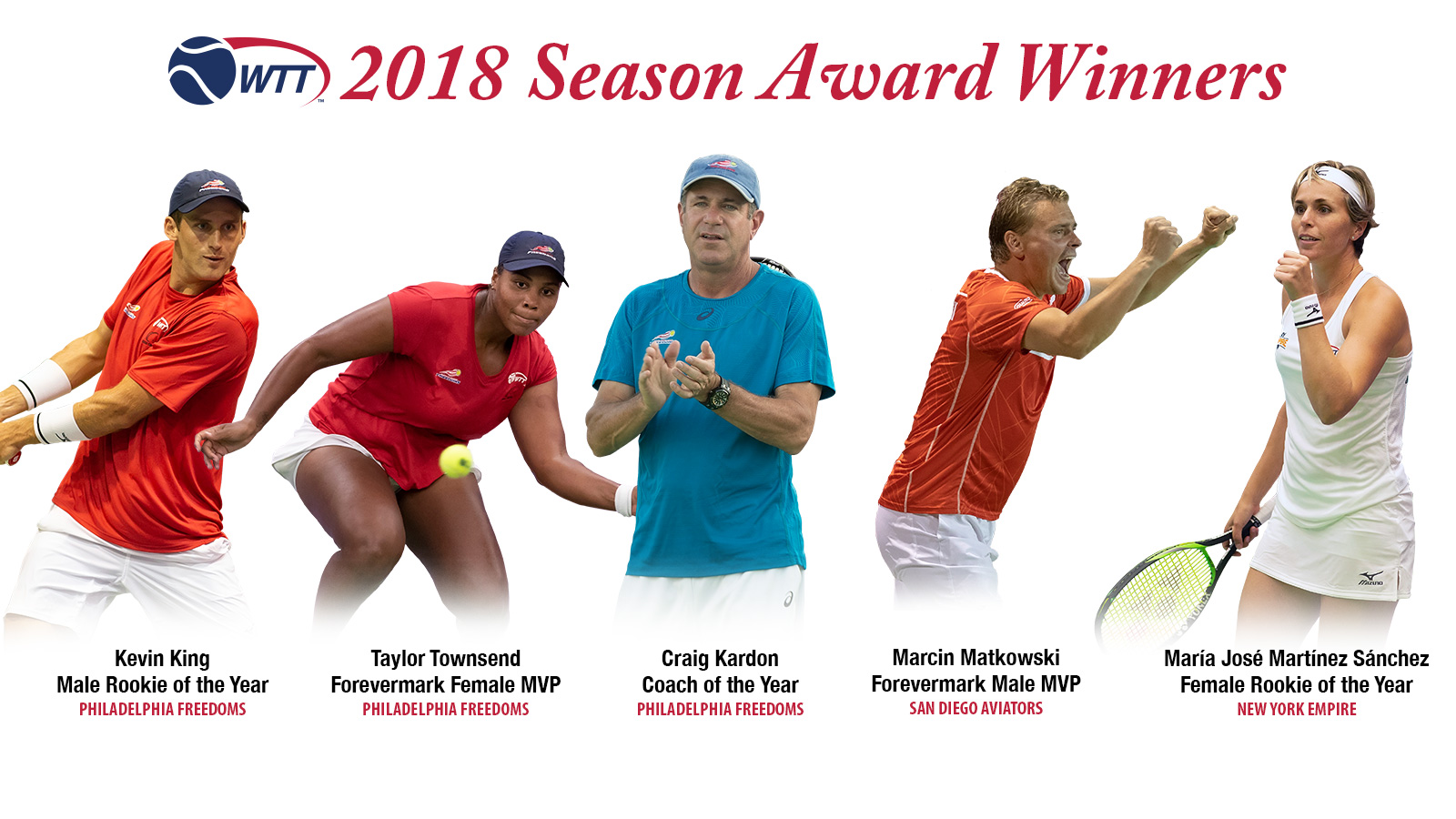 Taylor Townsend of the Philadelphia Freedoms and Marcin Matkowski of the San Diego Aviators were named recipients of the World TeamTennis MVP awards presented by Forevermark, based on their performance during the 2018 regular season of World TeamTennis presented by GEICO. Townsend and Matkowski will each receive a $7,500 bonus and a one carat diamond from Forevermark, a diamond brand from The De Beers Group of Companies.

Townsend‘s season continues as she leads her Freedoms squad into the WTT Finals presented by GEICO on Sunday, August 5, in Philadelphia.

Earning WTT Rookie of the Year honors are Kevin King of the Philadelphia Freedoms and Maria Jose Martinez Sanchez of the New York Empire who will each receive a $2,500 bonus.

Craig Kardon, who led the Philadelphia Freedoms to a league-leading 12-2 regular season record, was named WTT Coach of the Year.

The top-seeded Philadelphia Freedoms (12-2) will face off against the Springfield Lasers (8-6) in the WTT Finals presented by GEICO on Sunday, August 5, at the Daskalakis Athletic Center on the campus of Drexel University in Philadelphia. The match begins at 2:00pm ET on ESPN3, with ESPN2 joining the live action at 3:00pm ET.

2018 WTT FEMALE MVP: No player was more dominant this summer than Taylor Townsend of the Philadelphia Freedoms. Townsend was undefeated in women‘s singles, going 12-0 in set wins throughout the three-week season and winning 60 of 82 games (.732). Townsend was also part of the league-leading women‘s doubles team (.589), a lineup that also included Freedoms teammates Raquel Atawo, Gabriela Dabrowski and Sloane Stephens throughout the season. It was the first post-season honor for Townsend who has played four seasons with the Freedoms. “I‘m really excited and happy to be named Female MVP,“ said Townsend. “I‘ve never won this award before so it‘s really special to do it with this great team. But we have one more match to win and we are totally focused on bringing another championship title home to Philadelphia on Sunday.“

2018 WTT MALE MVP: Marcin Matkowski‘s first World TeamTennis season was a wild ride, with the first-year player keeping his San Diego Aviators team in the playoff race until the final night of the regular season. Matkowski teamed with Marcus Willis to finish as the third-ranked men‘s doubles team (.517) and paired with Anna-Lena Groenefeld to form the top mixed doubles team in the league (.535). “We came up short at the end but it was a great season,“ said Matkowski. “Thanks to my teammates who helped me win MVP, although I would swap the award for a place in the Finals.“

2018 WTT FEMALE ROOKIE OF THE YEAR: The play of Maria Jose Martinez Sanchez was a highlight for the New York Empire as the Spaniard was named WTT Female Rookie of the Year. She finished with a .504 winning percentage in women‘s doubles, and teamed with Neal Skupski to finish fourth in mixed doubles with a .518 winning percentage. “It is a pleasure to receive this award in my first season of World TeamTennis,“ said Martinez Sanchez. “I had really nice support from my teammates every day and share this honor with them.“

2018 WTT MALE ROOKIE OF THE YEAR: Kevin King of the Philadelphia Freedoms was named WTT Male Rookie of the Year after finishing the season ranked second in men‘s singles (.528 winning percentage). King also partnered with the 2016 Male Rookie of the Year Fabrice Martin to finish second in men‘s doubles (.520). “I‘m very happy to win this award,“ said King. “I had an amazing team around me all season. Our team chemistry really made the difference. It‘s been a great experience to play for Craig (Kardon) and (team owner) Billie Jean King.“

2018 WTT COACH OF THE YEAR: Craig Kardon guided the Freedoms to a league-best 12-2 record to earn the 2018 WTT Coach of the Year honors. It‘s the second time for Kardon who also received the award in 1992. “I‘m honored to be named Coach of the Year, especially with this Freedoms team,“ said Kardon. “This is a great team to accomplish this with, and we have more work to do this weekend in the Finals.“ Kardon previously coached the Freedoms to their last WTT title in 2006, one of his five WTT championship titles.

World TeamTennis (WTT) showcases the best in professional tennis with the innovative team format co-founded by Billie Jean King in the 1970s. Recognized as the leader in professional team tennis competition, WTT features many of the world’s best players competing annually for the King Trophy, the league’s championship trophy named after King. In July 2015, WTT became the fifth major professional team sports league in the U.S. to reach the 40th season milestone. In 2017, team owners Mark Ein and Fred Luddy acquired majority ownership of the organization. The 43rd season of WTT presented by GEICO begins July 15 and concludes with the WTT Finals on August 5. On the recreational side of the sport, WTT Community Tennis operates team leagues and events, providing grassroots programming throughout the year. For more information, visit www.WTT.com.