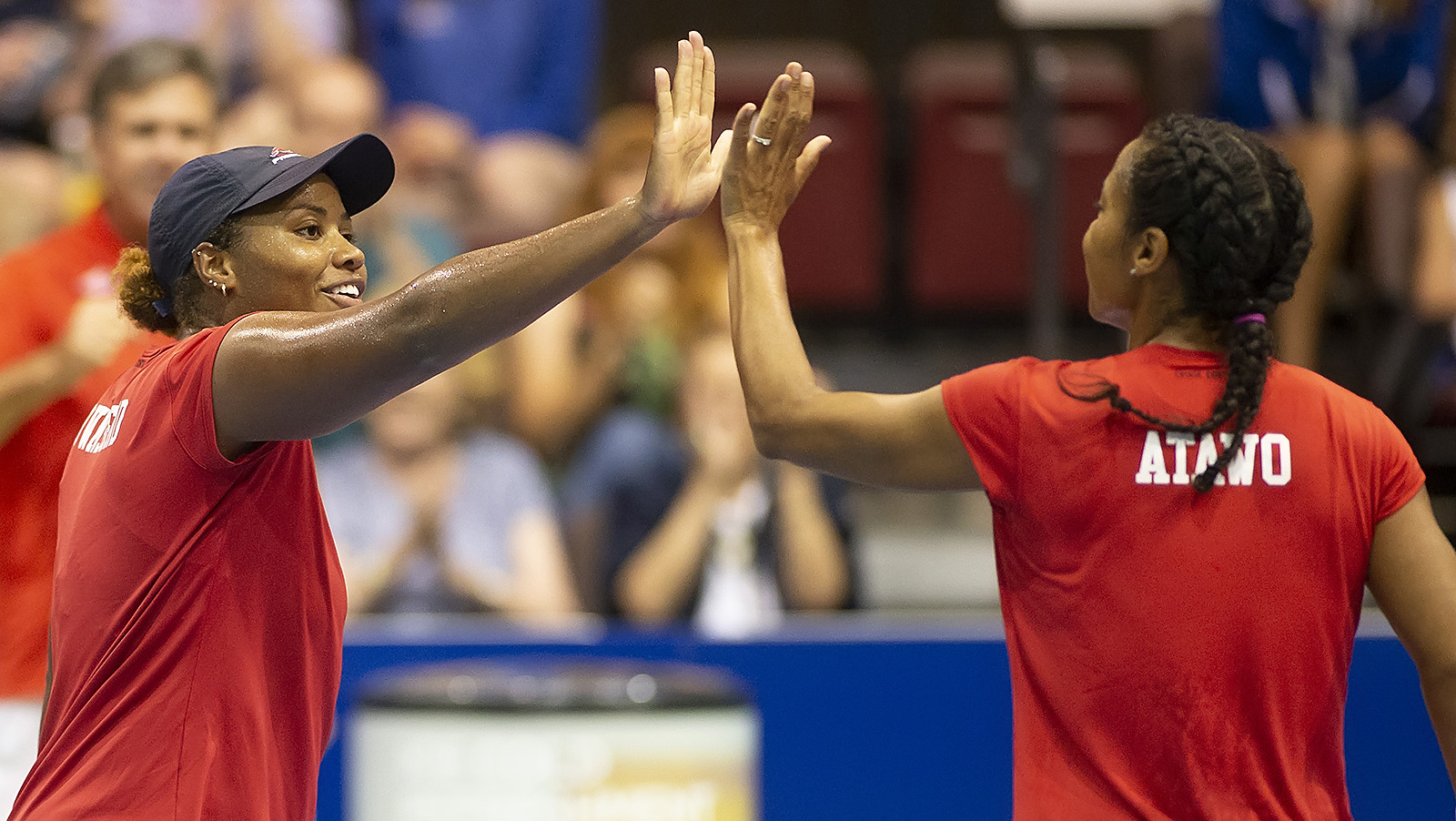 Doubles made the difference for the Philadelphia Freedoms in a 20-18 win at the Springfield Lasers on Tuesday, July 31. That‘s no surprise. Teamwork has been key for the Freedoms as they‘ve dominated World Team Tennis this summer.

Raquel Atawo, Philadelphia‘s women‘s doubles specialist, said energy and team spirit has fueled the team‘s 11-1 start. The Freedoms are 6-0 on the road this season. They’re 2-0 at Springfield’s Mediacom Stadium at Cooper Tennis Complex.

“We get along really well, we‘re always laughing and having a good time,“ she said. “Nobody‘s really a diva or high maintenance, so there‘s good rapport between us.“

That rapport helped Atawo and Fabrice Martin to a 5-3 win over Daniel Nestor and Abigail Spears in mixed doubles. Atawo served the deciding point to break a 3-all tie in that set, then she and Martin broke Spears‘ serve to wrap up the win.

Taylor Townsend improved to 10-0 in women‘s singles play this season with a 5-1 rout of Springfield‘s Vania King. Townsend broke King‘s serve three times in the set.

Townsend’s fourth 5-1 victory this season gave the Freedoms a 15-14 lead heading in the women‘s doubles, the final set of the match. Atawo and Townsend fell behind 4-3 in the set before Atawo held serve and the Freedoms won the nine-point tiebreaker. Game, set, match.

Atawo and Townsend are now 2-1 on the season against King and Spears.

“You learn as you go,“ Atawo said. “There were some strategic or tactical things we noticed, so we tried to apply them today. Luckily it worked out.“

“We lost all the important points,“ Springfield coach JL de Jager said. “(Philadelphia) served well. They had a couple of clean aces and maybe six unreturnables on break points. They played well and they‘re a good team. But we had enough chances to win tonight.“

Springfield and Washington are now 6-6, one game behind San Diego (7-5) for the second and final spot in the WTT Finals. Everyone has two matches left in the regular season.

“If we win the next two matches, we still have a shot,“ de Jager said. “You never know.“

The Lasers‘ last two matches will be played away from Mediacom Stadium, so it was Spears‘ last chance to play in front of family members who live in the Springfield area.

“It‘s been really good to see my aunts and my cousins. And my dad and stepmom drove in from Colorado. They were here the last three nights,“ Spears said. “It‘s very rare to have family in the stands on the tour. It‘s really nice to see friendly faces and see them enjoying it.“

Philadelphia wraps up the regular season with a home-and-home series against last-place New York (1-11). The Freedoms host the WTT Finals presented by GEICO on Sunday, Aug. 5.

“We‘re really excited about making the (WTT) Finals and being in the No. 1 position,“ Atawo said. “We want to maintain it. In the back of our mind we know every game is really important, so we‘re fighting for every game.“

TURNING POINT: King broke Townsend‘s serve to pull within 2-1 in women‘s singles. But Townsend broke right back to reclaim control of the set. Her 5-1 win gave the Freedoms the overall lead, 15-14, and they never trailed again.

NEXT ON: Springfield heads west for a must-win match against the Orange County Breakers. The Lasers are 0-2 against Orange County this season. Follow results on WTT.com/scores or www.springfieldlasers.com. Watch live streaming of all WTT matches on WTT.tv presented by GEICO.