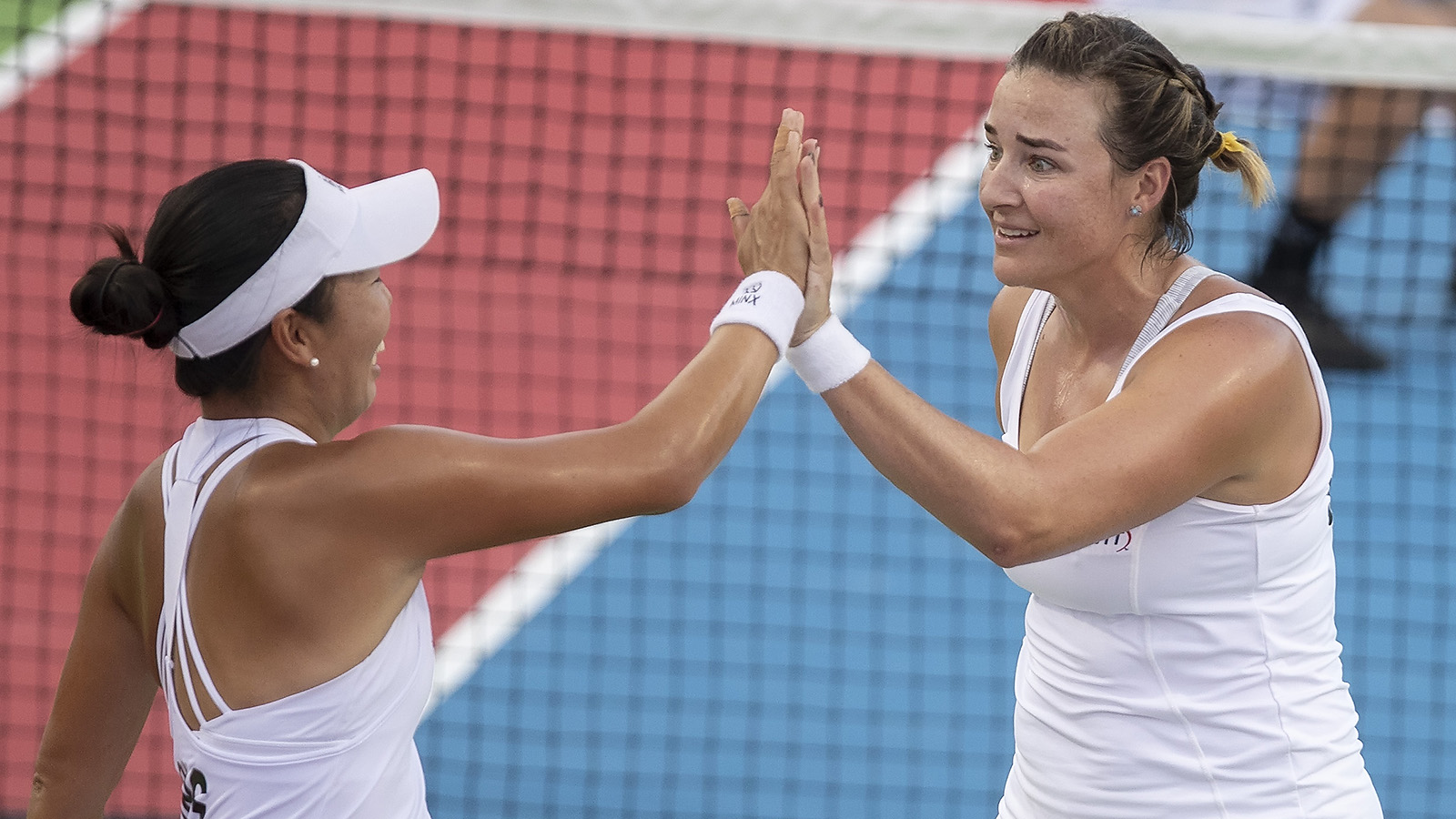 Springfield‘s Vania King and Abigail Spears have come to epitomize the expression “ice water in their veins.“

For the fourth match in a row, the Lasers‘ women closed out a victory. This time it was a 5-2 win in women‘s doubles to push Springfield past Washington 22-21 on Monday, July 30, at Cooper Tennis Complex.

“This is why we play tennis. We love it,“ Spears said of those pressure situations.

It‘s a crucial win for the Lasers, who are in the hunt for the second and final spot in the WTT Finals. Springfield‘s win and San Diego‘s loss to New York leaves those two teams tied for second place with three matches to play. The Lasers visit San Diego on the final night of the regular season for what could be a winner-take-all match.

“They were nice and clutch. It‘s been working for us,“ Lasers coach JL de Jager said. “I‘m glad we won this one, because every match is crucial for us from now on.“

Springfield trailed the overall score 19-17 heading into the final set and needed a big victory in women‘s doubles. King and Spears were up to the task. The pair of Lasers‘ veterans struck first by breaking Madison Brengle‘s serve to go in front 3-1.

Both teams held serve the rest of the night to give the Lasers the 5-2 score they needed to win the match in regular play.

“(Spears) played really well. I think it was one of her best nights returning,“ de Jager said. “It‘s tough when you know you have to win 5-2. That‘s in the back of your mind. But they just kept playing one point at a time. They kept their composure, the bench was nice and positive about it and we just kept on believing.“

King and Spears are now 7-4 on the season. They‘ve won four of their last five sets, including a 5-1 win over Washington July 26. The two of them gelled quickly as a team this season despite not having played together in the past.

“We‘ve known each other for a long time. We‘ve always been friends, so it‘s easy,“ Spears said. “I want to come to the net, she‘s solid. We‘re just trying to do those things we‘re good at.“

King also feels their rapport off the court has made a big difference on it.

“We get along really well and we have fun every time we go out there,“ she said. “We have the same mindset, which is play your best, play every point and have fun. If we‘ve left it all out there, that‘s all we can do.“

King won four straight games in the final set July 29 to give Springfield the win over New York. But de Jager, playing a hunch, scheduled women‘s doubles for the last set against Washington.

“I switched the women‘s singles and doubles because I felt if the ladies were playing well, they could win 5-1 or 5-2, and Vania was going to have a tough match,“ he said.

He was right. King dropped a 5-4 decision to Brengle in women‘s singles.

“JL has clearly done a great job putting the lineup together,“ King said. “He‘s really looking at the matchups and being strategic about that.“

De Jager, in his 19th WTT season and 12th as a coach (all with Springfield), showed off his tactical acumen in mixed doubles, the second set of the night. With the Lasers trailing set 4-2, he substituted Miomir Kecmanovi─ç for Daniel Nestor.

The move paid off. Kecmanovi─ç and Spears broke Nicole Melichar‘s serve and pushed the set to a tiebreaker. They lost the set there, 5-4, but winning those two games helped keep the match close.

“I just thought that Miomir was returning so well and we need (Nestor) for his serve,“ de Jager said. “(Nestor) was done serving, so we couldn‘t lose anything by putting (Kecmanovi─ç) in. It worked out, so I‘m glad I made that move.“

Nestor, a true professional, took it all in stride and de Jager admits it was a tough move to make.

“You want everyone to feel they add value to the team,“ de Jager said. “But Danny knew. He didn‘t even look when I said Misha was going to be returning. He just said, ÔÇÿGreat move.‘ It‘s about the team. Whatever‘s best for the team.“

Kecmanovi─ç pushed his singles winning streak to four in a row with a 5-4 win over Tennys Sandgren. The players traded serves throughout the match. Kecmanovi─ç stole a point off Sandgren‘s serve to win the tiebreaker 5-1 and the set 5-4.

That was the first of four tiebreakers on the night. Washington won three of them. That included men‘s doubles, where ÔÇö just like in men‘s singles ÔÇö both sides held serve until the very end. Robert Lindstedt served the final two points as he and Sandgren defeated Kecmanovi─ç and Nestor 5-4.

TURNING POINT: Springfield led women‘s doubles 2-1, but trailed Washington 20-19 overall, when Brengle stepped up to serve for Washington. The Lasers broke her serve by winning a 3-all point and never trailed again.

NEXT ON: Springfield wraps up its home schedule Tuesday, July 31, with a visit from league-leading Philadelphia. The match starts at 7 p.m. at Cooper Tennis Complex. Follow results on www.WTT.com/scores or www.springfieldlasers.com. The match can also be viewed live at www.WTT.tv.