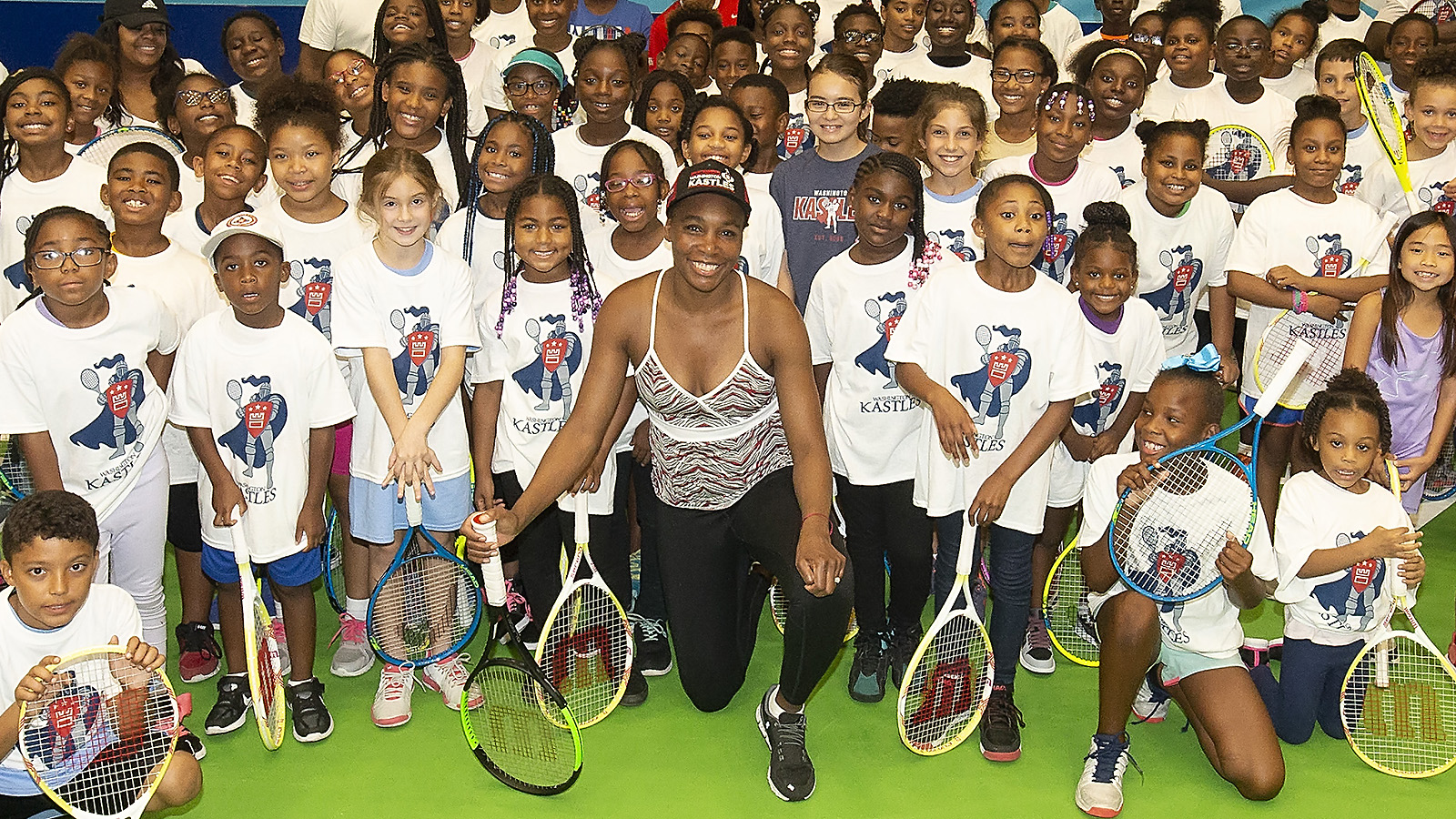 The chant was steady and ÔÇô somewhat surprisingly ÔÇô loud. The kids were shouting in groups of 10 or 12 and what they lacked in numbers they made up for in gusto. Pure kiddie power.

It was a Wednesday afternoon inside Kastles Stadium in D.C. and ÔÇô you guessed it! ÔÇô Venus Williams was making her first of two appearances for the Washington Kastles and the 2018 World TeamTennis presented by GEICO season.

Venus has played WTT for 13 seasons and for the Kastles in seven of those. As she strode onto the court, face tucked under a well-worn Kastles cap, her face slowed into that familiar smile. The chants had welcomed her out onto court. And they continued even louder as she greeted the groups one by one.

A day at a WTT match is more than a multi-colored court and a unique scoring system. Teams throughout the league host thousands of kids for clinics throughout the season. Jack Sock led one in Springfield, Mo., earlier this summer, just as Frances Tiafoe had done in D.C. and Venus did hers on Wednesday afternoon.

The kids look at all of the players just the same: Like heroes with capes on. Who cares if they‘re wearing capes or not. (And ÔÇô just to be clear ÔÇô usually they aren‘t.) They‘re heroes to these kids.

After spending time on mini NetGeneration tennis courts, the kids ÔÇô from the local Southeast Tennis and Learning Center ÔÇô all gathered on one end of the court. It was meant to be a quick photo opportunity with Venus.

Then Venus took over.

“How old is everybody?“

“Where is one place in the world you‘d like to travel?“

“I just played in France. Do you know what language they speak there?“

“Who wants to be a tennis player when you grow up?“

“Who wants to go to college when you grow up?“

It may have only been five or ten minutes, but to the kids gathered, it will be a moment they will remember forever. But after it was over and the originally planned pictures were taken, Venus had to go. She had a match to get ready for.

WTT nights are special. They‘re different from a normal evening session at a tennis event on tour. Fans stream in with a buzz in the air, collecting their “Refuse to Lose“ Kastles placards as kids ask for popcorn or a bag of candy. Music blares, cheerleaders dance, a man in stilts belts out cheers into a microphone.

On this night it‘s intense. A free-wheeling Marcus Willis puts the San Diego Aviators up 5-3 with a win over Tennys Sandgren, and eventually the Aviators lead the Kastles 18-15 heading into the final set: Women‘s singles.

Suddenly Venus was taking the court for the last set of the night needing a 5-2 winÔÇª and that was only to tie.

But that‘s when Venus Williams comes alive: When the pressure is on. After a 2-2 start against big-hitting Naomi Broady, she wins three games in a row to take the set 5-2, sending Kastles Stadium into a roar. With the overall match score tied at 20-20, sudden-death Supertiebreaker will decide it.

Broady and her massive serve go up 6-4 on the veteran Venus. What was a deafening crowd a few minutes ago is now a rather silent one. Venus starts to chip away, however, winning the first match point and then the second. In WTT rules, at 6-all in the Supertiebreaker, it‘s last point wins.

It‘s a last-second three-pointer. Or a 47-yard field goal late in the fourth. Or a ninth-inning home run when the game is tied.

Except this is tennis. That never happens.

That‘s part of the magic of WTT, and on this night it feels like the cosmic forces have come together to produce a script that read as Hollywood as they come. As Venus Williams strikes a winner after a long exchange with Broady, the entire place erupts. The building shakes, actually.

Venus jumps up and down, much like the celebration we‘ve seen after a Grand Slam triumph. The Kastles bench clears. The music starts up again and the place has a party atmosphere.

Sometimes it all works out.

Earlier in the day, after the kids‘ clinic and before the match, Williams had taken questions from members of the media. It was brought up that the Tokyo Olympics were two years away and would ÔÇô at 40 years old ÔÇô Venus be there? Still playing?

“That‘s the plan,“ she said with a wry smile. And what drives said plan? “That winning feeling,“ she added. “Winning never gets old. In any format, in any place. It always feels good.“

You can imagine that perspective was re-affirmed on Wednesday night. Venus got to feel that feeling again. So did those kids watching. So did the 3,000 fans cheering her along.