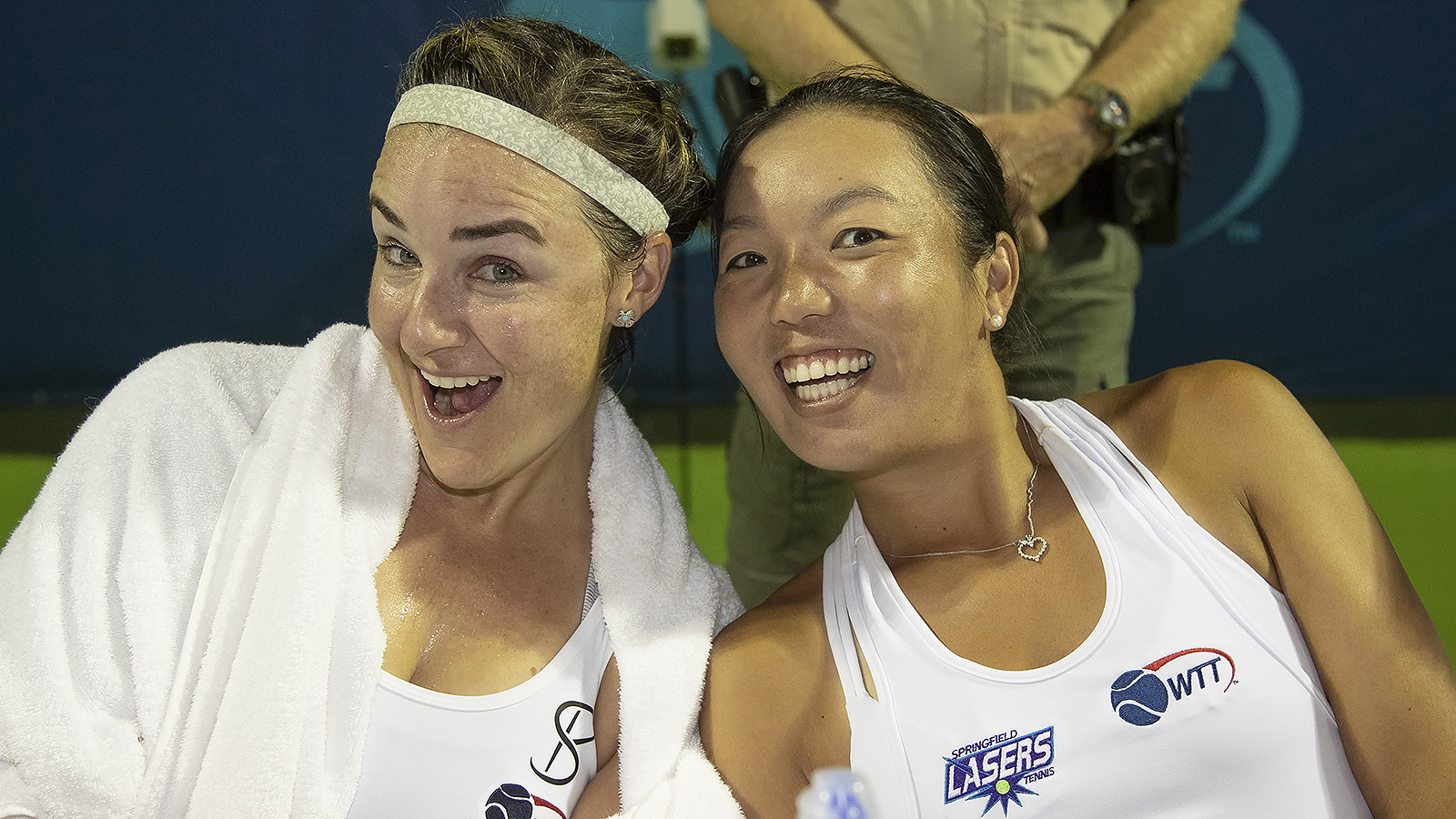 Maybe it wasn‘t as big of a comeback in 2018, but it thrilled the crowd at Cooper Tennis Complex‘s Mediacom Stadium all the same. And it left King smiling.

“I was trying not to think about the score,“ she said. “JL just told me go out there, have fun and play each point. If I won or lost a point, I just let it go and tried to execute what I wanted to do out there. That‘s what I focused on and I‘m happy that I was able to do that today.“

She did exactly that. King served her way to victory in the ninth game, then broke a 4-all tie with three straight points ÔÇö all off Maria‘s serve ÔÇö to win the match and send the Lasers‘ fans home happy.

There‘s a good reason de Jager, in his 12th season with Springfield, told King to ignore the scoreboard.

“If you start looking at the score, you put pressure on yourself. We know Vania has the right type of game to play against (Maria) and beat her,“ de Jager said. “It‘s good for the team because they keep fighting. Every match we learn stuff. And this was important for us because it‘s keeping us alive for the playoffs.“

Springfield is now 5-5 on the season. The Lasers sit one game back of San Diego in the race for the second and final spot in the World TeamTennis Finals with four matches to play. New York falls to 0-10.

The victory over Maria runs King‘s women‘s singles winning streak to three singles matches in a row. That includes a 5-3 win over Venus Williams in Washington July 26. She also defeated Maria 5-2 on July 25.

King is due some good fortune. She suffered an ankle injury in the 2017 BNP Paribas tournament, in Indian Wells, Calif.. That injury required surgery and a long recovery. King also took a tumble in the Lasers‘ home opening match July 18. She was dinged up and played women‘s doubles only over the next few matches.

“I‘m not at 100 percent. I actually don‘t know if my ankle will ever be at 100 percent,“ King said. “I have a lot of stiffness in my ankle. In the past my joints were hypermobile, now they‘re extremely stiff. The whole process is me building up more mobility and play with what is basically a different ankle. It functions differently now.“

Miomir Kecmanovic got the Lasers off on the right foot, defeating Dennis Novikov 5-2 in men‘s singles. Misha won four straight points to break Novikov‘s serve and take a 2-1 lead in that set. He then served three aces to win the next game and build an insurmountable 4-1 edge.

The World TeamTennis rookie has won three sets in a row and six of this last seven. This comes after an 0-2 start to the season. His last three winning scores: 5-3, 5-2, 5-2.

“I think he‘s being more positive,“ de Jager said. “He fits in here even though he‘s only 18 years old. He‘s a good player and he has a bright future. And playing doubles is very good for him. He needs to work on his transition game and he‘s playing against some good doubles players. We‘re happy with him.“

The visitors pushed that lead to 17-14 with a 5-3 win in women‘s doubles. New York broke King‘s serve twice in that set. But King was only getting warmed up.

“TeamTennis has been great because I‘ve been getting a bunch of singles matches in and it‘s been great for my confidence to get match experience and to stay focused. I think little by little I keep improving,“ King said. “So far my ankle has been tolerating it very well. It‘s good news for me.“

TURNING POINT: King went overhead for a smash on deciding point to give herself a 2-1 lead over Maria in women‘s singles. That shifted the momentum the Lasers way. King almost broke Maria‘s serve in the next game, then won the next five to steal the victory for Springfield.

NEXT ON: The Lasers get a night off before hosting the Washington Kastles on Monday, July 30, at 7 p.m. That match has big playoff implications. Both Springfield and Washington are chasing San Diego for the final spot in the WTT Finals. Follow results on www.WTT.com/scores or www.springfieldlasers.com. The match can also be viewed live at www.WTT.tv.