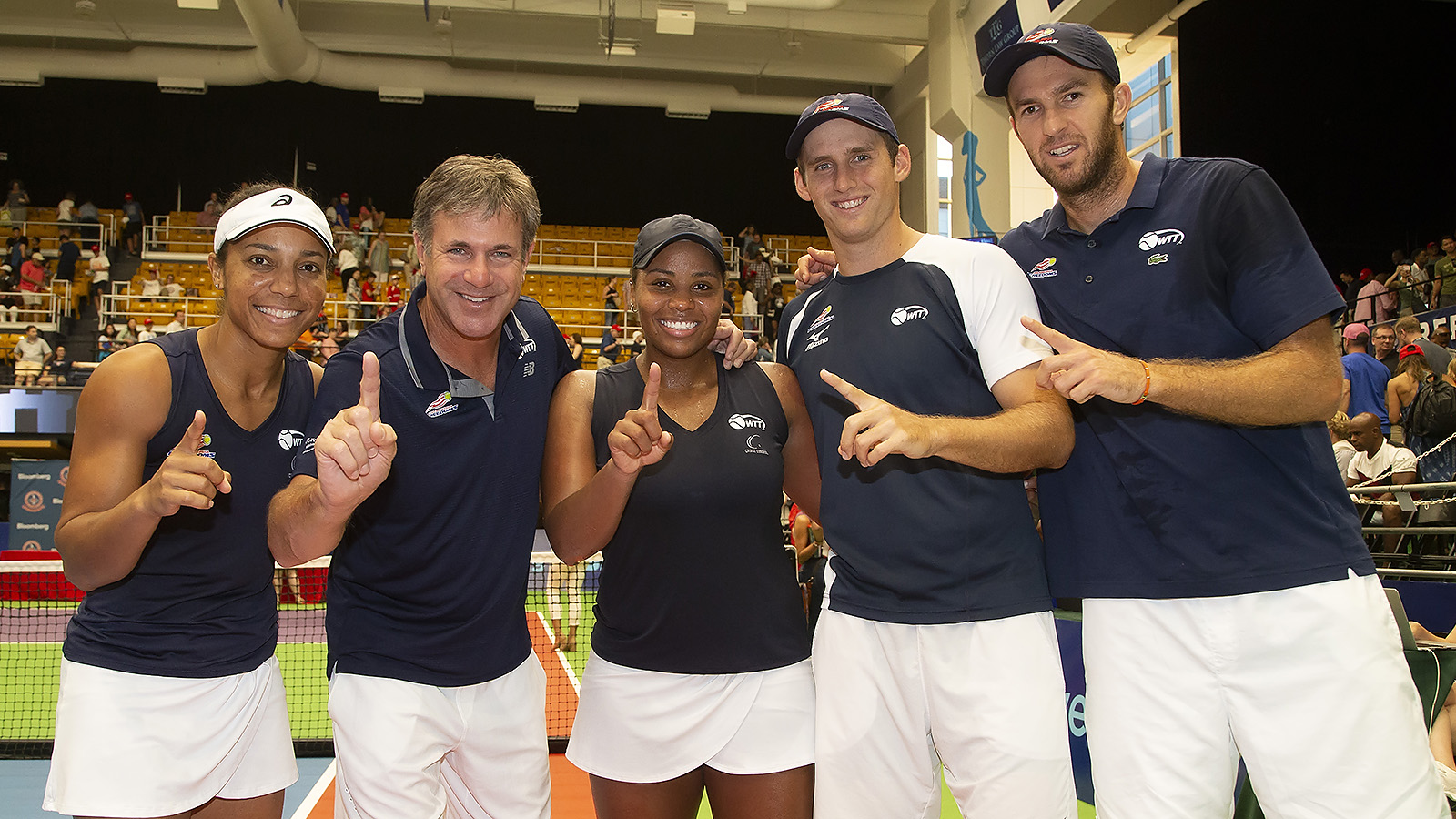 Time and again this World TeamTennis season, teams have faced the Philadelphia Freedoms hoping to secure a key victory en route to a league title. Time and again, Taylor Townsend has had something to say about it.

The 22-year-old lefty topped world no. 17 Naomi Osaka in singles and was a dominant force in three sets to help clinch a 23-19 Extended Play win over the Washington Kastles Saturday evening. The Freedoms‘ seventh straight win moved the team to 10-1 and clinched the league‘s best record, ensuring that they will host the WTT championship match on August 5.

Townsend, who recently obtained a career-best ranking at 62nd in the world, entered and exited Saturday‘s match as the top-performing player in the league, statistically. On Saturday, she was on the court for 86 of the team‘s 128 points won. But she declined to discuss her own individual performance.

“Our team is awesome. This is the most fun I‘ve had as a team,“ said Townsend, playing her fifth WTT season. “We‘ve just been gelling so well and everyone is just doing their part and we‘re having so much fun. It‘s not an individual thing. It‘s individual pieces and it makes a whole puzzle when everyone does their part and it comes together beautifully.“

The Kastles, playing their final home match in Washington, fell to 6-5 but can still qualify for the final. Head Coach Murphy Jensen remained optimistic about the team‘s chances as it prepares for three straight road matches.

“Honestly, I think we‘re in good position to run the table,“ Jensen said. “We‘re playing great tennis. We need to make some little adjustments in winning those big points. I love our team. We are obviously beyond talented, so I see it as an opportunity to go on the road, relax a little bit and take what we‘ve learned the last few matches.“

Saturday‘s action opened with the Kastles‘ Tennys Sandgren against lefty Kevin King in men‘s singles, in a set featuring strong serving from both players. The set remained on serve through seven games and the pair appeared to be heading to a tiebreak, but Sandgren won three straight points off King‘s serve to break and win the set, 5-3. Sandgren did not lose a single point on his serve and converted the only break point of the set.

The next set featured the World TeamTennis debut of Osaka, the world‘s 17th ranked player, up against Townsend. In the second game, Osaka saved one break point with a 121-mph ace, then won the 3-all point after a lengthy rally to even the set at 1-1. Osaka then broke Townsend to give the Kastles a 7-4 overall lead, but Townsend broke back when Osaka double faulted. Up 4-3 in the set, Townsend then earned a set point against Osaka, but pushed a backhand barely wide and Osaka held to force a tiebreak. Townsend then used a strong return game to win five of seven points and take the set, 5-4.

In men‘s doubles, Sandgren teamed with Robert Lindstedt for the Kastles against King and French veteran Fabrice Martin. Philadelphia won four straight points to break serve in the second game and tie the match overall at 10-10. The Freedoms used a strong first serve and steady volleying to maintain the edge and win the set 5-3, sealing things with an overhead smash from Martin. This gave the Freedoms a 13-12 overall lead with the final two sets to play.

In the women‘s doubles event, Townsend teamed with Raquel Atawo against the Kastles‘ Nicole Melichar and Madison Brengle. The teams had some of the best exchanges of the match, and the Kastles gained a double break point in the fifth game after a sensational 20-shot rally that left all four players using a timeout to catch their breath. The Freedoms responded, however, by winning the next two points to stay on serve, then broke for a 4-2 lead. Philadelphia held to win the set, 5-2 and widen the overall edge to 18-14.

The Kastles‘ hopes for a comeback fell on the shoulders of Lindstedt and Melichar against Townsend and Martin. In the fourth game, the Kastles earned three break points off Townsend‘s serve, but the Freedoms saved all three. The set stayed on serve until 4-4. Needing to win a tiebreak to force extra time, the Kastles won the first two points on serve and scored a mini-break on a smash by Lindstedt to go up 3-1. The Kastles secured three set points at 4-2, but the Freedoms saved two to set up match point. The Kastles stayed alive, however, winning the tiebreak on an inside-out forehand winner from Melichar.

Trailing 22-19, the Kastles needed to win three straight games to set up a Supertiebreaker. The Freedoms won four of five points, winning the match on an ace from Martin.

Townsend said she hoped the WTT season will prepare her well as she anticipates the US Open in August and September.

“World TeamTennis can be great for your game,“ she said. “I‘m playing a lot of singles and getting the match play that I need. So I‘m really excited to be playing tournaments, but we gotta finish this first.“

TURNING POINT: The Freedoms‘ Taylor Townsend and Raquel Atawo secured a second break of serve against Madison Brengle and Nicole Melichar. They held to win the set, 5-2, and give the Freedoms a 18-14 lead entering the last set.