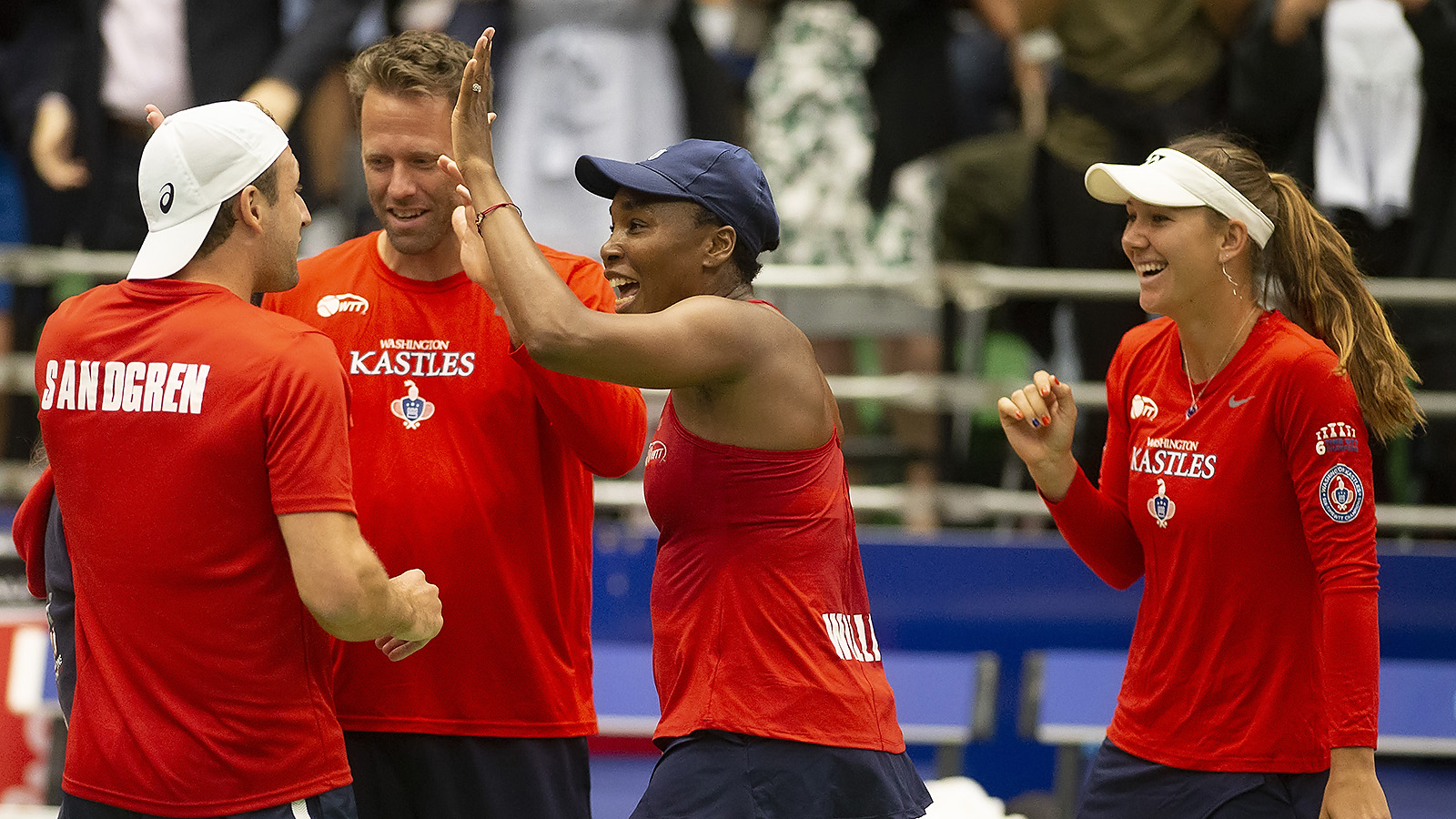 The Washington Kastles left it up to a legend to dig deep and secure a comeback win Wednesday night, and she didn‘t disappoint.

Venus Williams overcame a three-game deficit and three match points to top Naomi Broady in a Supertiebreaker and clinch a 21-20 Kastles win over the San Diego Aviators.

“Oh my gosh! It was so competitive. To play the closing match and be in that position,“ said Williams, who scorched a backhand winner to seal the victory in a winner-take-all point at 6-6 in the Supertiebreaker. “At 20-all you want to win it more for the fans than yourself. You have extra pressure, so coming through it feels really unbelievable.“

With the victory, the Kastles avenged a 25-13 home loss to San Diego last week and moved to 6-2 on the season, one match back of the league-leading Philadelphia Freedoms.

“That was seriously one of the greatest nights of my tennis life,“ said Kastles head coach Murphy Jensen. “It‘s what brings me here. Both teams were awesome and left it all on the table. Venus Williams is Venus Williams for a reason.“

The match opened up with a hard-serving set of men‘s singles, as Marcus Willis went up against Tennys Sandgren, the world‘s 54th ranked player. Despite facing serves of more than 130 miles per hour, Willis earned the first and only break of the set to go up 2-1. The single break was all Willis would need, as he won 16 of 21 points on his serve and finished off the set, 5-3. It was the second time this season that Willis won his men‘s singles match at Kastles Stadium, previously topping world no. 42 Frances Tiafoe.

The next event of mixed doubles featured Nicole Melichar, a 2018 mixed doubles Wimbledon champion, paired with Robert Lindstedt of Sweden, himself a 2014 doubles champion at the Australian Open. Across the court were Poland‘s Marcin Matkowski and Anna-Lena Groenefeld of Germany. The Kastles gained an edge in the third game, coming from three points down to secure the break of serve. They then held serve to tie the match at 6-6 overall, and then at 7-7 Melichar set up a triple break point with a sparkling backhand passing shot down the line. But the Aviators won the next three points to stay in the set. The Kastles then overcame a 2-0 deficit on points to seal the set, 5-3 and tie the overall match at 8-8.

Sandgren and Lindstedt then faced Matkowski and Willis in highly entertaining set of men‘s doubles. The Kastles appeared poised to take control when they led 2-1 with two break points. But the Aviators once again rallied and held, and things remained on serve until a 4-4 tie forced a tiebreaker. The Aviators took a key 4-2 lead in the breaker when Matkowski split the middle with a ferocious backhand winner, and they won the set on a volley winner from Willis. This put San Diego up 13-12 with two setsÔÇöand WilliamsÔÇöleft to play.

Melichar and Williams looked to get the Kastles back into the match against Groenefeld and Naomi Broady, and Williams made her presence known early with a pair of forehand winners off Broady‘s serve. But the Aviators rallied to hold, and San Diego then grabbed momentum off Williams‘ serve, winning the last two points of the game to break and a 2-0 set lead. The Kastles managed a break point at 3-3 in the next game and converted when Groenefeld‘s backhand went long. That put the set back on serve with the Aviators leading 15-13 overall, but the Aviators grabbed a 16-13 lead by winning four of the next five points off Melichar‘s serve.

Two games later, Williams used some clutch serving to save four break points and knot the set at 3-3. Groenefeld gave the Aviators a 4-3 lead with an ace, and Broady ripped a backhand winner to secure a break and a set win for the San Diego.

Could Williams overcome an 18-15 deficit in women‘s singles against Broady? It would not be easy. Williams used some blistering groundstrokes to take the opening game, then broke Broady‘s serve. But Broady refused to allow Williams to knot the match, overcoming two game points to break back and grab a 19-17 overall lead. Three games later, Williams broke Broady with back-to-back forehand winners to cut the Kastles deficit to 20-19.

Needing the final game to win to force a Supertiebreaker, Williams won the first three points, but Broady won the next three, grabbing the last two with laser-guided forehand winners. Williams then took the set, 5-2 and tied the match 20-20 with a 117 mph service winner.

This set up a winner-take-all point at 6-6, and Williams converted a backhand winner to send the capacity home crowd into a frenzy.

“When I was putting together the lineup tonight and deciding to put Venus Williams last, I knew she has experience in the most pressure situations,“ Jensen said. “She‘s able to be relaxed when there‘s a tornado going on.“

TURNING POINT: Venus Williams ripped a backhand winner to overcome a 6-4 deficit in a Supertiebreaker and win the match, 21-20.

NEXT ON: The Kastles will remain in Washington and host the Springfield Lasers on Thursday at 7:00pm Eastern. The Aviators travel to Philadelphia to play the Freedoms at 12 noon Eastern. Follow results on www.WTT.com and www.washingtonkastles.com. All matches are streamed live at www.WTT.tv.