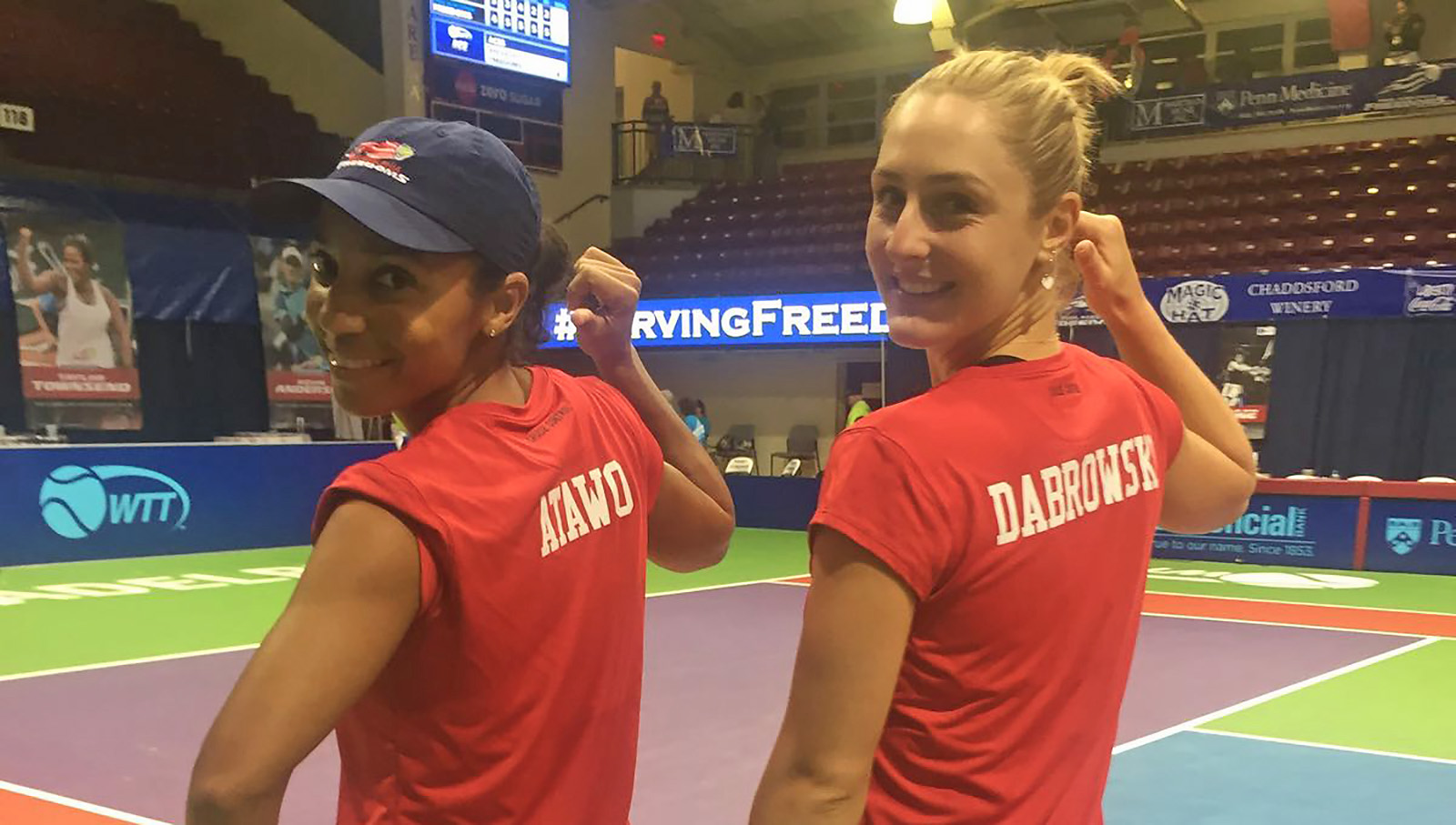 The Philadelphia Freedoms avenged their only loss of the season when they broke open a tense match and handed the Orange County Breakers a 24-16 defeat on Wednesday night at Hagan Arena.

Holding a slim 14-12 lead entering the women‘s doubles set, which was the fourth set played this evening, WTT rookie Gabriela Dabrowski and Raquel Atawo gave the Freedoms a much-needed lift with a 5-2 win over Andreja Klepac and Yanina Wickmayer.

After falling behind 2-1, Atawo served up a love game to even the score at 2-2. The next game looked like it was going to be an easy break for Philadelphia when they jumped out to a 3-1 lead.

Wickmayer and Klepac fought back to win the next two points and force a 3-all game. As they did most of the evening, the Freedoms capitalized on the 3-all point to earn the service break.

“Getting any break at any time is awesome but it only matters if you can follow that up by winning your service game,“ said Dabrowski. “If you can do that then you know you‘ve done well.“

The Freedoms did just that with Dabrowski holding serve before the Freedoms would break again to win the set 5-2 and take a 19-14 lead heading into the fifth and final set of the evening.

Kevin King, who is quickly becoming “The Closer“ at home, took the court for the final set and did his job by defeating Mackenzie McDonald 5-2 in men‘s singles to provide the final margin.

The win was Philadelphia‘s (7-1) fourth consecutive victory, allowing the hosts to maintain their one-match lead over Washington (6-2), who defeated San Diego 21-20 in a match decided in a Supertiebreaker.

The secret to Philadelphia‘s success has been their chemistry on and off the court thanks in large part to WTT veterans Taylor Townsend and Fabrice Martin.

“They (Taylor and Fabrice) have been great teammates,“ said Atawo. “We are having a good time on and off the court. Taylor is a good coach as well as a good player and we learn a lot in practice.“

After Philadelphia dropped a tough 5-4 tie-break loss in mixed doubles, Townsend came right back in women‘s singles posting a 5-3 win to improve her record to 7-0 in singles.

Joining the Freedoms this evening was Wimbledon finalist Kevin Anderson. Although he could not play for the team that drafted him due to injury, Anderson made the most of his time in Philadelphia.

“I knew I would be playing for Philadelphia since Indian Wells,“ said Anderson. “I was excited to be part of Billie Jean King‘s team. She is an icon in our sport and I was looking forward to playing.“

Anderson added, “Although I couldn‘t play, I was excited to come and be part of this team and support them.“

TURNING POINT: With the women‘s doubles match tied at 2-2, Philadelphia would break Wickmayer on a crucial 3-all point to take a 3-2 lead en route to a 5-2 win, giving Philadelphia a 19-14 lead heading into men‘s singles.

NEXT ON: The Freedoms return to action for their third match in three days when they welcome the San Diego Aviators in a 12 Noon matinee on Thursday. Follow results on www.WTT.com/scores or www.philadelphiafreedoms.com. The match can also be viewed live at www.WTT.tv.