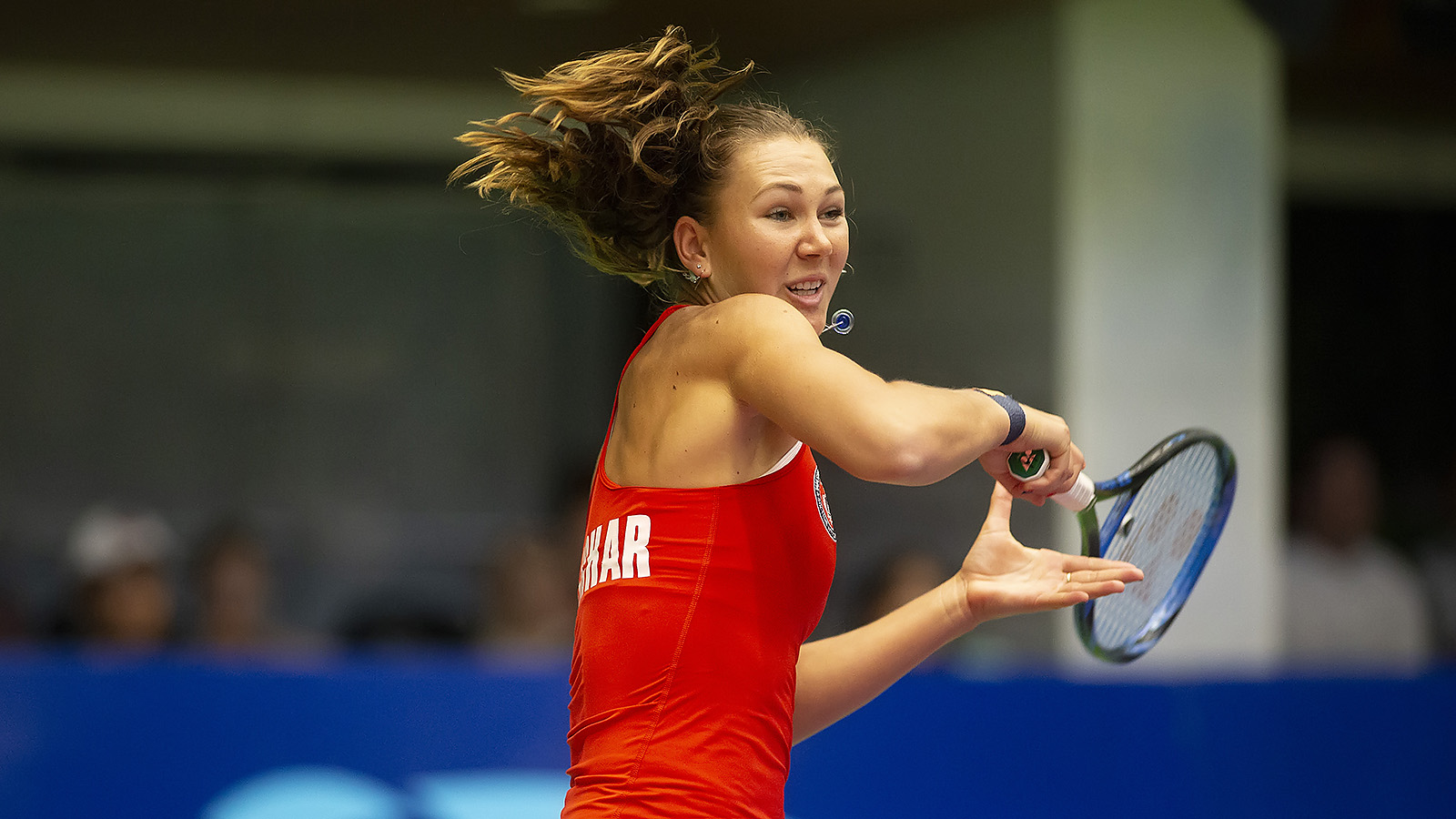 She might not be the most experienced player in World TeamTennis presented by GEICO, but 24-year-old American Nicole Melichar is finding her place on the league‘s colored courts ÔÇö and beyond ÔÇö this summer.

Melichar won both sets she played on Monday night for the Washington Kastles, helping clinch women‘s and mixed doubles for her team in a 24-14 road victory over the New York Empire at the USTA Billie Jean King National Tennis Center.

The victories were even sweeter for the doubles specialist individually, as she was 0-6 in sets in three matches since joining the team.

“It‘s tough when you lose a few close sets, but I thought I was playing well before. I think tonight, it just came together for me,“ she said.

“I‘m playing here in a month‘s time, so it was actually good to get familiar. We had a lot of fun tonight and it worked well. Getting used to hard courts and getting used to the formatÔÇªeveryone is playing unbelievable. In the first few matches we played, the atmosphere was great and you know you have to fight for every single point. Maybe I wasn‘t at my sharpest, but I got there at some point.“

The 24-year-old American arrived in Washington, D.C. for the Kastles for her first World TeamTennis season riding high, after she claimed her first Grand Slam mixed doubles title alongside Austria‘s Alexander Peya at Wimbledon.

Seeded No.11 in the draw, the duo took out two higher-seeded pairs before defeating former WTA world No.1 and two-time Australian Open singles champion Victoria Azarenka, and five-time Grand Slam doubles champion and former doubles world No.1 Jamie Murray, in the final in straight sets.

In addition, Melichar and Czech veteran Kveta Peschke, a former WTA world No.1 in doubles who is also well-known to WTT fans, made the women‘s doubles final at Wimbledon as the No.12 seeds ÔÇö falling in the final to two more Czechs in Barbora Krejcikova and Katerina Siniakova.

“You always go into a tournament wanting to do your best ÔÇö but if someone would‘ve told me I‘d be a finalist [in doubles] and win the mixed before the tournament, maybe I‘d think they were a little bit crazy,“ Melichar reflected.

“The fact that it happened, I felt like I belonged there. I didn‘t feel like a stranger which was a nice, comfortable feeling. I hope I can just continue going forward and just keep improving.“

Though Melichar bleeds the red, white and blue of Team USA and is a Florida resident, there was a decidedly Czech connection between the four players in the women‘s doubles final at the year‘s third Grand Slam.

Melichar was born in Brno ÔÇö the same hometown as Krejcikova ÔÇö in the Czech Republic, before moving to the United States with her family as a baby.

“We‘re friends on tour, as close friends as you can be with other tennis players,“ Melichar said of her Wimbledon conquerors. “We‘ll go and have dinner together, or we see each other in locker rooms and stuff ÔÇö we talk. They‘re nice girls, and they played better than we did that day.“

Having never previously been past the round of 16 at a Grand Slam in women‘s doubles, Melichar nonetheless had little time to dwell on her breakthrough result.

Less than 24 hours later, she was on Centre Court on the final day of the fortnight in the mixed ÔÇö and she and the 38-year-old Peya were crowned as this year‘s final Wimbledon champions in straight sets.

“Honestly, I was so happy for him, because he had played a couple of finals already. They hadn‘t gone his way and he‘d lost a couple,“ Melichar confessed of her partner, who was contesting his third career Grand Slam doubles final and second in mixed doubles.

“We wanted to win, but we also wanted to not have that pressure. We just told each other, ÔÇÿHey, let‘s go out and have fun.‘ Even before the match, I asked him, ÔÇÿWe‘re playing the US Open, right?‘ and he said, ÔÇÿWell, I haven‘t made any other plans!‘

“After Wimbledon, it was like, ÔÇÿWell, we‘re playing next year, right?‘, and I was like, ÔÇÿAll right ÔÇö let‘s do it!‘ So, we‘re set together for a while, and we have fun. I think that‘s the bottom line in mixed.“

Melichar‘s exploits across the pond have seen her reach new heights in the WTA rankings: she currently sits at world No.18 in doubles, which is a career-best.

When the World TeamTennis season comes to a close in a little more than a week‘s time, Melichar and the Kastles hope to be holding the King Trophy as league champions.

However, the American also has her sights set on another kind of season-ending experience come the fall: she hopes that she and Peschke will feature among the eight best doubles pairs that qualify for season-ending WTA Finals in Singapore in October.

“I‘d love to make Singapore. That‘s definitely a goal for Kveta and me,“ Melichar said. “We want to keep improving, now that we‘re both ÔÇö well, she was Top 20 [before], but I‘m Top 20 now ÔÇö hopefully, we can maybe get some seedings in some of the bigger tournaments which we didn‘t get before.

“We just want to keep growing our gameÔÇªand get more consistent at what we do.“