Freedoms Defeat Lasers To Remain Perfect On The Road 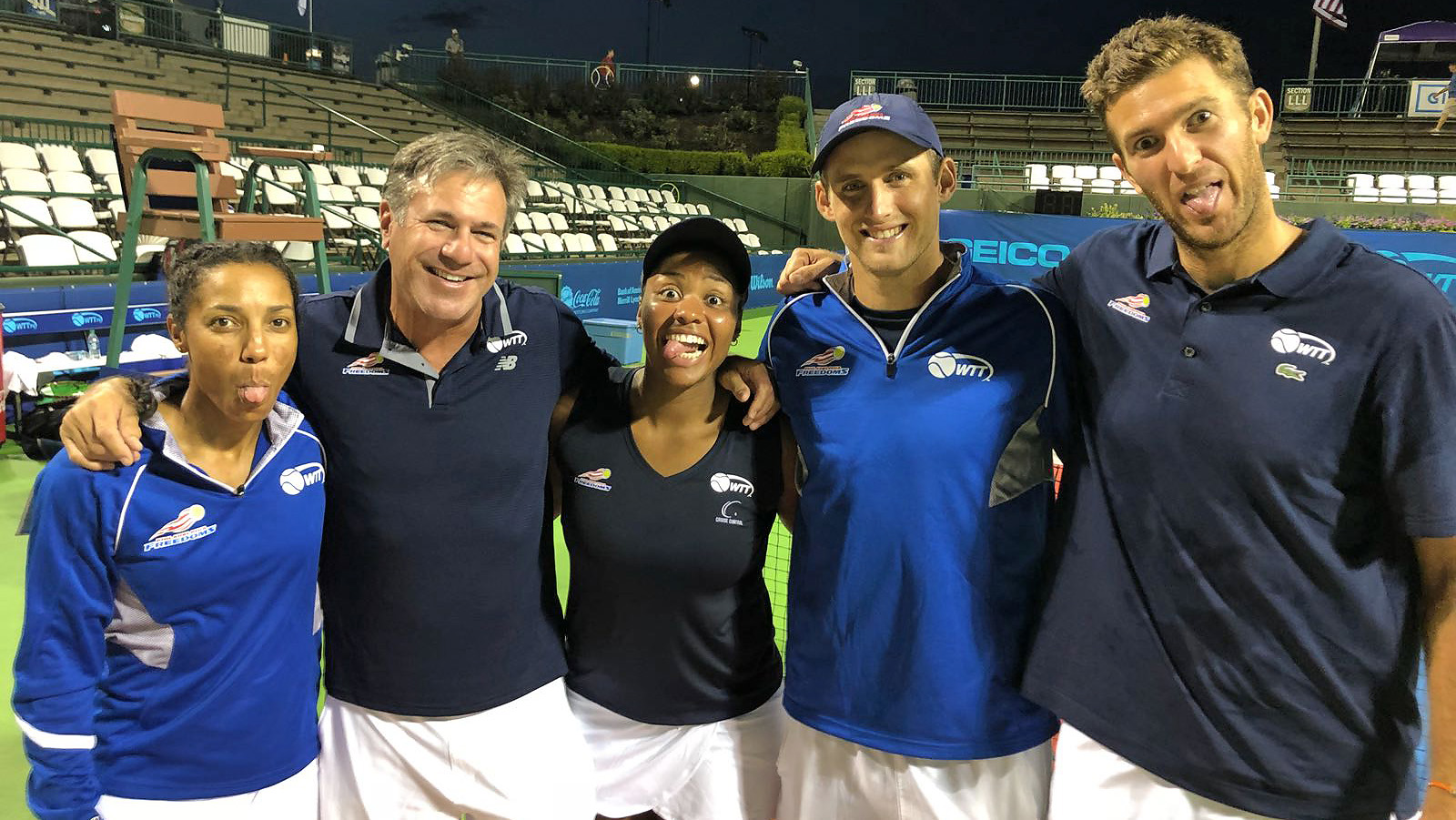 Taylor Townsend played three sets Sunday, July 22, and won them all. She accounted for 15 games in the Philadelphia Freedoms‘ 24-19 win at the Springfield Lasers.

But as she cooled down after the match, she wasn‘t interested in talking about herself.

“I think everyone did a really great job today,“ Townsend said when asked what parts of her game were strong in the match. “It‘s never easy conditions in Springfield, especially with us coming from playing two matches indoors. Everyone did an awesome job in holding up their end and Kevin (King) gave us a great start in men‘s singles.“

Townsend and partner Raquel Atawo had their serve broken by Springfield‘s Vania King and Abigail Spears, but broke right back to tie the set at four and force a nine-point tiebreaker. That evened the overall match score at 9-9 after two sets.

Atawo and Townsend scored the winning points in that tiebreaker while receiving serve. That’s not an easy feat on the notoriously fast surface at Cooper Tennis Complex‘s Mediacom Stadium.

King and Fabrice Martin kept the momentum going for first-place Philadelphia (5-1). They defeated Miomir Kecmanovi─ç and Daniel Nestor 5-4. King and Martin got an early break of Nestor and led the set 4-2. But Springfield‘s duo broke King to force a tiebreaker to decide the set. King and Martin won the deciding point to give the Freedoms a 14-13 lead at halftime.

That was as close as Springfield could get. Townsend was strong in women‘s singles, breaking her countrywoman King twice to win the set 5-3. She then teamed up with Martin to dominate mixed doubles by the same score.

In all, Townsend won total of 79 points in the match and 60 percent of her games. She also converted four break points. Those were match highs.

“Taylor played amazing. I think she put a little pressure on herself to make things even better than they needed to be, but she‘s playing great,“ Freedoms coach Craig Kardon said. “I told her just to get out her own way and let herself play. She‘s been a rock on this team and we can always count on her for points. I‘m really proud of her.“

And she was still working hard when the match was over. Townsend, the youngest player on her team by five years, stood at the bench with her teammates, coaching them up on things she observed in the match.

“I feel like in tennis you can learn anything from anyone. It doesn‘t matter the age,“ she said. “We all have different strengths and different weaknesses. And this is a team. We‘re all trying to help each other get better. There are some things that people see on the sideline that you don‘t see while you‘re playing. I‘m going to say something because I‘m trying to win.“

And she is winning. Townsend won singles crowns this year in Dothan, Alabama, and Charleston, South Carolina. She also won a doubles title at the $125k Indian Wells tournament. Her teammates would be wise to listen.

“She‘s very interested in the game and likes to help out,“ Kardon said. “It‘s fun for everybody when she gets involved.“

Kecmanovi─ç defeated King in men‘s singles, the only set Springfield won in the match. That set was a thriller, with the players holding serve all the way into the nine-point tiebreaker. Kecmanovi─ç scored the last two points while receiving to get the 5-4 victory.

Springfield falls to 2-4 with the loss. The Lasers won the first two games of their homestand before losing the last two. Lasers coach JL de Jager wasn‘t discouraged, though.

“It was close all the way through,“ he said. “We played well, but (the Freedoms) are a good team. That‘s why they‘re in the lead. It‘s tough, but all that I can ask from the team is to give their best effort. As long as they‘re trying 100 percent, I‘m happy.“

TURNING POINT: Atawo and Townsend were on the ropes in women‘s doubles. They trailed 4-3 with King serving for Springfield. Atawo and Townsend fell behind 3-1 in that game but reeled off three straight points to win. That tied the set at four and set up a decisive nine-point tiebreaker. Atawo and Townsend won that one, too, and Philadelphia didn‘t trail in the team score the rest of the night.

NEXT ON: Springfield hits the road after wrapping up a four-match home stand. The Lasers get a rematch with Philadelphia on Tuesday, July 24, at 7 p.m. Follow results on www.WTT.com/scores or www.philadelphiafreedoms.com. The match can also be viewed live at www.WTT.tv.