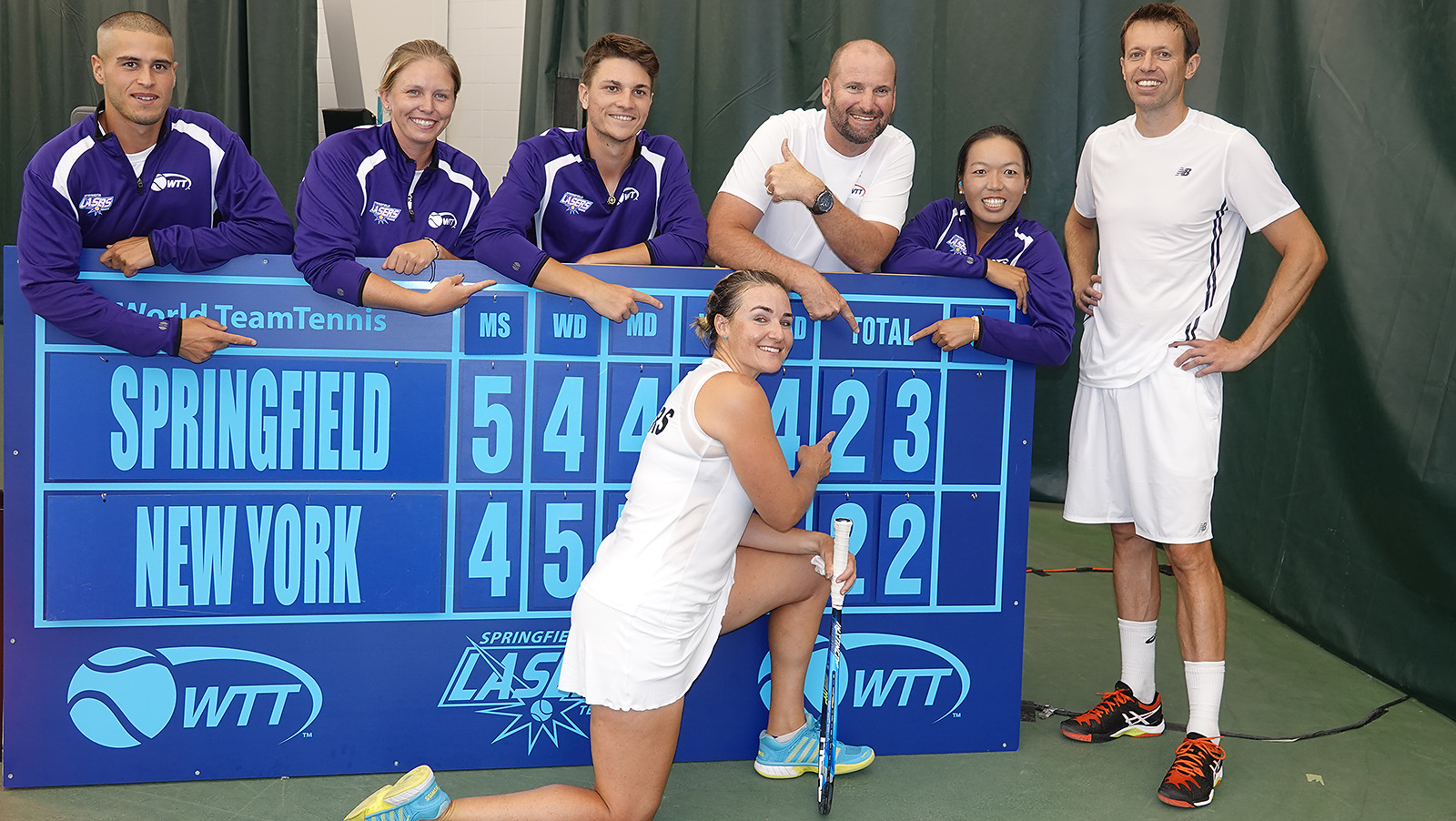 When Daniel Nestor toed the baseline for one last serve, he wasn‘t thinking about a victory. Thankfully for the veteran and his Springfield Lasers teammates, they got one anyway.

Nestor served two of the final Supertiebreaker points to give Springfield a thrilling 23-22 win over the New York Empire in front of a boisterous crowd Thursday, July 19, at the Cooper Tennis Complex indoor courts. Teammate Abigail Spears secured the win on a deciding match point with a hard smash at the net,

“I was going to go with my favorite serve at that moment and get ready to volley,“ Nestor said. “What else can you do? You can‘t start thinking about winning and losing. That‘s experience.“

He credits his experience with that thought process. He turned pro in 1991, after all. That experience has been valuable to the Lasers, who have won two in a row to improve to 2-2 on the season.

“He‘s got a lot of experience and (WTT) is about experience and winning the big points,“ Springfield coach JL de Jager said. “I think Daniel played a great match. His returning was much better tonight. As a team we‘re playing better. We like the indoors, obviously, and Abigail played well.“

Spears was the hero for the second night in a row, playing three sets and winning two. This after she subbed in at women‘s singles for an injured Vania King and sealed a win over San Diego in extended play last night. Spears is on a roll after advancing to the mixed doubles quarterfinals and women‘s doubles semifinals at Wimbledon.

“I‘m just enjoying the moments a little bit more,“ Spears said. “With my doubles partner at Wimbledon, we had such a good time there and she‘s so positive. We were trying to be super aggressive on the court. That‘s how we have fun. We were able to do it and execute. It was one of the rare times where it all comes together and works. We‘re fortunate that it did.“

Against New York (0-4), Spears and King dropped a tough 5-4 decision to Mar├¡a Jos├® Mart├¡nez S├ínchez and Tatjana Maria in women‘s doubles, the second set of the match. Spears defeated Maria 5-3 in women‘s singles, the fourth set, then had to turn around and immediately play mixed doubles. That was a challenge.

“I was tired from the adrenaline crashing,“ Spears said with a laugh. “Once I hit that first ball (in doubles), I started to get it back. I was just on a high from singles, so it was hard to focus.“

Miomir Kecmanovi─ç got the Lasers off to a winning start for the second night in a row, outlasting New York’s Dennis Novikov 5-4 in men’s singles.

Kecmanovi─ç charged the net to get to a drop shot and buried the ball in the back corner to win the nine-point tiebreaker 5-2.

It’s a resilient display by the 18-year-old Serbian. He lost his first two sets in WTT play, but is perfect in his last two.

“It‘s fun. He‘s got a good attitude and he‘s one of the top players in his age group,“ Nestor said. “He‘s got a bright future, so it‘s nice to share my experience and watch him flourish.“

The World TeamTennis format can help Kecmanovi─ç flourish, too.

“The crowd comes to see Supertiebreakers. A 24-12 match isn‘t fun. This is fun, and it‘s great for the young players to experience this pressure,“ de Jager said. “When they play on a tour, there‘s so much pressure on every match. This gets them ready for that.“

TURNING POINT: Spears scored a crucial break against Maria in women‘s singles to build up a 4-2 lead. She went on to win that set 5-3. That two-point cushion proved big in the final score.