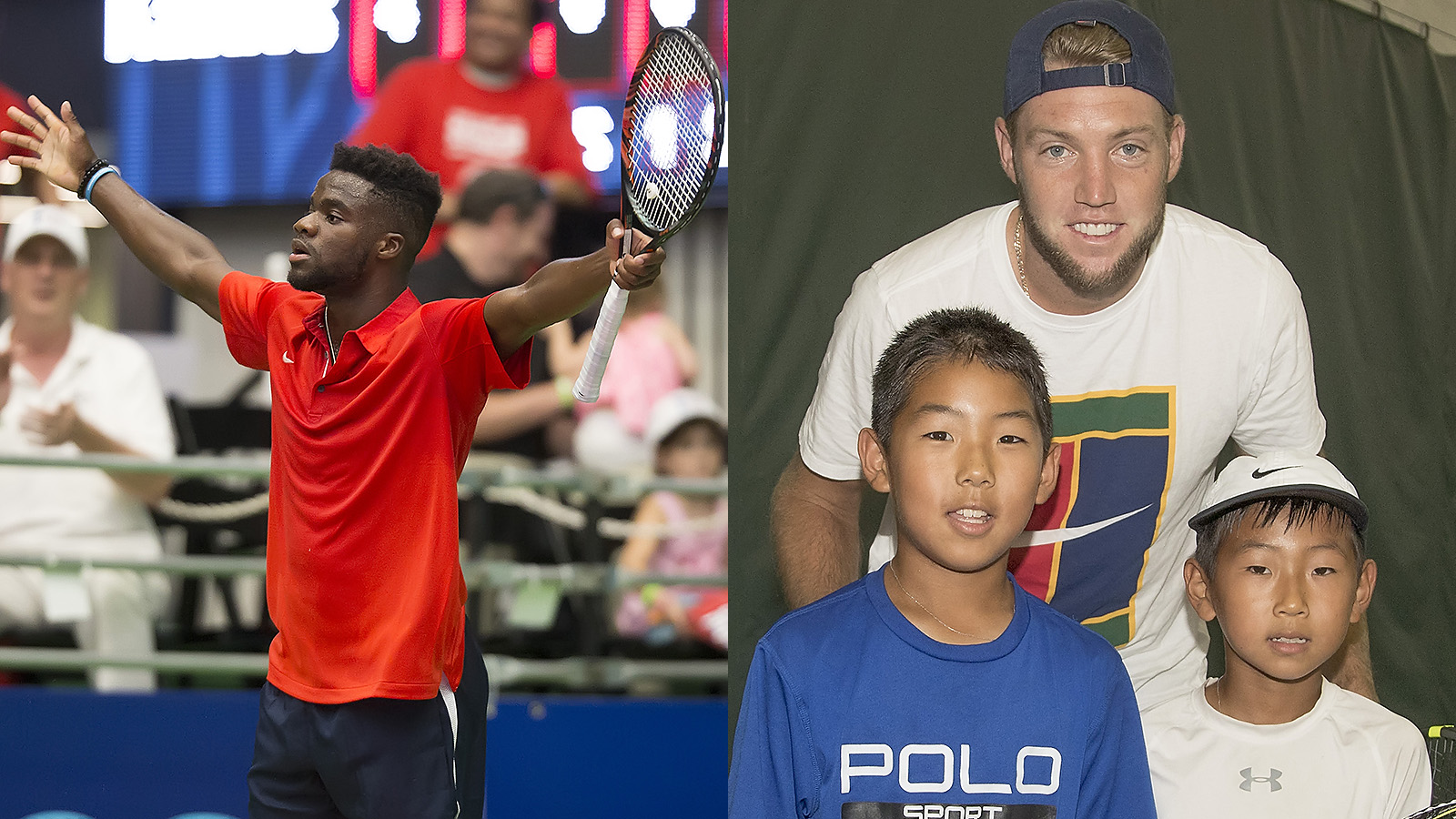 Frances Tiafoe can still remember it. At eight years old ÔÇô maybe even as young as seven ÔÇô he started going to Washington Kastles match nights in D.C. with a group of kids from the Junior Tennis Champions Center in nearby College Park, Md., where he trained.

It was there that he would meet team members and tennis stars Venus and Serena Williams, as well as World TeamTennis mainstay Bobby Reynolds, an American Tiafoe looked up to.

He also met team owner Mark Ein, who Tiafoe told ÔÇô quite seriously: “I‘m going to play for you one day.“

This summer marks the second consecutive that the 20-year-old rising star in men‘s tennis is donning a Kastles jersey. They are some of his most enjoyable nights of the year: A packed house inside the Smith Center at George Washington University, music blaring, man on stilts, cheerleaders. And tennis.

Tiafoe‘s eyes light up just talking about it.

“The matches are incredible… the fans are insane,“ Tiafoe told WTT.com recently. “It‘s one of the two times a year I can play tennis at home. I have my friends and family there watching. I have everything I need. It‘s good.“

Tiafoe also has a bevy of D.C.-area youngsters who look up to him in attendance each night, too, a fact that he‘s well aware of. Much like himself 10 and 12 years ago, he knows the power of a sports hero ÔÇô particularly one you get to see in person, and one that is showcased in a setting that allows for charisma, smiles and a bit of fun.

Each summer World TeamTennis presented by GEICO connects some of the biggest names in the sport of tennis with kids in communities around the country in a way like no other sports league can. And stories like Frances‘ (while few and far between) are just the beginning of how a night at WTT means more than just world-class tennis.

Tonight at Mediacom Stadium in Springfield, Mo., Jack Sock makes a return much like Tiafoe in D.C. for a second year in a row, only his has an extra special meaning: He played ÔÇô and won ÔÇô some of the biggest USTA events of his junior career at the very Cooper Tennis Complex that hosts Springfield Lasers matches.

“The drive last year put a smile on my face,“ Sock said of his journey back to Cooper. “I hadn‘t been back since I was a junior, but I have the most clear memories from being there as a kid. It was the same drive we did with our parents in our suburban. ÔÇÿTurn left into Cooper Tennis!‘ (Laughs.) It was special.“

Sock also knows how special it is for him ÔÇô a Grand Slam winner in doubles, a mixed doubles gold medalist at the Olympics and recent top 10 singles player ÔÇô to come back to his roots and spend time with kids from the area.

“The age I was when I was there, if we had a pro guy or girl coming inÔÇª that would have been really special,“ the Kansas City resident explained. “I hope I can provide that for them. I just want to put on a good show and play my best tennis. When I was growing up I would go and watch the [now defunct] Kansas City Explorers. It was so fun to watch, a dream come true. I just want to inspire kids while I‘m there.“

“I want to be known as the guy who helped people come into tennis,“ added Tiafoe. “I don‘t really care what race it is. I just want more kids playing the sport. There are so many opportunities, and the chance to travel the world and get out of your element and get uncomfortable. Tennis is a great sport ÔÇô it builds character.“

Tiafoe knows all of that from first-hand experience. He remembers not only meeting Ein ÔÇô who is now part-owner of the league in addition to the D.C. franchise ÔÇô at Kastles matches but also in College Park where he trained. They would hit together. A confident young Frances would tell him about future dreams.

“He would laugh and whatnot,“ Tiafoe said of Ein. “But last year I made it a reality.“

He continued: “Anytime I can give back to where I came from it‘s great. I love where I came from. ÔÇª The [Kastles] atmosphere is amazing. It gets so loud in there. I think it‘s fun. I think tennis needs that. The more noise the better. You can let people be themselves ÔÇô on the court or off of it.“

Sock said that‘s another important aspect to him: The colorful piece of WTT isn‘t just about the court itself, but also the atmosphere overall. Sure, there is nothing like Centre Court at Wimbledon (where Sock just won a second men‘s doubles title ÔÇô no big deal), but the Friday night lights feel is something unmatched in the sport. And brings out the best from the players.

“WTT shows a different side of players,“ he explained. “At tournaments you see the very focused and serious side; there‘s not a lot of smiling or laughing or joking. I‘m an outgoing guy. WTT shows my personality. I‘m pretty charismatic out there. I want as many people as possible to come out. I love being part of the community in that way.“

And who knows just how many little Franceses and Jacks there are in the crowd this coming weekend and this WTT season. You‘d suspect a few. We can‘t wait to meet them.