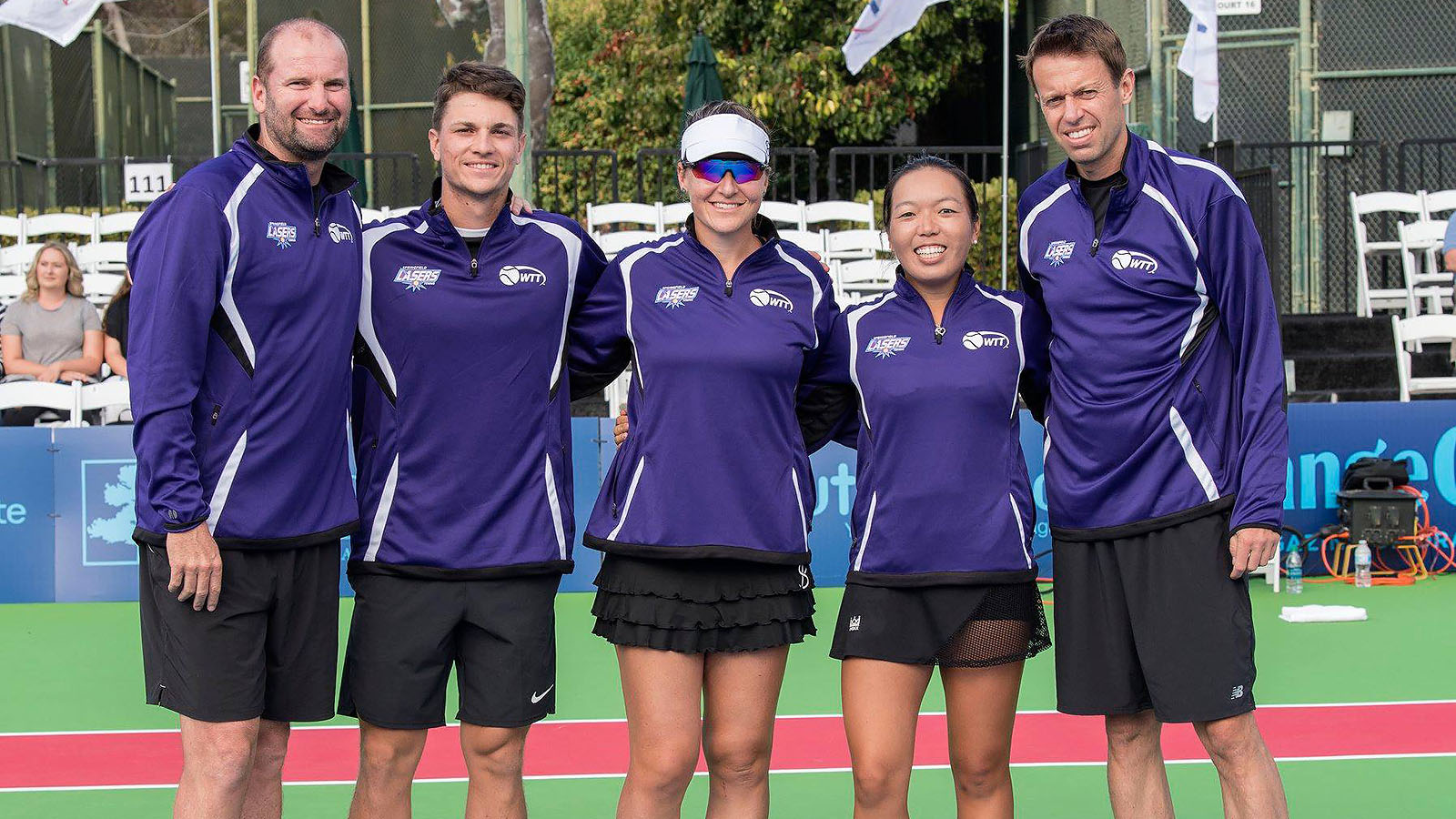 Springfield Lasers coach JL de Jager stands and leads the audience in clapping between points. He’s been known to hold on-court, halftime dance parties with young Lasers fans. There are some good reasons he focuses on fun and Harry Cooper is one of them.

Cooper died in April at the age of 91. There would be no Lasers without Cooper. The team plays at Cooper Tennis Complex and he purchased the World TeamTennis franchise for the Springfield-Greene County Park Board in 1996.

The Lasers honored Cooper with a pre-match moment of silence, then went out and captured a 22-20 Extended Play victory over the San Diego Aviators Wednesday, July 18. It was Springfield‘s home opener.

“I remember the first time I met him, my first year here, he said, ‘JL, I don’t care if you win or lose as long as the families have fun,'” De Jager, in his 12th year with the Lasers, said. “The first match I was having an argument with the umpire over a bad call. I looked over and he was at the top of the stands giving me a look, like ‘No. We don’t do this here in Springfield.’ I spoke a lot to him about life. I have so many great memories of him.”

There was plenty of fun for the Lasers and a standing room only crowd at the Cooper Tennis Complex indoor court. Miomir Kecmanovi─ç got the home team off to a winning start with a well-fought 5-4 win over Marcus Willis in men’s singles. The players split four 3-all points as everyone held serve to set up a nine-point tiebreaker.

The 18-year-old rookie fell behind 3-1 early, but captured four straight points to earn his first singles win in WTT play. Kecmanovi─ç had dropped a pair of 5-love decisions to open the season.

“It’s a good feeling, especially since I didn’t win a game in the previous two. I’m happy I got the win for the team,” Kecmanovi─ç said. “I played Taylor (Fritz) and Sam (Querrey) and almost all of the games were 3-all. The (5-0) scores weren’t very realistic. Tonight was a very good match and a great experience for me.”

The hero of the night, though, was Abigail Spears. She teamed up with Vania King for a women‘s doubles victory, then ÔÇö when King was injured during women‘s singles ÔÇö stepped up and won the first game in extended play to secure the victory for Springfield (1-2).

“I feel bad for Vania. Hopefully she can heal up quickly,“ Spears said. “But it was so much fun. I have family here and it was fun to get the crowd involved.“

Spears and King twice broke Anna-Lena Groenefeld‘s serve to earn a 5-3 win in women‘s doubles. King served the final game, getting a let serve to pop up and over the net en route to the victory.

That put Springfield in front 18-15 heading into the final set, women‘s singles. King was leading San Diego‘s Naomi Broady 2-1 when she stumbled and fell as she rushed toward the net. She tried to continue, but had to sub out trailing 4-2.

Broady went on to win the set 5-3 and force extended play. But Spears served first and smoked two serves past Broady to end the set and the match. It was a homecoming of sorts for Spears, who has family in Ozark and Walnut Grove, not too far from Springfield.

“My dad‘s side of the family is from around here. I‘ve got two aunts, cousins and my great aunt here tonight,“ Spears said. “This is pretty special for me.“

Spears also teamed up with Daniel Nestor to win mixed doubles, again getting a break of Groenefeld. The Lasers won that set 5-3 to grab an early 10-7 lead.

San Diego (1-2) was victorious in men’s doubles, getting a deciding-point break of Kecmanovic in a 5-3 win. Willis served double faults in two of those games, but managed to overcome them to hold serve. The Aviators won two of three deciding points in that set. That victory brought them to within 13-12 at the halftime break.

But the visitors never could take the lead on a special night that paid tribute to a Springfield tennis icon.

TURNING POINT: Women‘s doubles was 3-all when Groenefeld stepped up to serve. She won the first point, but King and Spears responded with four in a row of their own to break serve and take control of the set. The 5-3 win kept Springfield in front heading into the final event of the night.

NEXT ON: Springfield’s homestand continues Thursday at 7 p.m. The New York Empire will be the guests at Mediacom Stadium. Follow results on www.WTT.com/scores or www.springfieldlasers.com. The match can also be viewed live at www.WTT.tv.