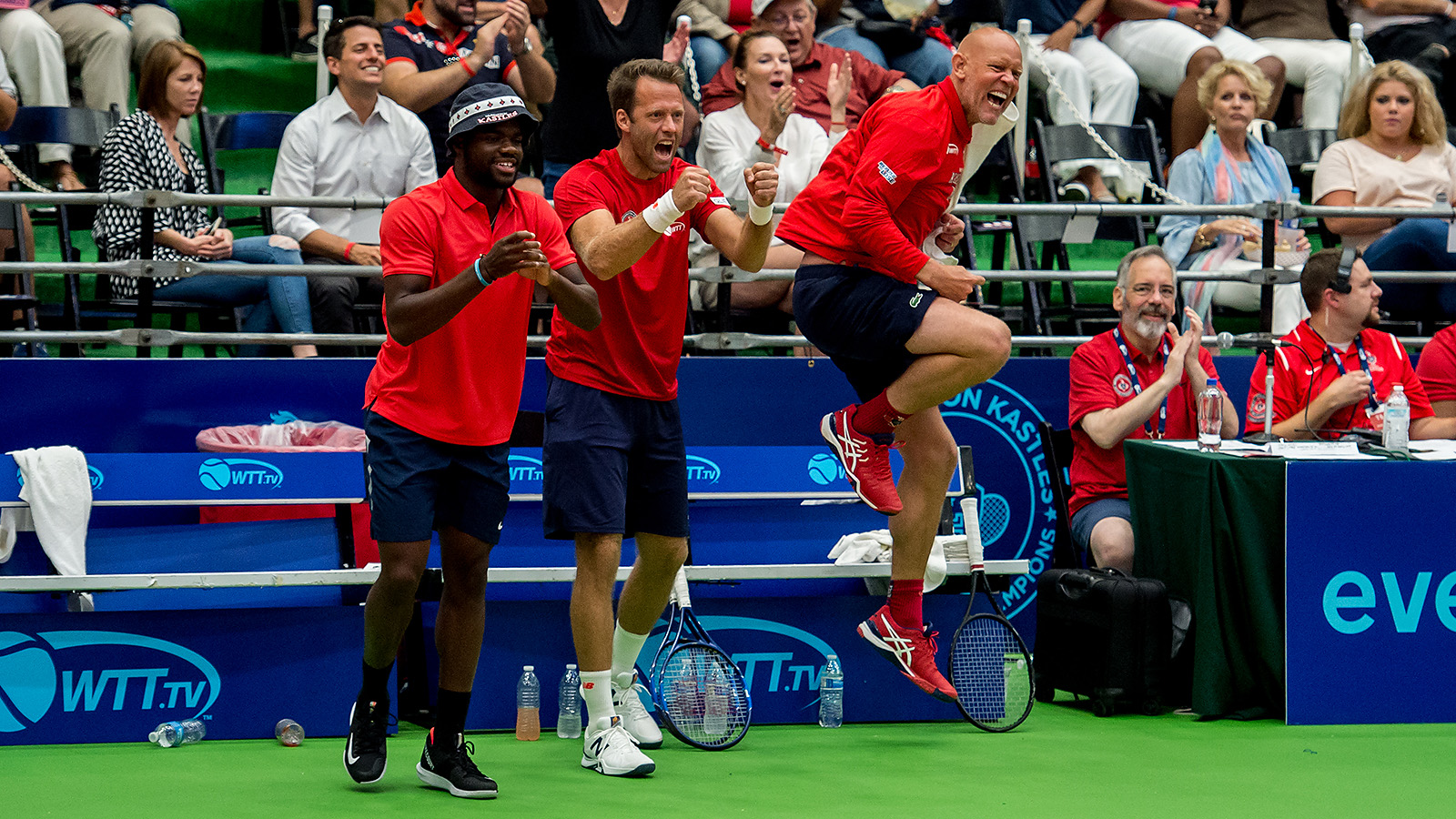 The women set the stage and local favorite Frances Tiafoe worked overtime to seal the deal, as the Washington Kastles triumphed 21-20 in their home opener over the New York Empire.

Tiafoe beat the Empire‘s Dennis Novikov, 7-4 in a Supertiebreaker, after dropping a tense men‘s singles set.

The Kastles also took advantage of a decisive 5-1 win by Madison Brengle in women‘s singles and a tight victory in women‘s doubles to move to 2-0 on the season in their quest for a seventh World TeamTennis title.

It was a hard but satisfying win for Tiafoe, the world‘s 45th ranked player, who trained locally in College Park, Md.

“It was ugly, but a ÔÇÿW‘ is a ÔÇÿW,‘“ Tiafoe said. “I was pretty [annoyed] to be in that situation, but I just dug for every point. If I can contribute to this team and help it get back to winning matches, that‘s all that matters to me.“

The Kastles‘ Robert Lindstedt and Christina McHale kicked off the home opener by grabbing the first game of the match in mixed doubles. But the Empire prevailed in the first set, 5-3, behind strong serving from Maria Jose Martinez Sanchez of Spain and England‘s Neal Skupski.

The Kastles duo of McHale and Brengle took an early 1-0 lead in women‘s doubles with a break of Tatjana Maria‘s serve. Brengle served for the set at 4-3, but the Empire broke to tie the set 4-4 and force a tiebreak.

Trailing 4-2 in the tiebreak, the Kastles won the next three points, sealing the set on a volley winner by McHale.

“That was so exciting,“ said McHale, who was called on short notice to substitute for Wimbledon mixed doubles champion Nicole Melichar. “I just saw it and went for it. I am having so much fun with this team.“

The Kastles momentum was short-lived. The Empire won the first two games of men‘s doubles and cruised in the set to give the team an overall 14-11 lead.

Brengle, however, reeled the Empire back in with a dominant performance in women‘s singles. The Delaware native used penetrating groundstrokes and great court coverage to secure a 5-1 win over Maria and give the Kastles a 16-15 overall edge heading into the final men‘s singles event.

“I tried to compete not really paying attention to the score,“ Brengle said. “I played really well, and the crowd was really great. I just went out and gave everything I had for the team.“

Novikov proved to be a game opponent against Tiafoe in singles, breaking him in the third game to tie the match at 17-all. Tiafoe broke right back and broke him again to take a 4-2 set lead. However, Novikov saved three match points to eventually force a tiebreak, and prevailed in the tiebreak, 5-3 to force a the 13-point Supertiebreaker.

Tiafoe won several long rallies to gain a strong edge and secured the win when Novikov forehand hit the net.

For Tiafoe, it was a great win before a hometown crowd.

“You don‘t find yourself being able to play at home much, and you can look up and see everyone you know in the crowd,“ he said. “Being able to see this team grow over a number of years, it‘s been a dream to play here. It‘s America‘s team. I can‘t complain.“

TURNING POINT: A forehand from Dennis Novikov failed to clear the net, giving Frances Tiafoe the victory in the Supertiebreaker and securing the 21-20 win for the Kastles.

NEXT ON: The Kastles will remain in Washington and host the Orange County Breakers on Wednesday at 7:00pm Eastern. The Empire head back to New York and host the Philadelphia Freedoms Wednesday, also at 7:00 p.m. Eastern. Follow results on WTT.com, washingtonkastles.com and nyempiretennis.com. Watch live at WTT.tv.