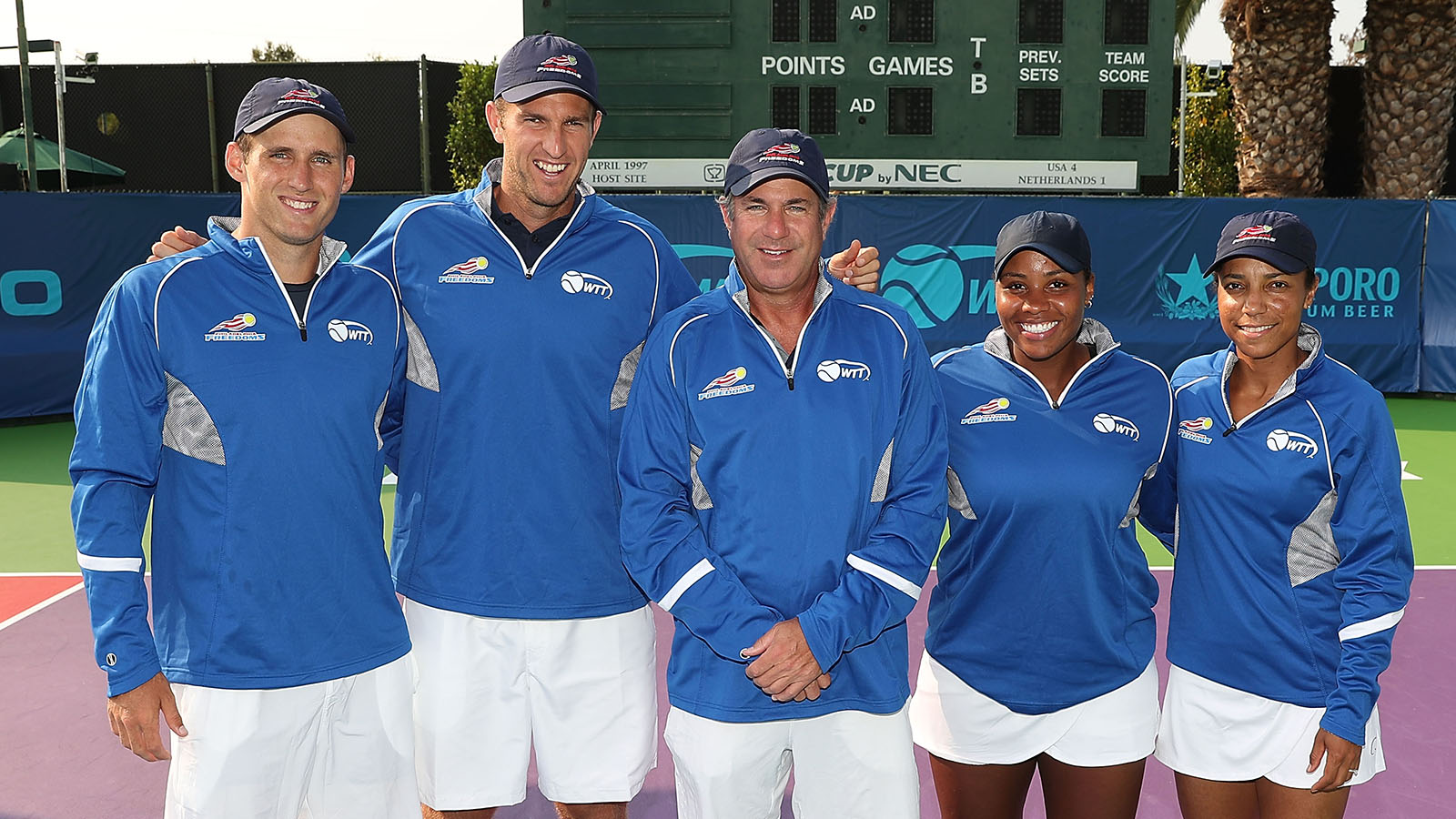 Entering the 2018 season with 13 straight home victories at the Palisades Tennis Club, the defending champion Orange County Breakers had their home winning streak snapped after suffering a 23-16 loss at home against the Philadelphia Freedoms in the first match of the season.

The night began in a mixed doubles showdown featuring reigning WTT Female MVP Andreja Klepa─ì and world #13 Sam Querrey taking on Taylor Townsend and 2016 WTT Male Rookie of the Year Fabrice Martin. The duo of Townsend and Martin earned an early break at 1-2 on Klepa─ì‘s serve en route to a 5-3 victory.

Townsend was then joined on court by two-time Wimbledon semifinalist Raquel Atawo to face 2017 WTT Female MVP Nicole Gibbs along with Klepa─ì. The Breakers duo of Gibbs/Klepa─ì faced 3-all points in each of their first three service games, winning the first two, but were unable to hold serve in the third one. The lone service break was all Atawo/Townsend needed, as the all-American duo ran away with the set to earn a 5-2 victory, giving the Freedoms a 10-5 lead over the Breakers.

Freedoms coach Craig Kardon was pleased with the performance of his team‘s two ladies. “Taylor played great. Raquel as well. They make a great team together, so looking forward to seeing them have a successful season.“

The third set of the evening featured two WTT debuts, as Marcelo Demoliner of the Breakers and Kevin King of the Freedoms experienced the unique format for the first time. After the match King shared his excitement of being out on the court in the new environment. “I loved it. It was a great atmosphere out here, I love being on a team again. It‘s been a few years since playing in college, so I really enjoyed it out here.“

Demoliner teamed up with the marquee player of the evening, Sam Querrey, while King joined forces with Martin. The American-Brazilian duo of Querrey and Demoliner got off to quick start and earned a break advantage to go up 2-0, however the Freedoms would answer right back and win five of the next six games to earn a 5-3 victory.

Entering halftime with a comfortable 15-8 lead, the Freedoms were in a strong position to take out the home squad. In the critical fourth set of the contest, Townsend raced out to an early 3-0 lead over Gibbs, however the former two-time NCAA champion fought back and won three straight games to even it up. Townsend then responded with a 80 mph ace out wide on the deuce to win a huge 3-all point to end the momentum of the Breakers, before subsequently breaking Gibbs in the next game to win the set.

Although the Freedoms had a 20-11 lead heading into the final set, the match is never over in WTT as anything can happen if the match is forced into Extended Play. King, the former Georgia Tech standout was trying to close out his first ever WTT match against an American star, while Querrey, the recently married Southern Californian, was trying to mount a comeback and erase a large deficit for his Breakers.

Winning 11 of his 12 first serve points, Querrey took down the lefty 5-2 and forced the match into Extended Play, with the Freedoms enjoying a 22-16 lead. Serving first with only one game needed to finish the job, King put aside any nerves he may have had and held serve to earn a 1-0 victory in Extended Play to end any comeback hopes.

Kardon expressed his approval regarding the WTT rookie‘s debut. “Sam‘s a tough player, and then even tougher in this format because he serves so well. But Kevin came out against a top-20 player like Sam and performed as well as he could in his first match with a lot of pressure on him. He had to finish! So he finished.“

Breakers coach Rick Leach is aware of the pressures the defending champs may face. “I think everybody is going to be gunning for us this year. We‘re the defending champs and everybody wants to beat us. So we‘ve got to be a little more ready tomorrow, a little sharper on the 3-all points. I don‘t know at the end of the day what the final statistic was, but we need to win those big points and that‘s the difference really.“

TURNING POINT: Townsend saved two break points while serving at 3-3 in her set against Gibbs, coming up clutch with a kick serve out wide on the deuce side to win the crucial 3-all point as she put a halt to the Breakers momentum. Querrey‘s chances of possibly mounting a massive comeback in Extended Play were diminished as a result.

NEXT ON: The Breakers remain at home for Monday‘s match against the visiting Springfield Lasers that takes place at 6:00 p.m. PT. Sam Querrey will compete in his second of three matches for the Breakers this season. Follow results on www.WTT.com/scores or www.breakerstennis.com. The match can also be viewed live at www.WTT.tv.