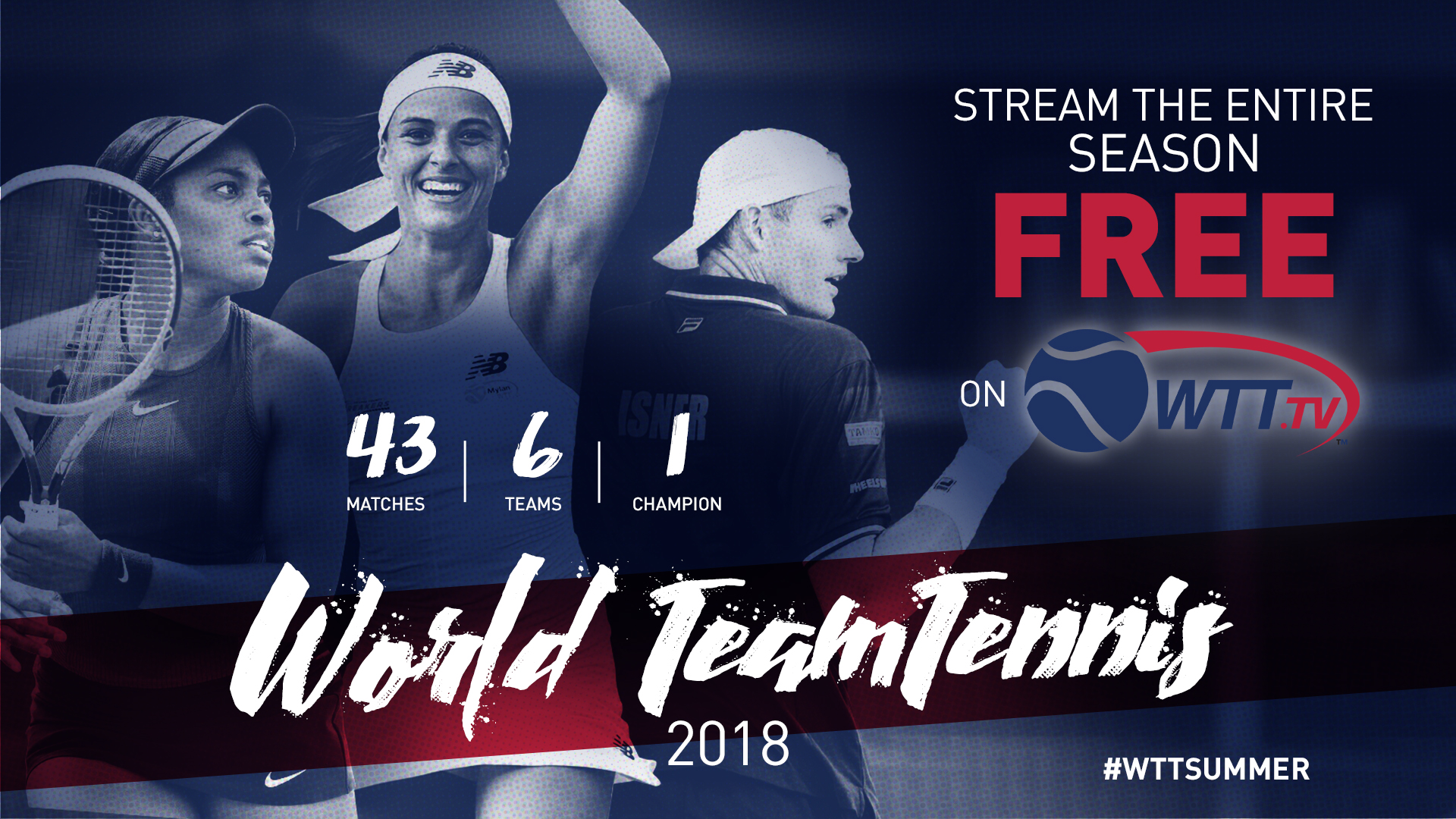 For the first time in World TeamTennis‘ 43-season history, every WTT match will be available to watch on the league‘s new streaming platform, WTT.tv presented by GEICO. With 43 matches over 22 days in six team markets, the 2018 WTT.tv schedule will include more than 100 hours of digital broadcast programming this summer.

Fans from around the globe will be able to experience the high-energy WTT team format with live or on-demand access to every match on WTT.tv‘s mobile-optimized website. Select live matches will also be available on World TeamTennis‘ Facebook and YouTube channels throughout the season, with other digital outlets to be announced soon. All 43 matches will be produced by WTT broadcast teams in high definition with expert commentary.

“World TeamTennis has a long history of bringing our special brand of tennis to the fans, and WTT.tv is the next chapter in our book,“ said WTT co-founder Billie Jean King. “Our new streaming platform gives fans the access and the opportunity to follow their favorite teams and players throughout the season in real time and stay current on their progress.“

“WTT.tv will give our fans around the world a totally new, season-long level of access to World TeamTennis matches and our world-class players,“ said Ilana Kloss, WTT CEO/Commissioner. “We‘re excited about using this digital platform to expand our reach and engagement with audiences globally.“

Match coverage begins on WTT.tv on Sunday, July 15, when the 2017 champion Orange County Breakers start their title defense at home against the Philadelphia Freedoms. The 2018 season concludes with the WTT Finals on Sunday, August 5, with the top two teams from the regular season.

For more information and to sign up for programming alerts and other information, go to WTT.tv.

MEDIA NOTE: Download the WTT.tv logo (in all formats) HERE.

World TeamTennis (WTT) showcases the best in professional tennis with the innovative team format co-founded by Billie Jean King in the 1970s. Recognized as the leader in professional team tennis competition, WTT features many of the world’s best players competing annually for the King Trophy, the league’s championship trophy named after King. In July 2015, WTT became the fifth major professional team sports league in the U.S. to reach the 40th season milestone. In 2017, team owners Mark Ein and Fred Luddy acquired majority ownership of the organization. The 43rd season of WTT presented by GEICO begins July 15 and concludes with the WTT Finals on August 5. On the recreational side of the sport, WTT Community Tennis operates team leagues and events, providing grassroots programming throughout the year. For more information, visit www.WTT.com. To watch World TeamTennis action this summer, visit www.WTT.tv.