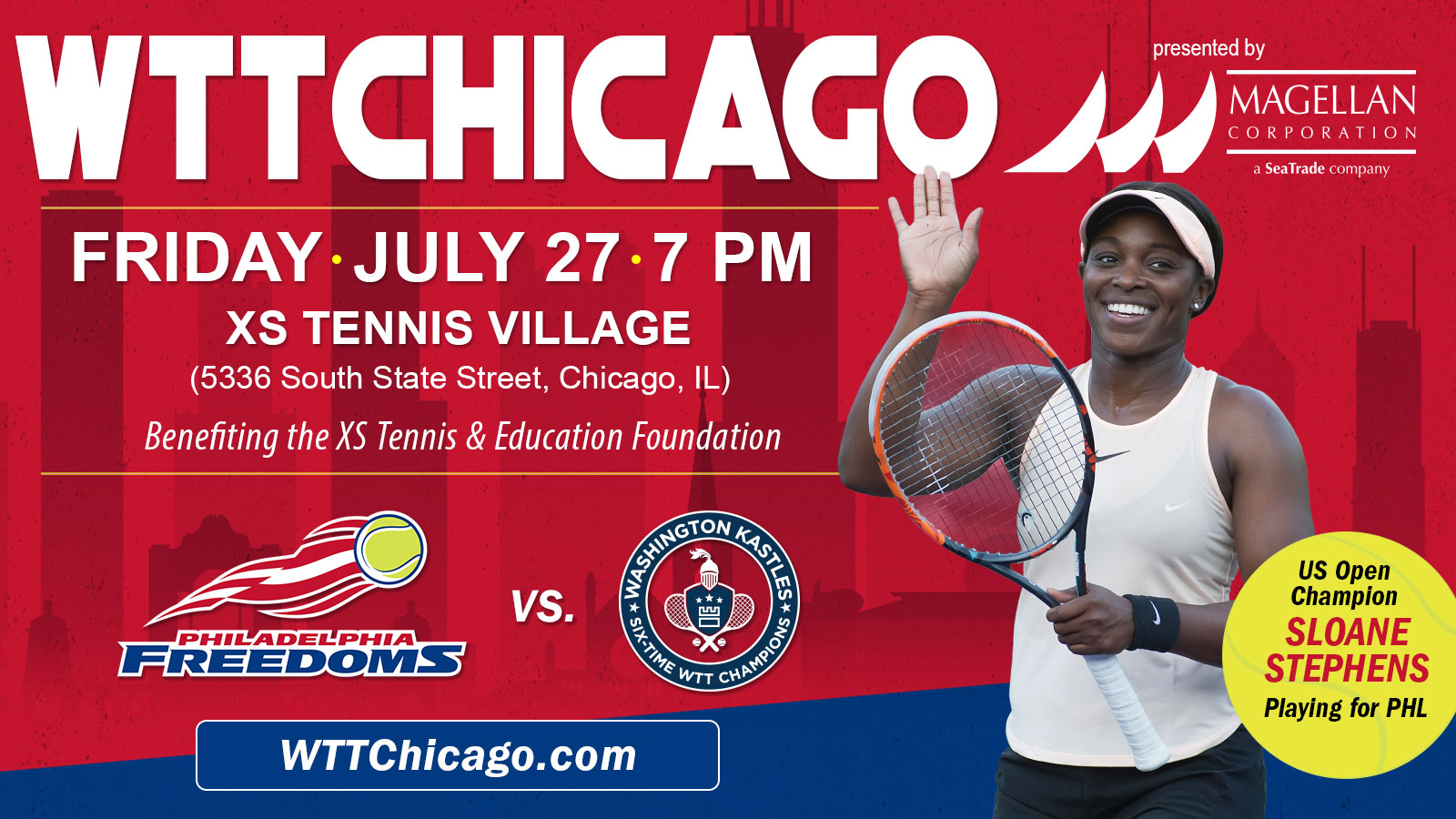 World TeamTennis (WTT) will make its return to Chicago on Friday, July 27, for WTT Chicago presented by Magellan Corporation when the Philadelphia Freedoms and the Washington Kastles face off in a regular season match at the XS Tennis Village on the South Side at 7:00 p.m. A special ticket presale to the historic evening kicks off today, with tickets as low as $35. Tickets go on sale to the general public on Wednesday, June 6 at 12pm CT at Ticketmaster.com

A portion of the proceeds from this match will benefit the XS Tennis and Education Foundation, which serves underserved Chicago youth with a pathway to college through sports and academics. Mark and Kimbra Walter will join King as the co-chairs of the event‘s host committee. Other committee members include Kamau Murray, Bob Arthur, Ilana Kloss, Les Coney and Bobby Schmuck.

XS Tennis Village, the venue for the WTT‘s special night in Chicago, was founded by Kamau Murray, a renowned tennis coach who previously worked with Townsend and is Stephens‘ current coach. At the brand-new venue, tennis fans will be treated to an intimate indoor setting with seats close to the action. Secure onsite parking will be free for all event attendees.

“This match in Chicago gives us the opportunity to showcase World TeamTennis in another major market,“ said WTT CEO/Commissioner Ilana Kloss. “Bringing the Freedoms and Kastles to Chicago is a homecoming of sorts for WTT. We hope this can be a more regular sight in the city in the near future.“

World TeamTennis has history in Chicago as the city was home to League headquarters between 1985 and 2002. It will have been more than 30 years since a WTT match was played in Chicago, dating back to the final season of the Chicago Fire franchise in 1986. Kloss coached the Chicago franchise to a WTT championship in 1983, a team that featured King on the roster. King also remains involved in the League she co-founded in 1974 as a minority owner.

“Tennis has a home in Chicago and we are thrilled to bring professional team tennis back to the city,“ King said. “We are also happy to showcase and support the great work that Kamau Murray is doing in the local community with the XS Tennis and Education Foundation and the new XS Tennis Village.“

Murray is excited to give local youth the opportunity to watch some of the world‘s best players in action. “When I was a junior tennis player, I had the opportunity to see Zina Garrison and Martina Navratilova play at the UIC Pavilion,“ said Murray. “In fact, I served as a ball kid. That experience inspired me to work harder and pursue my dreams in the same way that going to a Bulls game inspires young basketball players. I am excited to see professional tennis return to Chicago in a way that‘s affordable and accessible to people from all parts of the city. I was 30 years old the first time I had the opportunity to attend the US Open at the USTA Billie Jean King National Tennis Center. I am so excited that our youth will have the opportunity to see the reigning US Open champ play on the south side of Chicago, and have Billie Jean King present, so they too can be exposed and be inspired.”

WTT Chicago presented by Magellan Corporation between the Philadelphia Freedoms and the Washington Kastles will take place at XS Tennis Village (5336 S. State St., Chicago, Ill. 60609) on Friday, July 27 at 7pm CT, with a special pre-match VIP reception at 5:30pm.

World TeamTennis (WTT) showcases the best in professional tennis with the innovative team format co-founded by Billie Jean King in the 1970s. Recognized as the leader in professional team tennis competition, WTT features many of the world’s best players competing annually for the King Trophy, the league’s championship trophy named after King. In July 2015, WTT became the fifth major professional team sports league in the U.S. to reach the 40th season milestone. In 2017, team owners Mark Ein and Fred Luddy acquired majority ownership of the organization. The 43rd season of WTT presented by GEICO begins July 15 and concludes with the WTT Finals on August 5. On the recreational side of the sport, WTT Community Tennis operates team leagues and events, providing grassroots programming throughout the year. For more information, visit www.WTT.com.

About XS Tennis and Education Foundation:

XS Tennis and Education Foundation is a 501c3 organization. The mission of the organization is to provide Chicago‘s underserved youth with an enriching safe-haven and positive academic/athletic pathway to college through a community-based sports and academic enrichment program.

XS Tennis Village is a brand new 112,000 square foot athletic and academic enrichment center in the Washington Park neighborhood. Located near areas in urgent need of safe, positive programs through which youth can receive enrichment within their own community, the XS Tennis Village serves athletes, underserved youth, and the local community, from pre-K through adults. Chicago native and renowned tennis coach Kamau Murray is the Founder, President & CEO of XS Tennis Village.