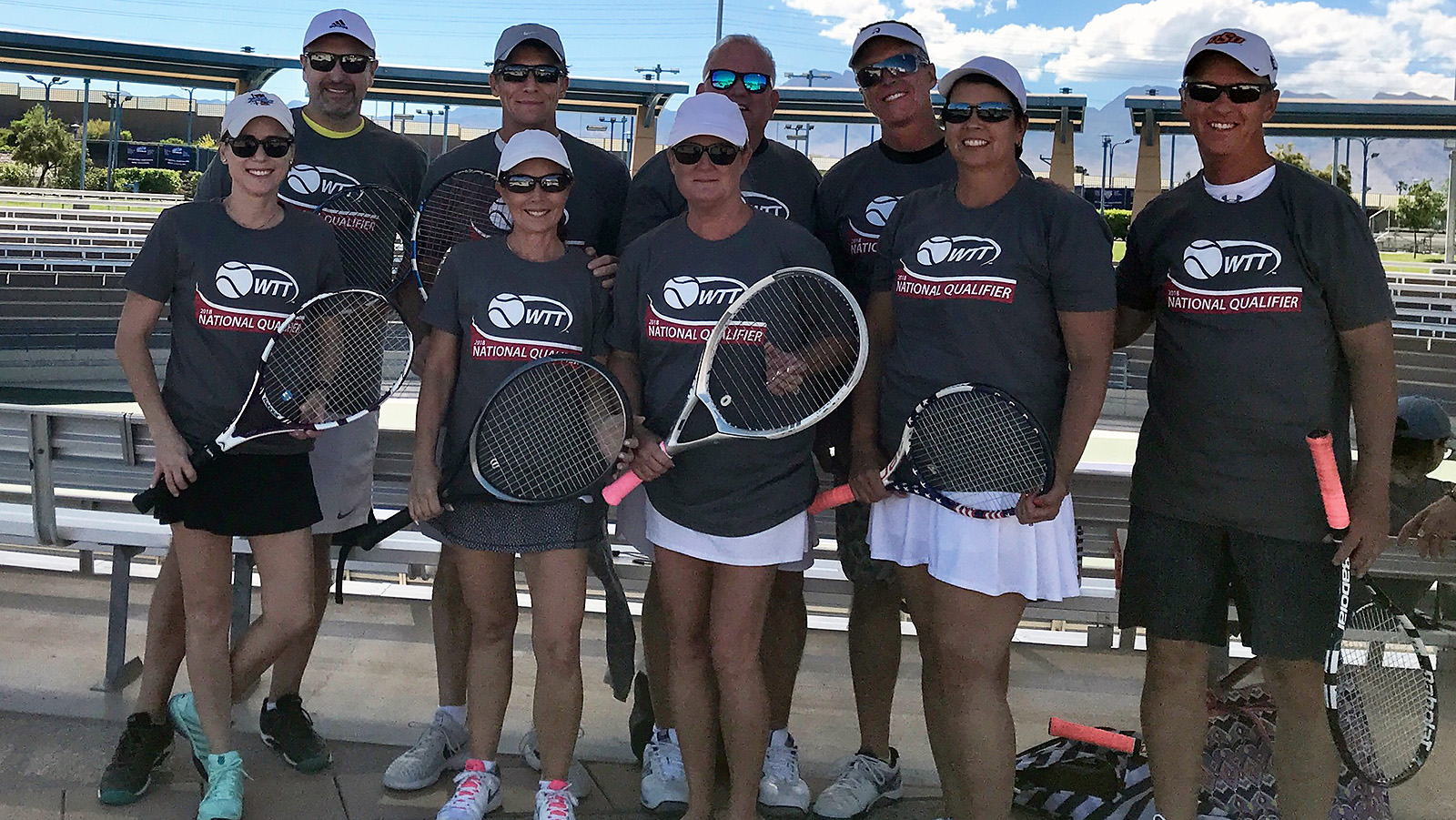 The Las Vegas National Qualifier is one of seven events that will determine which WTT league teams advance to the 2018 WTT Nationals, November 2-4, in Palm Desert, Calif. Eight of the nine teams from the Las Vegas event will be first-timers at the Nationals. The next National Qualifier will be July 6-8 at the Plaza Tennis Center in Kansas City, Mo.

Below is a breakdown of the action in each division. View Full Results Here

3.5 DIVISION:
Goma Tei of Kaneohe, Hawaii, advanced to their first Nationals with a victory in the 3.5 Division. Led by captain Justin McQuat, Goma Tei outlasted I‘d Hit That (Flight D) of Tustin, Calif., 28-21 in the championship match. Aceholes of Phoenix, Ariz., and High on Tennis! of Colorado Springs, Colo., finished in a tie for third place.

The 4.5 Division title went to #WhereWeEatingTonight of Corona, Calif., as captain Tina Mortensen led her squad to a 33-25 win over Finding Wemo of Phoenix, Ariz., in the championship match. #WhereWeEatingTonight was the top seed after posting a 3-0 record in round robin action then beating All Kaboobz Already of Pearl City, Hawaii, 33-26, in the semifinals.

Mature Swingers of Sandy, Utah, advanced to Nationals as the Senior 4.5 Division representative.

SENIOR 3.5 DIVISION:
Senior Grapes of Tulsa, Okla., punched their ticket to Nationals for the first time by winning the Senior 3.5 Division title. Captain Laura Bailey steered her squad to a 4-1 record in round robin action. Though runner-up Kiss My Ace of Acton, Calif., also posted a 4-1 record, Senior Grapes advanced because of their head-to-head win over Kiss My Ace, 31-23.

Two Southern California teams faced off in the Senior 4.0 Division championship, with Fire and Ice of San Diego, Calif., taking out the top-seeded Challenge This of Long Beach, Calif., 30-21. Both teams advanced to the semifinals with 3-0 round robin records. Fire and Ice was led by captain Albert Alagata.

Hawaii teams continued their strong showing by taking home the title in the Super Senior 3.5 Division. Hana Hou, led by captain Clyde Miyasato of Waipahu, Hawaii, won the division with a 4-0 round robin record. Doubles Troubles of Salt Lake City, Utah, finished second with a 2-2 mark.

Young at Heart, Old Elsewhere of Playa Vista, Calif., won the Super Senior 4.0 Division title with a 25-16 victory over Diehards of Long Beach, Calif. Both teams advanced to the finals with 3-0 records in round robin action, but Young at Heart, Old Elsewhere was too strong in the championship match with non-playing captain Dwight Liu leading the way to the team‘s returning trip to the Nationals.

The full calendar for the remaining National Qualifier events is: