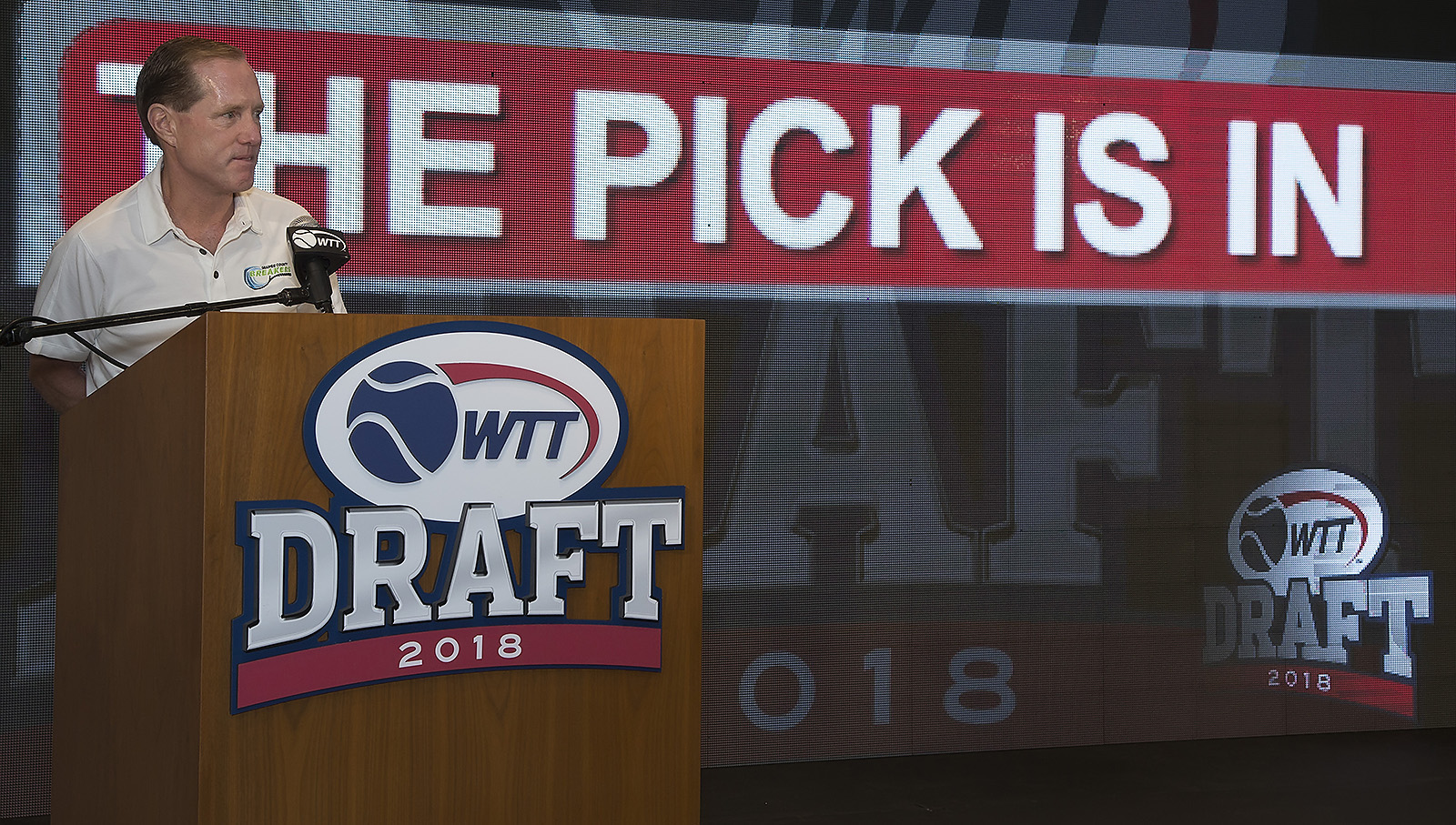 Allen Hardison, the general manager for the defending champion Orange County Breakers, said he is less concerned with rankings when it comes to the World TeamTennis Draft. In fact, the deciding factor for selecting a player isn‘t so much talent, but commitment.

The Breakers are the defending champions. The previous year, the Breakers were the runners up.

For Hardison and the rest of the Breakers brain trust, he wants to make sure they have players who want to win as much as they do.

Prior to the Draft, the staff tries to meet with the players they want to select.

“We like to talk to the players almost 100 percent of the time before the Draft to make sure, ÔÇÿDo you have two feet in the boat? Are you in it to win it? We are trying to win it, we‘re trying to get to the end of this thing. Are you going to be able to bring it every night?‘“ Hardison said. “Those are some of the things we ask the players. If they‘re one foot in, one foot out, we won‘t take a chance on them. Always having players who are willing and dedicated to playing World TeamTennis are really the players we want.

That‘s not to say the Breakers don‘t look for certain attributes to fill their rosters. One element Hardison said he looks for in players is strong servers.

In the WTT format, the winner is based on the team with the must cumulative game victories. So, a player who has a tough serve to break will likely win most of his or her games.

The longest standing owner in the league is co-founder Billie Jean King. And she takes the whole situation seriously. The day prior to the Draft, she was walking around in all black, intently focused on her phone and stalking the war room.

On Draft day, she was gathered around her table with her team of general manager Barbara Perry and coach Craig Kardon.

And from past experiences, Perry said it could be intense, especially with King.

“The first draft I did with her, I didn‘t see it coming. It‘s a different level, a different intensity,“ Perry said. “I‘d say she almost turns back into a player. It‘s very interesting to listen to her.“

For the Washington Kastles, who have won six WTT titles in the past 10 years, owner Mark Ein believes chemistry is the key. Sometimes he‘ll also talk to his players to help with personnel decisions.

One such instance this year was the selection of Nicole Melichar, a doubles specialist who is also close friends with Madison Brengle, one of the Kastles‘ protected players.

In selecting Melichar, Ein refers to a video during the tournament in Auckland a few years ago, when Brengle upset Serena Williams. Ein said the memorable video was a coach‘s visit during the match (WATCH: https://www.youtube.com/watch?time_continue=3&v=GonNHnYEPlc). It was Melichar who visited Brengle and the result was entertaining.

“Madison and Nicole are really good friends,“ Ein said. “Madison was excited to have Nicole on the team.“

SCOUT-IN-LAW: The Orange County Breakers have quite the brain trust, starting with coach Rick Leach, a former ATP No. 1 doubles player and the son of USC‘s legendary coach Dick Leach.

But there‘s another person in the family that Leach can turn to, sister-in-law Lindsay Davenport, the Hall of Famer and former No. 1 player on the WTA Tour. Davenport is a coach to US Open finalist Madison Keys, but it‘s her work as a commentator on the Tennis Channel that‘s been most valuable to the Breakers, according to general manager Allen Hardison.

“Sometimes she‘s in the booth and she‘s texting us back and giving us recommendations on players,“ Hardison said of Davenport, who is also a former Breakers star. “We‘ll pass stuff by Lindsay and she‘ll give us recommendations.“

THE GAMBLE: Last year, it could be argued the Philadelphia Freedoms took the biggest risk at the draft.

While still on the sidelines, Sloane Stephens was selected by the Freedoms. Stephens was projected to continue being sidelined for about three more months and wouldn‘t start playing until weeks before the season.

When Freedoms‘ Vice President and General Manager Barbara Perry met Stephens at the draft, she might have had doubts from what she saw.

“When I first met Sloane here last year, she had a huge brace on her leg. ÔÇÿOK, this is our girl,‘“ Perry joked. “That was kind of interesting. But she was very positive about her plan coming back.“

Stephens returned right on schedule. But working off the rust was another story.

It wasn‘t a pick that lead the team to a title, but Perry and the franchise was still happy with what they saw from Stephens.

“She wasn‘t at the top of her game and she had to get used to the format. But she was a trooper. She hung in there. She practiced a lot with the team and then by herself. She really wanted to play a lot of tennis,“ Perry said. “At the same time, we didn‘t question the decision because she is a great player. A little bit of it, you‘re betting on the future.“

But thanks to the matches, Stephens did get her game back in shape quickly. Later in the fall, she came from nowhere to win the US Open, her first Grand Slam title, beating Madison Keys, a former star for the Freedoms.

“We didn‘t expect her to come out of the gate going gangbusters because she played so few matches. But we‘re really proud of the fact she ended up where she did with the US Open. It makes us really proud she was on the team and hopefully we helped her get back into top shape,“ Perry said.

“Billie Jean always says that WTT tennis is the best practice and training players can get, and very often they have success when they leave.“

SECRET WEAPON: Moms are known for their ability to multitask and handle almost any situation. With that in mind, the New York Empire will lean on that strength through two WTT rookies, Tatjana Maria and Maria Jose Martinez Sanchez.

Maria and Martinez Sanchez are two of the WTA‘s touring moms, with each giving birth to daughters in late 2013. Perhaps a new women‘s doubles team will be formed this summer. And let‘s not forget fellow mom Gigi Fernandez, who returns for her second year at the helm in New York.

EAGLES DISTRACTION: Living in Philadelphia last month made things difficult for Perry‘s professional life. The Eagles upset the New England Patriots in the Super Bowl to give Philly it‘s first title, and the celebrations have been constant.

“It was crazy. It‘s been crazy. I think I lost at least a month of getting a lot of work done. Meetings were cancelled. I was like, really? Then they had the parade and it knocked out that whole week,“ Perry said.

Perry attended a Villanova game, and said it was a raucous crowd.

“In the second half, they introduced these two Eagles sitting courtside and the level of the cheering went up. It was crazy,“ Perry said. “I said, ÔÇÿWe got to get these guys.‘“

Perry said the Freedom works with the other professional franchises and tries to bring out the local players.

KASTLES ANALYTICS: On Friday, World Team Tennis announced a partnership with Universal Tennis Ratings as its official rating system. And WTT match results will count towards a player‘s UTR result.

UTR Powered by Oracle is a proprietary algorithm-based rating system that provides a single unifying language and standard for tennis players across age, geography, gender and economics. Three factors go into the rating: competition (i.e., the strength of opponent), the score (based on percentage of games won during the match) and recent history (last 30 matches played over 12 months). The ratings range from 1.00 for beginners to 16.50 for the pros, with males and females measured on the same scale.

FOOTBALL PLAYER AS GM: Allen Hardison, the general manager for the Orange County Breakers, is an athlete himself. He was a college kicker for UNLV and Nevada-Reno. While at Reno, he was there at the same time as former San Francisco 49ers quarterback Colin Kaepernick.