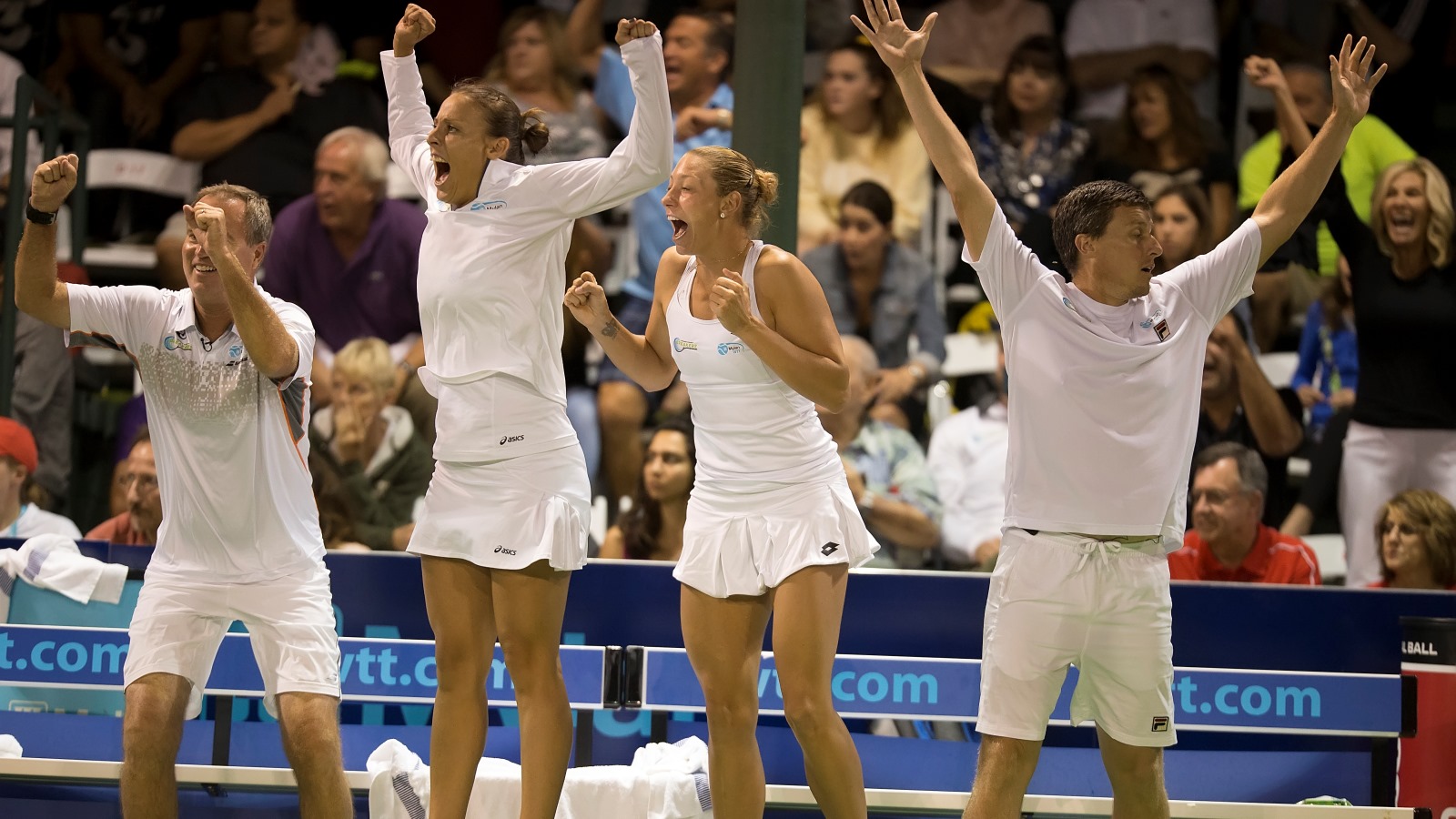 The Orange County Breakers captured their second Mylan World TeamTennis championship title with a 22-18 victory over the San Diego Aviators in front of a capacity Southern California crowd at Omni La Costa Resort & Spa in Carlsbad, Calif., on Saturday night.

This year‘s match was a rematch of the 2016 championship tilt which was won by San Diego. One year later, Orange County flipped the script for their first title since 2004.

The win came one day after the league announced that the Breakers made history by sweeping all five award categories. Teymur Gabashvili, who was named the Male MVP for his regular season performance, lived up to his MVP billing in the final as well. After his teammates handed him a 17-14 lead heading into the final set, Gabashvili battled San Diego‘s Rajeev Ram in men‘s singles. Gabashvili was solid on serve, winning 79 percent of his first-serve points en route to the 5-4 set win to give Orange County the 22-18 victory.

Gabashvili was also named the Mylan WTT Finals MVP presented by Forevermark for his performance. Gabashvili, who was presented with a Forevermark diamond after the match, posted wins in both men‘s doubles and men‘s singles.

“It was so tight, everything was shaking,“ Gabashvili said of his nerves after the match. “It‘s only three to four shots that can make a difference. I was glad I could close it out.“

The night opened with a hard-hitting matchup between 2017 Female Rookie of the Year Yanina Wickmayer and San Diego‘s Naomi Broady in women‘s singles. Wickmayer and Broady traded service holds to open the night. Wickmayer turned the tide when she broke Broady‘s serve with a blistering forehand winner in the sixth game to take a 4-2 lead. Wickmayer held serve to close out the set 5-2. “I had to wait for my time to be aggressive and really go for my shots,“ said Wickmayer. “I think I did that well. I moved her around and went for my shot when I had the opportunity.“

Wickmayer gave a nod to the atmosphere at the Finals and the large contingent of Breakers fans who made the drive from Orange County. “It’s my first year and it has been crazy every single night,“ said Wickmayer. “But this atmosphere is sick. I am super nervous but really enjoying it.“

Wickmayer and 2017 Mylan WTT Female MVP Andreja Klepac finished the regular season as the top-ranked women‘s doubles team while the Aviators finished in sixth position. However it was San Diego that dominated the set tonight. Wickmayer nailed a forehand down the line for a clean winner to break Jurak‘s serve and go up 2-1, but the Aviators got the break back in the next game when Klepac netted a backhand volley. San Diego kept up the pressure, taking a 4-3 lead when Klepac netted a backhand volley. Wickmayer missed a forehand volley to give the Aviators a break point and San Diego capitalized to take the second set 5-3 and move within one game in the overall score, 8-7.

Men‘s doubles featured both the 2017 Male MVP Gabashvili and Male Rookie of the Year Ken Skupski against one of the top ATP Tour doubles tandems in Rajeev Ram and Raven Klaasen. It was Gabashvili and Skupski who put on a show, saving all seven break points they faced and winning the set on an incredible backhand volley from Skupski. Gabashvili credited his partner with pulling away from San Diego in the set. “On that [final] deciding point, I was like, ‘please let him play the ball in.’ He did like the best job I’ve ever seen. Unbelievable. All credit to him.“

The shot-making in mixed doubles was equally as impressive as the Aviators‘ Klaasen and Jurak edged out Klepac and Skupski 5-4. That pulled the Aviators to within three games but that‘s as close as the defending champions would get to closing the gap. Gabashvili and Ram held serve in every game before the Russian prevailed in a tiebreak.

The victory was extra special for Breakers coach Rick Leach, who was named the 2017 Coach of the Year but has been on the losing side of the past two championship matches. “A lot of people don’t realize that the last time the Breakers won the title, my dad was the coach,“ said Leach. “It’s means a lot to me. I’ve lost in the Finals three times as a coach. It’s so difficult to win the King Trophy and very tough to win on the road. I’m proud of the way the team fought and came together at the right time. They all had to play their best to win, and they did.“

OFF THE COURT: The match included a halftime interview with WTT co-founder Billie Jean King and actor Austin Stowell who plays her former husband Larry King in the upcoming film Battle of the Sexes.