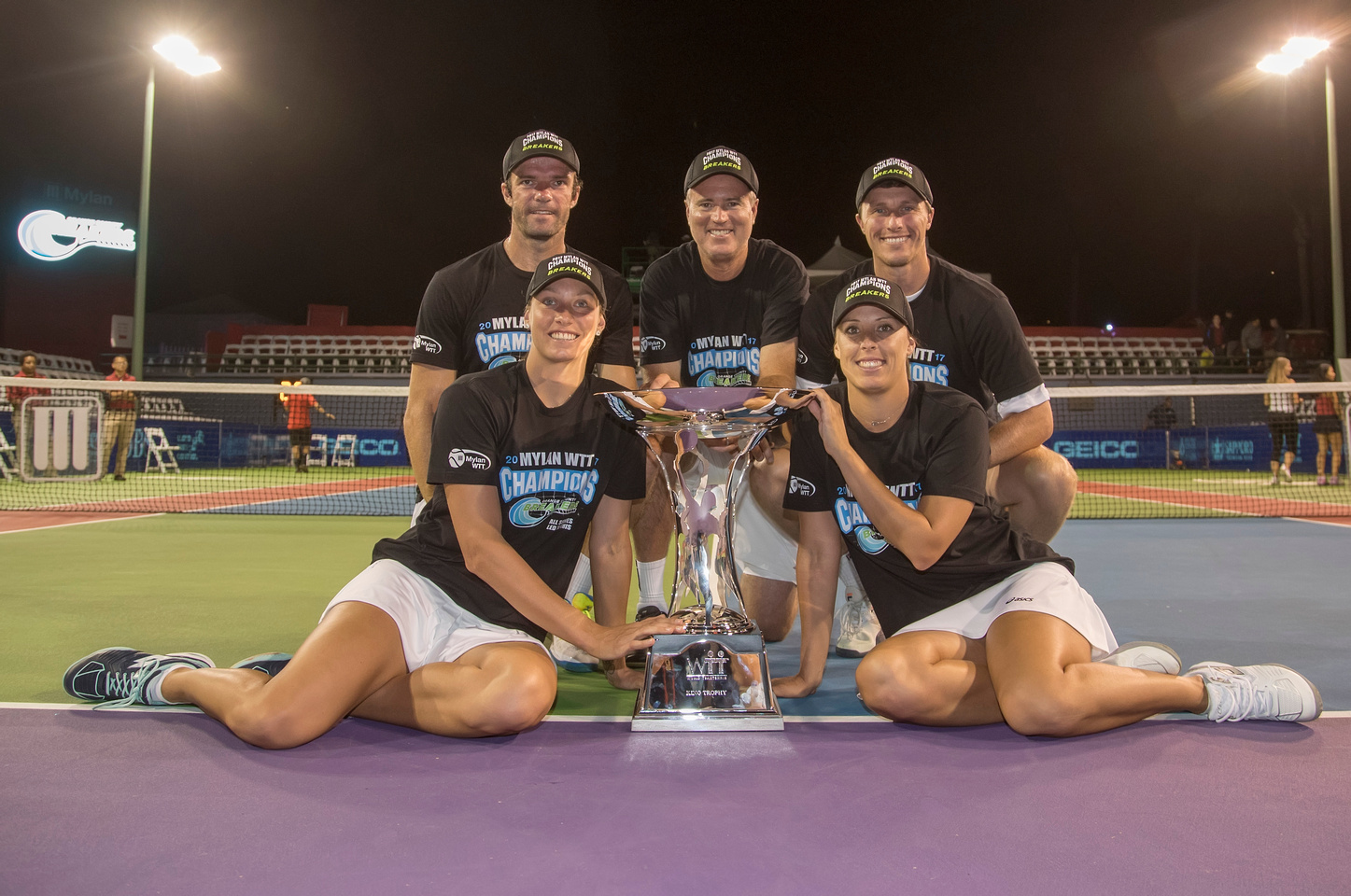 It seemed only fitting that Teymuraz Gabashvili of the Breakers would end a thrilling Mylan World TeamTennis championship match against the San Diego Aviators late Saturday night.

The night before, Gabashvili was named the Mylan WTT Male MVP. He played like one on Saturday night. He closed things out 5-4 in men’s singles to help give the Breakers a 22-18 victory over the defending champions on their home court at Omni La Costa Resort & Spa in front of a capacity crowd.

Truth be told, the Breakers used a total team effort to overwhelm the Aviators, who were backed by their home crowd. It was a rematch of last year’s Mylan WTT Finals, and it was the Breakers’ franchise third straight year in the championship match, as they also lost in 2015 when they were from Austin. The Breakers captured their first WTT championship since 2004 when they were the Newport Beach Breakers.

Ken Skupski, the WTT Male Rookie of the Year, shined just as much as Gabashvilli, as he was a key figure in the Breakers’ pivotal men’s doubles win, 5-2, that gave the Breakers a 13-9 lead through three sets.

“I wasn’t expecting it,” Breakers coach and WTT Coach of the Year Rick Leach said of the men’s doubles win over Rajeev Ram and Raven Klaasen. “They are one of the top teams in the world. On paper we had no business winning that set. Our guys rose to the occasion. I’m just so happy with the way the team improved, came together and fought hard. And that’s what it takes in World TeamTennis to win. You all have to come together at the same time.”

Gabashvili was certainly on his game. He was also named the Mylan WTT Finals MVP.

“This was quality-wise one of the best matches overall in World TeamTennis,” Gabashvili said. “Every set was huge quality. It was so tight. I want to thank Yanina (Wickmayer) personally. She came through, nobody knows but she improved so much and today she played great tennis. We were so happy she gave us that lead. We maintained and finished it. Without her we could not make it possible.”

The San Diego Aviators (9-6) received plenty of love from the home crowd. But the Breakers (10-5) set the order of play in the match because they finished with the league’s best record (as a result of winning a games won tiebreaker over the Aviators). They were undefeated at home with seven wins and won twice on the road during the regular season.

Wickmayer, named the WTT Female Rookie of the Year, started things out right for the Breakers with a 5-2 win.

But the Aviators answered right back in women’s doubles, as Naomi Broady and Darija Jurak scored a 5-3 victory. It was definitely a tight match. The teams split in the four matches they played during the regular season, each team winning at home.

Then came the huge men’s doubles win by Skupski and Gabashvili.

However, Klaasen and Jurak edged Andreja Klepac and Skupski, 5-4 (3) in mixed doubles. The Breakers held a 17-14 lead going into men’s singles.

“We all had to play our best,” Leach said. “I felt very confident with Teymuraz at the end. That’s why we set that up.”

The victory was special for Leach.

“I’ve been a part of a winning team as a player,” he said. “As a coach, this is three times in the finals. This means so much to me as a coach.”

TURNING POINT: Ken Skupski and Teymuraz Gabashvili teamed up in men’s doubles to score a 5-2 victory over Rajeev Ram and Raven Klaasen. The win gave the Breakers a 13-9 lead with two sets remaining. Skupski ended the men’s doubles set with an amazing shot.