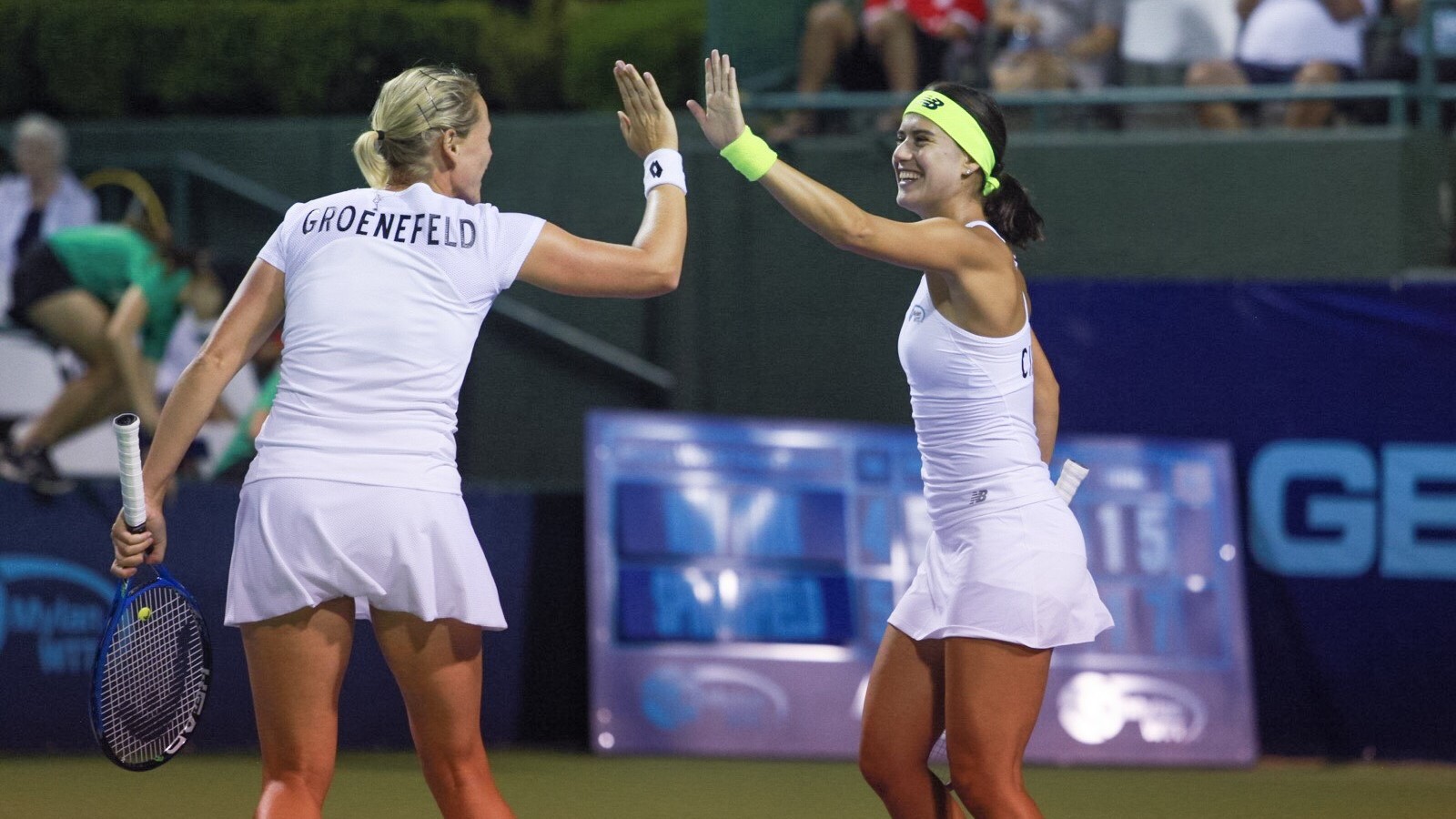 Springfield coach JL de Jager knew just the right thing to say to Sorana Cirstea before her 13-point Supertiebreaker against Kirsten Flipkens Aug. 2, and it had nothing to do with tennis.

Those magic words worked as Cirstea, after dropping the women‘s singles set 5-2, rallied from a 1-4 deficit to win the supertiebreaker 7-5 and give the Lasers a 21-20, season-ending win over the New York Empire at Mediacom Stadium.

“I was trying to get everything together and focus on every point, because I knew it was going to go very quick,“ Cirstea, still smiling, said. “The surface is unbelievably fast, so I had to be ready every single point and try to win my serves.“

She won enough of them to get the job done. Flipkens, meanwhile, put a return shot into the net and then double-faulted to give away the final two points.

“That was good for (Cirstea),“ de Jager said. “She did great tonight, but everyone was great. Anna-Lena Groenefeld did great in doubles, Benjamin Becker was great in singles all year and Nik Scholtz played really well tonight.“

The Lasers took control of a tough match in women‘s doubles, the fourth set of the night. Cirstea teamed up with Groenefeld for a dominating 5-1 win that included a first-game break of Flipkens and a third-game break of Maria Sanchez for a 3-1 lead at the changeover. A second break of Flipkens set the table for Cirstea to hold serve and clinch the win.

“That was a tough women‘s doubles, but Flipkens did a great job coming back from that,“ New York coach Gigi Fernandez said.

It was a razor‘s edge separating the teams in the first half, as all three sets went to a tiebreak. First was men‘s singles, as Springfield‘s Benjamin Becker and New York‘s Michael Willis both held serve, but Becker won four straight points ÔÇô including an ace ÔÇô in the tiebreaker to take the set 5-4 and give the Lasers the early lead.

Mixed doubles featured a pair of service breaks, as the Empire took a 4-2 edge. But a break of Flipkens got Springfield back into the set and Groenefeld held serve to force the tiebreaker. New York pulled off the big run this time around, winning four points in a row for a 5-4 triumph that evened the overall score at 9.

The Empire took a 14-13 lead at the half thanks to another tiebreak win, this time in men‘s doubles. A game of holds ended with Neal Skupski serving back-to-back points to claim the set.

The win wraps up a season full of changes for the Lasers, who lost Daria Kasatkina to injury before the season even began, with a record of 7-7. Eight different players suited up for Springfield ÔÇô nine if you include marquee player Jack Sock.

“A lot of these players, it was their first time playing World TeamTennis,“ de Jager said. “They played one or two matches, then ÔÇô just as they were getting used to it ÔÇô they were out. That was tough, but we had a great team. They‘re great players, but they‘re awesome people and that‘s what matters to me.“

The short-timers on the roster included Scholtz, who went pro after wrapping up his collegiate career at Ole Miss in 2015. He played the final three matches of the season.

“I was skeptical of it at first, but man am I going to market the hell out of it now with my friends and fellow players,“ Scholtz said. “It was a great time. It‘s fun to be part of a team again. And you get a chance to improve on adjusting to different surfaces and different venues. And every point matters. If you‘re down 4-1, if you can just get it to 4-2, that can make a difference if the team wins or loses.“

New York, meanwhile, ends its season outside of the Mylan WTT Finals, but with a record of 7-7.

“This was a very satisfying match for us. We were trying to win enough games to get into third position and we did it,“ Fernandez, in her first year coach Mylan WTT said. “I loved it. It was good to coach again and be on the sidelines, being nervous. I hope to do it again next year.“

TURNING POINT: Springfield‘s Sorana Cirstea had been struggling with her serve, getting broken twice in women‘s singles and splitting her first two serves in the supertiebreaker. But she served two straight points to even the score at 5 and set the table for her thrilling, match-clinching 7-5 win over Kirsten Flipkens.