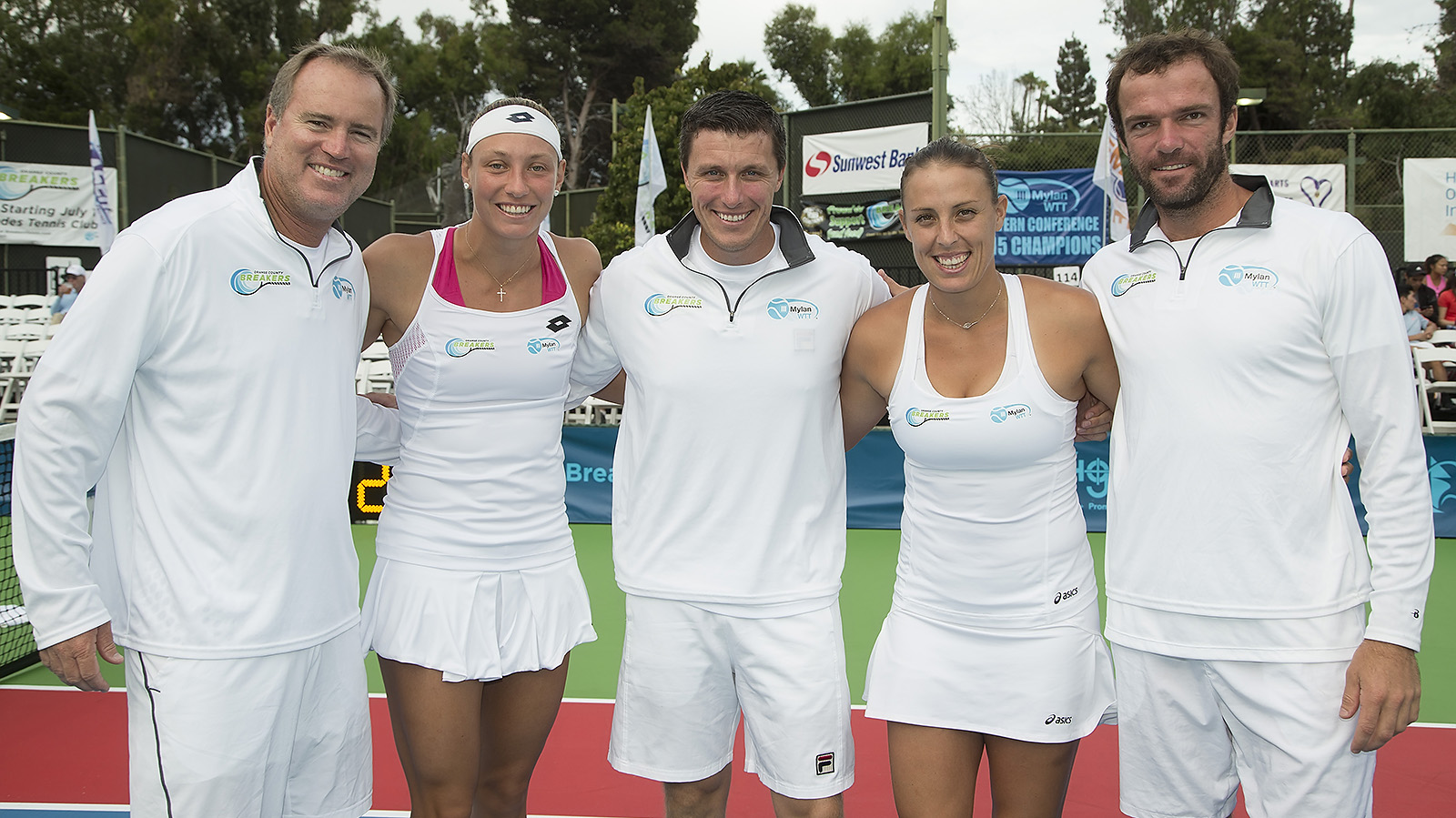 The Breakers once again used their home-court advantage to take down the Washington Kastles, 23-14, at the Palisades Tennis Club in Newport Beach. As a result of the San Diego Aviators topping the Philadelphia Freedoms 21-18 later in the evening, the Breakers became the first team to clinch a spot in Saturday’s Mylan WTT Finals. Orange County can secure the top seed on Wednesday with a win against Philadelphia, or if the Aviators lose to the Kastles.

The Breakers haven‘t lost at home this season, winning six matches. They were at it again against the Kastles even though Yanina Wickmayer dropped the opening set of women‘s singles.

Madison Brengle earned a hard-fought 5-4 (4) tiebreaker win over Wickmayer. But Wickmayer and Andreja Klepac responded with a 5-1 victory in women‘s doubles against Brengle and Anastasia Rodionova.

That set the stage for a huge 5-1 men‘s doubles win by the Breakers‘ Teymuraz Gabashvili and Ken Skupski.

“I thought tonight was a really tough match for us because everyone is tired,“ Breakers coach Rick Leach said. “It‘s the end of the season. They really dug deep to win this match. I think we‘re in good shape now. I don‘t know about mathematical equations but at least we control our own destiny if we win (Wednesday).“

The Breakers frustrated Sam Groth and Robert Lindstedt to the point that Groth broke his racquet after the Breakers broke his serve to go up, 2-0, in the men‘s doubles set.

“Ken played unbelievable in men‘s doubles,“ Leach said. “That return at 4-1 was huge. To win two sets 5-1 that puts you in the driver‘s seat. We‘re getting better and better each match. It‘s a good time to be peaking.“

Leach said Gabashvili stepped up as a great anchor for the Breakers. He beat Groth, 5-2, to close out the match.

“We had really tight match in Philadelphia, Supertiebreaker (loss),“ Gabashvili said. “But the conditions away are completely different and I think it‘s favorable for us. I hope its‘s going to help. Let‘s see how it goes.“

NEXT ON: The Breakers will finish the regular season at home against the Philadelphia Freedoms Wednesday at 6:05 p.m. A victory will see the Breakers claim the top seed at the Mylan WTT Finals, which would enable the team to set the order of play in the championship match. Follow results on WTT.com/livescores or www.breakerstennis.com.