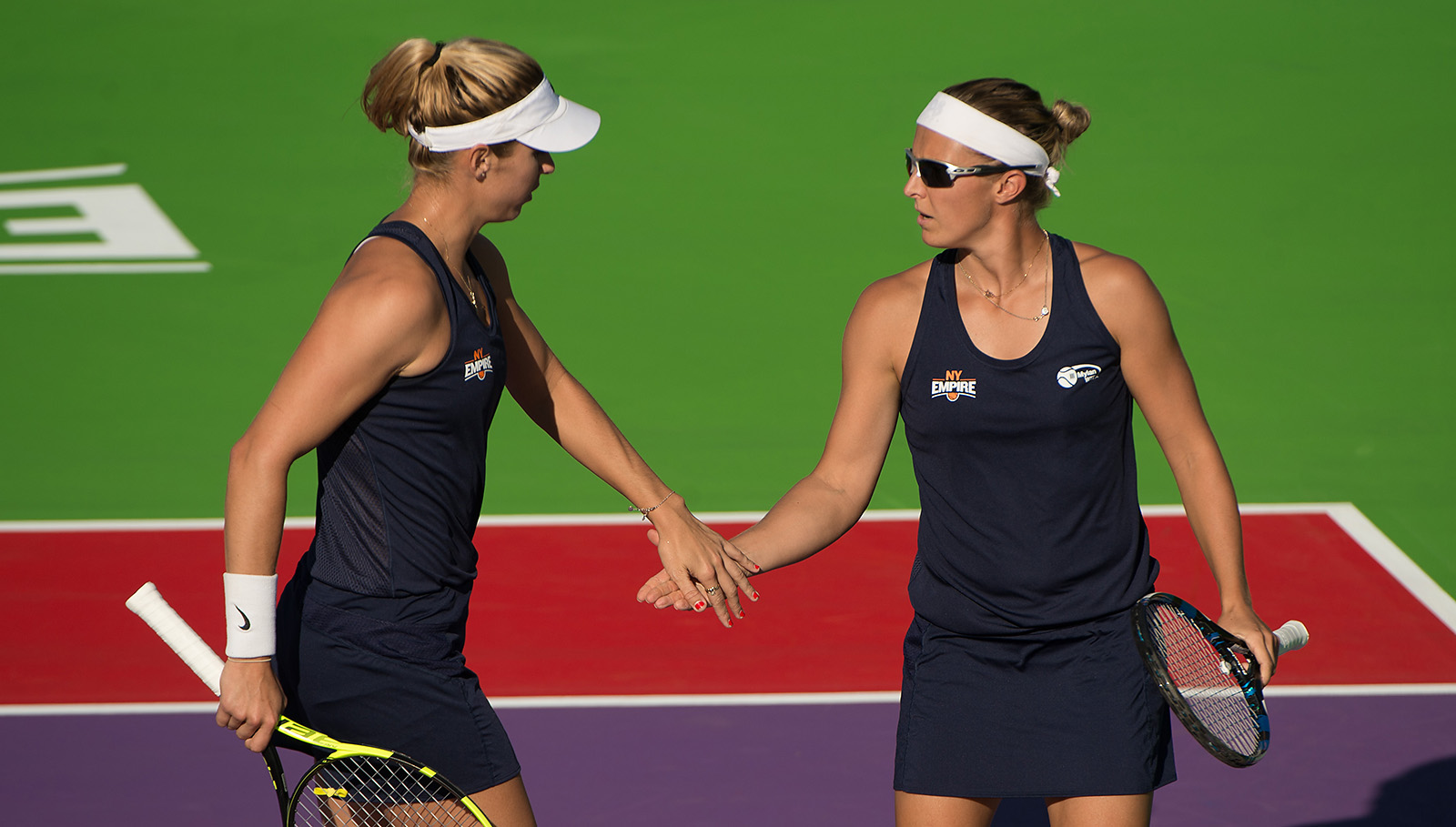 Kirsten Flipkens knew she‘d have to step up to the plate on Sunday night for the New York Empire in the absence of head coach Gigi Fernandez ÔÇö and in front of the home crowd, the Belgian hit an ace.

Competing as a playing coach for the Empire in its penultimate home match of the season, Flipkens went undefeated in three events for the home team, and New York swept all five en route to defeating the Washington Kastles, 25-18.

“It couldn‘t be better,“ Flipkens said of her coaching debut. “We won all five sets so I‘m happy as a player and a coach. It was great fun, I think we did a good job ÔÇö we started off well, winning men‘s doubles, then women‘s doubles, so that made it a little bit easier.

“I knew the day before yesterday that [Gigi Fernandez] wasn‘t going to be here, so I think it worked out well. As I‘m the oldest of the team, I had to take the lead there.“

The 31-year-old Belgian called her first GEICO Timeout as a coach in the opening set, as she helped talk her men‘s doubles team of Neal Skupski and Marcus Willis through to a tiebreak victory. The opening set came down to a deciding point in the tiebreak, on which Skupski hit a perfectly measured lob over the Kastles‘ Bruno Soares and Sam Groth, which wrapped up the first set for the home team.

She then took the court in three straight events, beginning with a 5-3 win alongside Maria Sanchez over Madison Brengle and Anastasia Rodionova, where the duo broke in the fifth game and dropped just two points on serve in the set. She followed that up with a tiebreak victory alongside Neal Skupski in mixed over Soares and Rodionova, and kept her momentum going out of halftime with a 5-3 win in singles over Brengle.

Against the big-serving Groth, Willis needed to win a deciding tiebreak to hold off Extended Play, and did so in style to wrap up the sweep in his first match in New York for the Empire this season.

But Sunday was all about Flipkens ÔÇö and as her first season in Mylan World TeamTennis nears the end, the Belgian has played a big part in a successful campaign for the Empire. With two matches left in the season, New York still has a chance to qualify for the Mylan WTT Finals ÔÇö a far cry from the two-win season the team posted a year ago.

“It‘s great, I love it,“ Flipkens reflected. “It‘s nice to be in a team, and getting to know a lot of new players. I love the format, it‘s great to be a part of this and to be into a little bit of Billie Jean King‘s philosophy of tennis ÔÇö the equality and everything, I love it.“

TURNING POINT: In a match where the Empire won all five sets, the team was nearly untouchable on serve ÔÇö serving a combined 70 percent, and winning 86 percent of the points played on first serves. In total, the Empire struck 15 aces in the match, and lost serve just once across the five events.

UP NEXT: The New York Empire close out the home portion of its 2017 Mylan WTT schedule on Monday against the Springfield Lasers at 7 pm ET on Court 17 at the USTA Billie Jean King National Tennis Center.