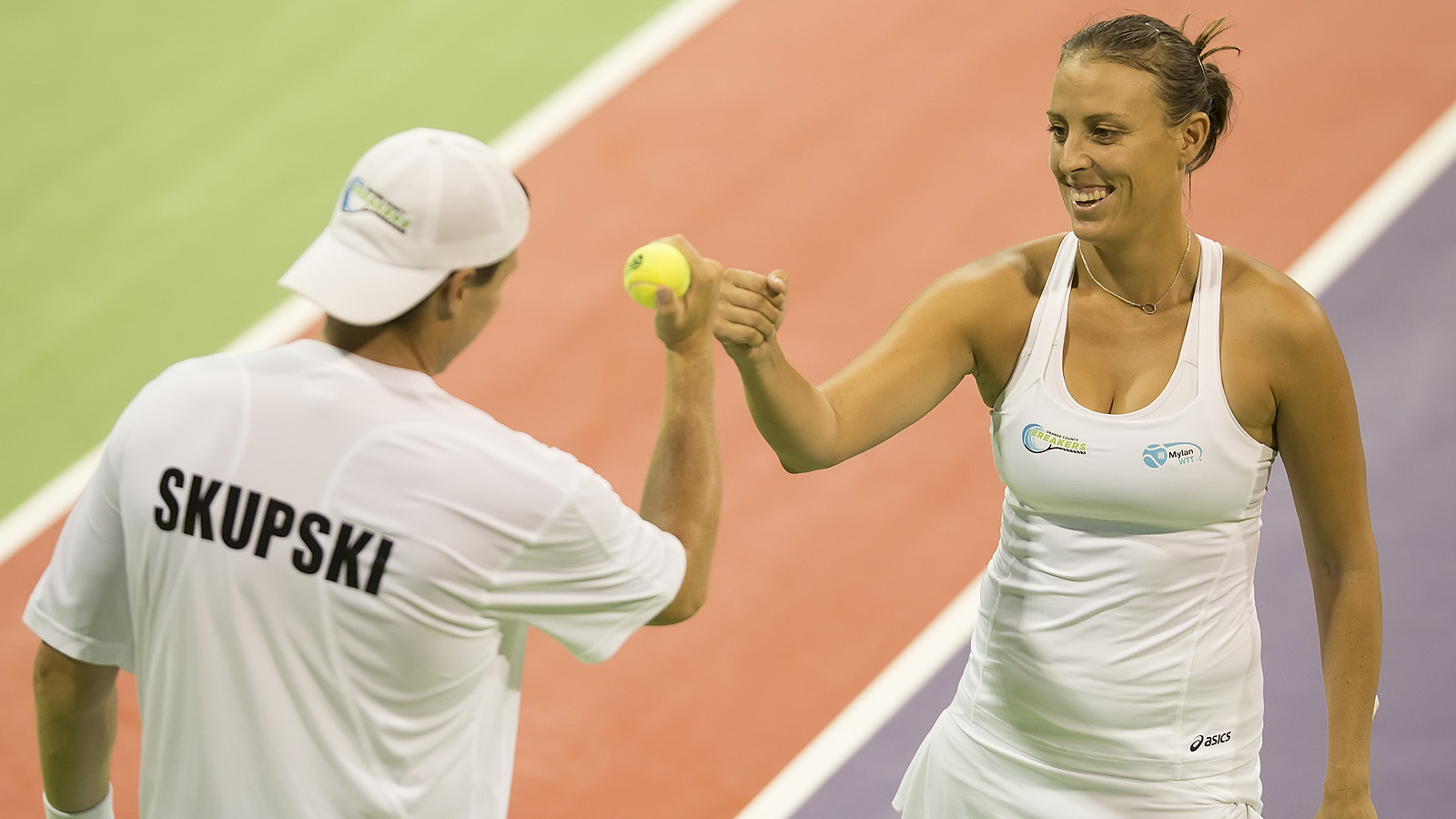 The Washington Kastles‘ home schedule ended tonight with a dispiriting 24-14 loss to the Orange County Breakers. After a torrid start at Kastles Stadium at the Smith Center last week, which saw them win their first three home matches, the Kastles see their home record end the season at 3-4 (4-7 overall).

The bright spot in the match for the Kastles came in the women‘s doubles, which has been a typically strong discipline for Washington throughout the season. Neither team was broken en route to the tiebreak, where the tandem of Anastasia Rodionova and Madison Brengle cruised, 5-1. The Kastles took the first two points on Yanina Wickmayer‘s serve with a Rodionova backhand winner and a Brengle lob, respectively, and never looked back, clinching the set with a Brengle winner off of the serve of Andreja Klepac.

“We know how important it is in World TeamTennis to win every game,“ Rodionova commented after the match, “so we just go out there and try our best for every point, for every game, and it worked in the women‘s doubles today.“ Rodionova credited Brengle‘s strong backhand for helping to close out that set, and the quintessential team player pointed to her partners all season — not only Brengle, but also Venus Williams and Martina Hingis — as to why she‘s been one of the league‘s top performer in women‘s doubles. “Having a great teammate with me on the same side definitely helps a lot,“ she said with a smile.

Before that, though, Washington found themselves in a hole, dropping the opening mixed doubles. Rodionova had her serve broken twice, and she and partner Bruno Soares were unable to find any openings in the service games of Klepac and Ken Skupski. The 5-2 lead for Orange County after the mixed was only slightly ameliorated by the women‘s doubles, and the Breakers found themselves up 9-7 going into the men‘s doubles.

Orange County won the next two sets with relative ease. Skupski and Teymuraz Gabashvili dominated in the men‘s doubles, breaking Soares and Vasek Pospisil in each of their opening service games. The Breakers prevailed 5-1, and held a 14-8 lead after three sets.

Wickmayer, meanwhile, used her powerful forehand to exact revenge on Brengle, who had out-hustled the Belgian in their previous meeting in Washington. After consecutive breaks, Brengle found herself serving down triple break point at 2-3. Two errors by Wickmayer kept Brengle in the game, but at deciding point, Wickmayer bludgeoned a forehand return down the line, and the women‘s singles went to Orange County, 5-2.

Pospisil then had to come on court with the daunting task of keeping Washington in the match despite being behind 19-10. “I knew it was going to be a big mountain to climb,“ said the Mylan WTT rookie, “because Teymuraz was playing tough, serving great — even in doubles he was on fire.“

The Canadian was quickly broken by Gabashvili in his first service game, but he broke back for 2-2 thanks to an awkward return of a let serve that Gabashvili then pushed into the net. “My best shots were letting me down — my forehand and my serve,“ Pospisil said after the match. “But I gave myself a chance to win because of my competitiveness…I was competing well and I was moving well.“

It was not enough to have Washington come all the way back, though, as once the set progressed to a tiebreak, the Russian raced to a 4-0 lead. An ace by Pospisil only prolonged the inevitable, and Gabashvili calmly closed out the tiebreak 5-1, giving Orange County the match and pushing their season record over .500 (6-5).

TURNING POINT: In men‘s doubles, Vasek Pospisil, playing his first-ever home match for the Kastles, was able to hold serve for 1-4 and prevent the bagel, and he and Soares found themselves with three chances to break Gabashvili in the following game. But the Breakers were able to erase those break points, and took the game with a successful lob by Gabashvili, creating an insurmountable lead for the Orange County squad.

NEXT ON: The Kastles end their season with three away matches, starting tomorrow, Sunday, July 30th, with their rubber match against the New York Empire. Follow results on WTT.com/livescores or washingtonkastles.com.