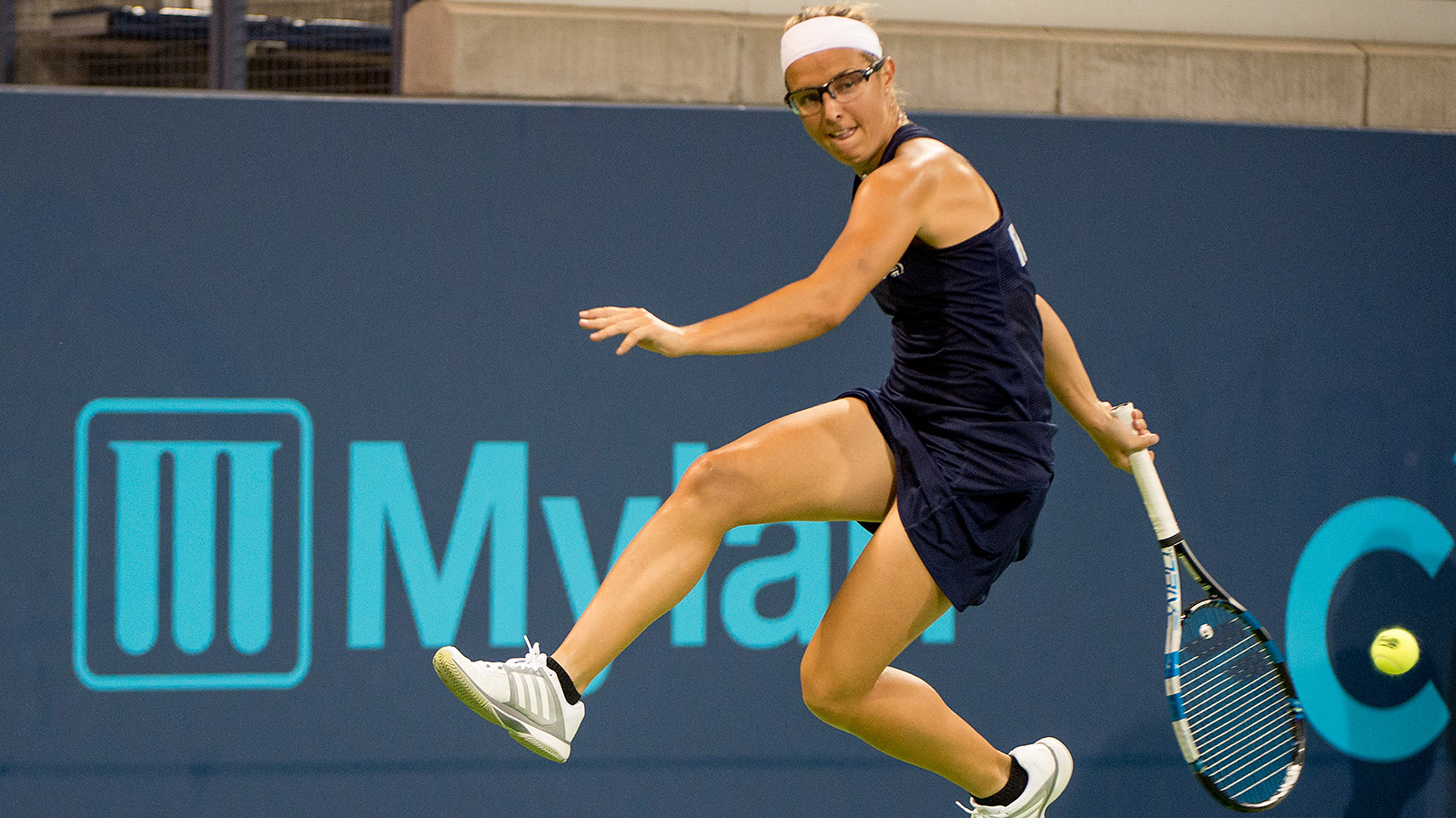 For the second night in a row, a valiant Washington Kastles comeback was thwarted at the very end, as Mardy Fish claimed a match-ending Supertiebreaker over Sam Querrey to give his New York Empire a 20-19 win at Kastles Stadium at Smith Center.

The Kastles started strongly, as their mixed doubles team of Bruno Soares and Anastasia Rodionova won the first set over New York‘s Kirsten Flipkens and Neal Skupski. The teams held serve through the first seven games before Flipkens was broken at love, punctuated by a game-ending Rodionova volley winner, and putting Washington ahead 5-3 after the opener.

But the Empire quickly turned things around in the women‘s doubles, when Flipkens and Maria Sanchez raced out to a 4-0 lead. The Belgian/American tandem left Rodionova and Madison Brengle off-balance with their aggressive tactics and successful smashes, and held on for the set 5-2, moving their team ahead by one point after two sets.

Washington‘s Soares and Sam Querrey tried to get things back on level ground, coming back from a break down to push the men‘s doubles into a tiebreak. But a pivotal point on Fish‘s serve in the tiebreak, where he hit three overheads before he could penetrate the Kastles‘ defense, gave the Empire the confidence they needed to win the final three points of the tiebreak and close out the set.

Brengle had an easy set against Flipkens in their previous women‘s singles set this season, and with the home team down 11-13 after three sets, the Delaware native needed to repeat her performance to get back in the match with the Empire. Flipkens, however, utilized her all-court game to exact revenge on Brengle, executing slice backhands with ease and deploying the drop shot to great success. When a crosscourt rally on set point was blown apart by another drop shot by the Belgian, Brengle could only watch helplessly as the Empire took the fourth set and extended their match lead to four games.

Querrey, however, dominated Fish in the final set of the evening, including a break for 2-0 which came courtesy of a forehand winner after Fish tracked down a lob and put it back in play via a tweener. Querrey finished the set 5-1, and after five sets, the score was knotted at 19-19.

But in the Supertiebreaker, Fish drew first blood as Querrey dumped a volley into the net on the opening point, and despite following that up with an unreturnable serve, Fish was in complete control. Once Querrey lost his next service point to a down-the-line forehand winner, giving New York a 4-1 lead, Fish could not be caught. Despite his impressive play in the final set, Querrey was no match for Fish in the Supertiebreaker, and when Fish won his sixth point in a row with a wide backhand by Querrey, the Empire officially avenged their first-week loss at Washington.

Nevertheless, the Kastles players were optimistic after their second consecutive close loss. Despite not being able to pull the matches all the way back, Querrey is pleased with his form over the two-night home stand. “I‘m hitting the ball really solid,“ said the 2017 Wimbledon semifinalist, “and that‘s what I care about the most.“ And Soares was upbeat even after the last two losses which he termed “unfortunate.“ The Brazilian doubles star noted that the Kastles “still have a couple more [matches] to go, and hopefully we can make it to the Finals.“

TURNING POINT: After losing the opening set, Maria Sanchez and Kirsten Flipkens played tremendous doubles, clinching the final game of the set with multiple volley winners by Flipkens, a former Wimbledon semifinalist. This gave them the edge going into the final three sets and were crucial games leading to their Supertiebreaker victory.

NEXT ON: On Friday, the Kastles travel back to Springfield for their third match of the season against the Lasers — and Washington is hoping for their first win in the series. Follow results on WTT.com/livescores or washingtonkastles.com.