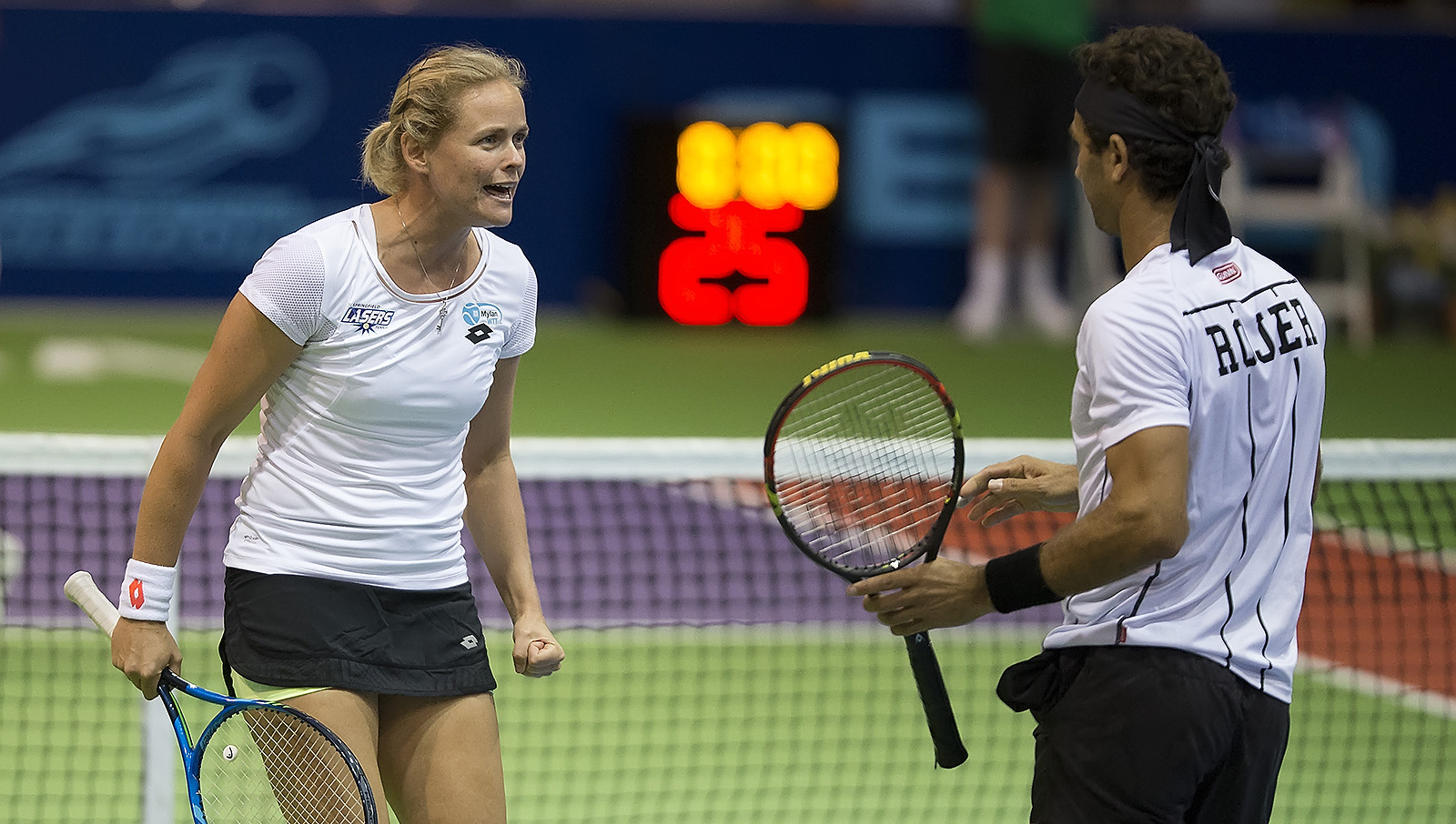 In a Wednesday matinee at Hagan Arena on the campus of St. Joseph‘s University, the Springfield Lasers certainly performed well in pressure point situations to push past the host Philadelphia Freedoms 22-18 in Extended Play.

World TeamTennis features no-ad scoring, which means the first to win four points in a game wins the game. When a game reaches 3-all, it is a deciding point. In this match, 13 games were decided by 3-all points with Springfield walking away with nine.

“If you look at our statistics we lost more (pressure points) than we won so obviously the big points can change the outcome a lot, said Springfield‘s Benjamin Becker, who won 2 of 3 3-all points. “We won them today and we won the most important points yesterday (in their win over Washington). That‘s how you win in World TeamTennis.“

Philadelphia Freedoms coach Craig Kardon said, “We lost too many 3-all points. It was sloppy play. We would get ahead and we didn‘t close the deal. In the first match (women‘s singles), we lost three of four. Darian (King) lost three in his singles match. You get 13 opportunities and we lost nine. That‘s a change of nine games. That‘s a lot.“

The Lasers built an early cushion due in large part to success on 3-all points. In the opening set, Springfield‘s Sorana Cirstea had four opportunities and won three of them to propel herself to a 5-1 win over Sloane Stephens.

Despite their struggles with the 3-all points, the Freedoms refused to go away and used the “Every Game Counts“ mentality to their advantage. Trailing 9-6 heading into the men‘s doubles event, King and Fabrice Martin did all they could to keep their team in the match. Holding a 4-3 lead, Martin and King played near perfect game that ended with King splitting the Springfield duo of Becker and Jean-Julien Rojer for a winner that gave Philadelphia the break and set, 5-3. The win sliced Springfield‘s overall lead to just one game at 12-11.

Becker would give Springfield a 17-13 lead following his 5-2 win over King in a set that saw Becker win two important 3-all points. As they have done the past couple of nights, the Freedoms had to send the Mixed Doubles pair of Martin and Taylor Townsend out for the final set with hopes of bringing their back.

Living up to their status as the top-ranked duo amongst the league leaders, Townsend and Martin emerged with a 5-4 tiebreak win over Rojer and Anna-Lena Groenefeld to cut the deficit to 21-18 and force Extended Play.

“Taylor and Fabrice have been playing great tennis under a tremendous amount of pressure with the possibility of winning,“ said Kardon. “The emotion was high and we need to keep moving forward. My confidence is still high with this team and I am confident we can have a strong finish.“

In the opening game of Extended Play, the Freedoms forced a 3-all point, but were denied by the Lasers to end the match.

“It wasn‘t the best schedule for us,“ said Becker, referring to the short turnaround from last night. “We had a great win last night and wanted to follow it up today.“

TURNING POINT: Springfield‘s success throughout the day on 3-all points. The Lasers win nine of 13 3-all points.

NEXT ON: The Freedoms will host the Orange County Breakers at Hagan Arena on the campus of St. Joseph‘s University on Friday, July 28 at 7PM. Follow results on WTT.com/livescores or www.philadelphiafreedoms.com.