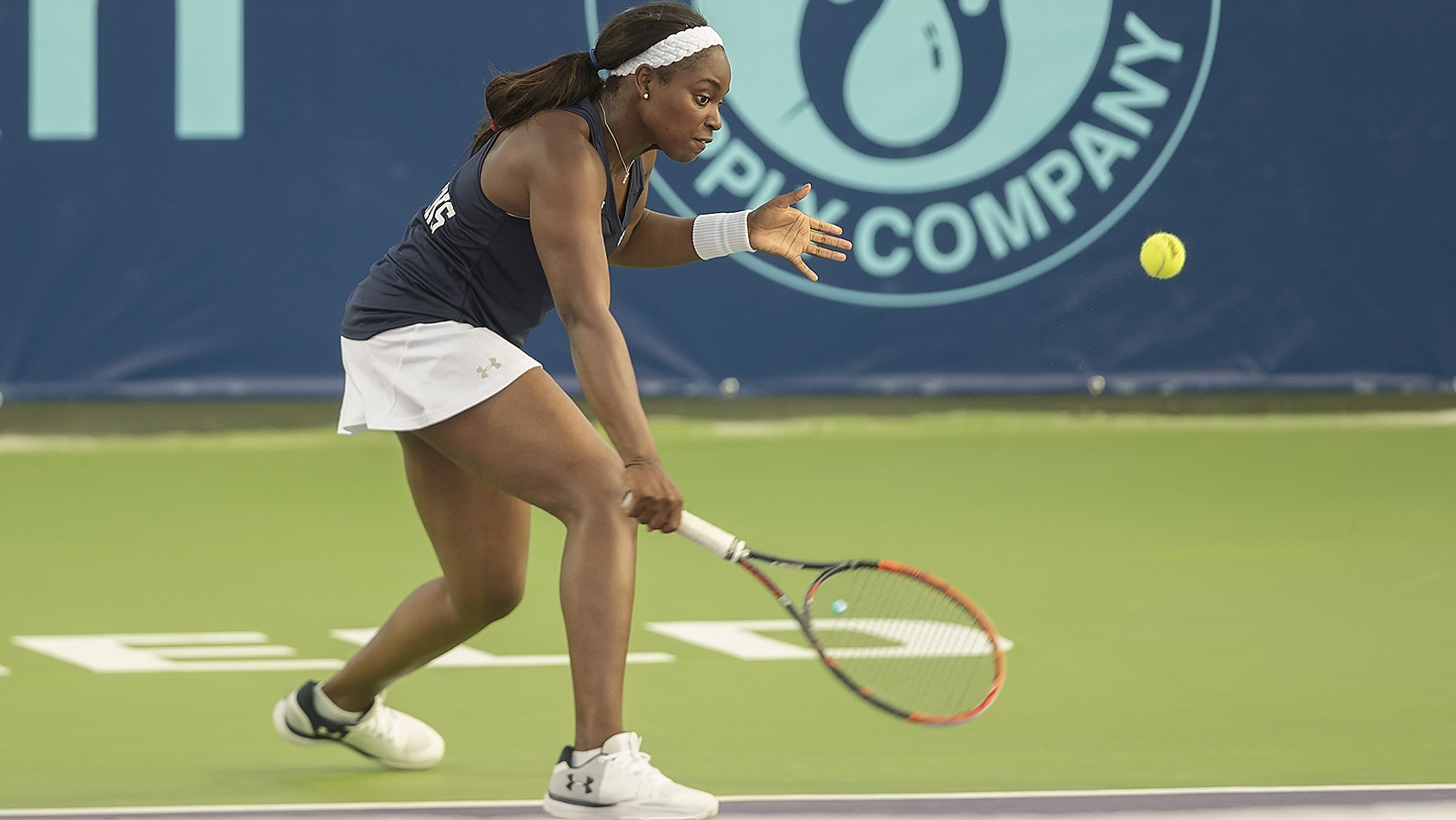 “You have to have played with a person before, I think, to have a little bit of chemistry with them,“ Stephens said. “Everything‘s going so fast, so you have to be able to talk to them. I can tell her she‘s behind, or she can tell me to get it together and there are no hard feelings.“

Those two have played together in the past, Stephens said, and done well. That experience has carried over. In a tight match, Stephens held serve and ÔÇô recovering from a 3-1 deficit ÔÇô broke Allie Kiick‘s serve to clinch a 5-3 win. That gave the Freedoms a 16-13 overall lead.

“If we could‘ve gotten to 4-4 and then won the tiebreaker, it could‘ve been a different match,“ Springfield coach John-Laffnie de Jager said.

Philadelphia clinched the win in mixed doubles, though Townsend and Fabrice Martin dropped four games in a row to allow Springfield to force extended play. But Martin, all 6-foot-6 of him, displayed catlike reflexes at the net to score crucial points.

“His reflexes at the net tonight were unbelievable,“ Freedoms coach Craig Kardon said. “The conditions are very fast and it‘s tough to see. The ball is really traveling through the air, so really tonight was just about getting a couple of lucky breaks.“

Kiick had a tough draw in her Lasers debut, challenging Stephens in women‘s singles. Stephens blanked Kiick, who is returning to the tour after being sidelined with an injury and a melanoma diagnosis in 2015, 5-0.

“She‘s only played in three tournaments,“ de Jager said. “To come into an environment like this is rough. Hopefully tomorrow night she‘ll be more relaxed. In situations like this you want so badly to play well, but you just have to relax and play.“

Springfield‘s Benjamin Becker had Darian King on the defensive for most of men‘s singles. He won the games he served by scores of 4-0, 4-1, 4-2 and 4-2.

“It‘s a fast court, so, if you serve well, it‘s easy to hold,“ Becker said. “(My serve) is one of the parts of my game that I actually like. When my serve is on I feel like I have a good chance of winning.“

Men‘s doubles, meanwhile, was a thriller, ending in a nine-point tiebreaker. That went down to a deciding point, served by King. But he sent a return shot wide of the sideline to give the Lasers the set.

The Freedoms got the match, however, before hopping on another plane for a new city. They play in Washington Friday night.

“Obviously it was nice to get my first win and it was a good team win,“ Stephens said. “It was a tough day of travel and we had to play back-to-back, but we won last night so it‘s a good trip for us so far.“

TURNING POINT: Springfield was on the verge of tying women‘s doubles at four games apiece and pulling within 15-14 in the overall score. The Lasers‘ Allie Kiick made a mad dash to the net to get to a drop shot, but lost her racket in the process. That left her defenseless against a Sloane Stephens backhand that gave Philadelphia the 5-3 set win and a three-point lead heading into the final event.

NEXT ON: The Lasers wrap up their two-night home stand with a 7 p.m. Central visit from the San Diego Aviators. It‘s marquee night in Springfield, as Jack Sock suits up for the Lasers and Ryan Harrison plays for the Aviators. Sock is the top-ranked American male singles player and was the only tennis player at the 2016 Rio Olympics to win two medals. Harrison is the reigning Mylan WTT Male MVP. The game will be streamed live on ESPN3.com. You can also follow results on WTT.com/livescores or SpringfieldLasers.com.