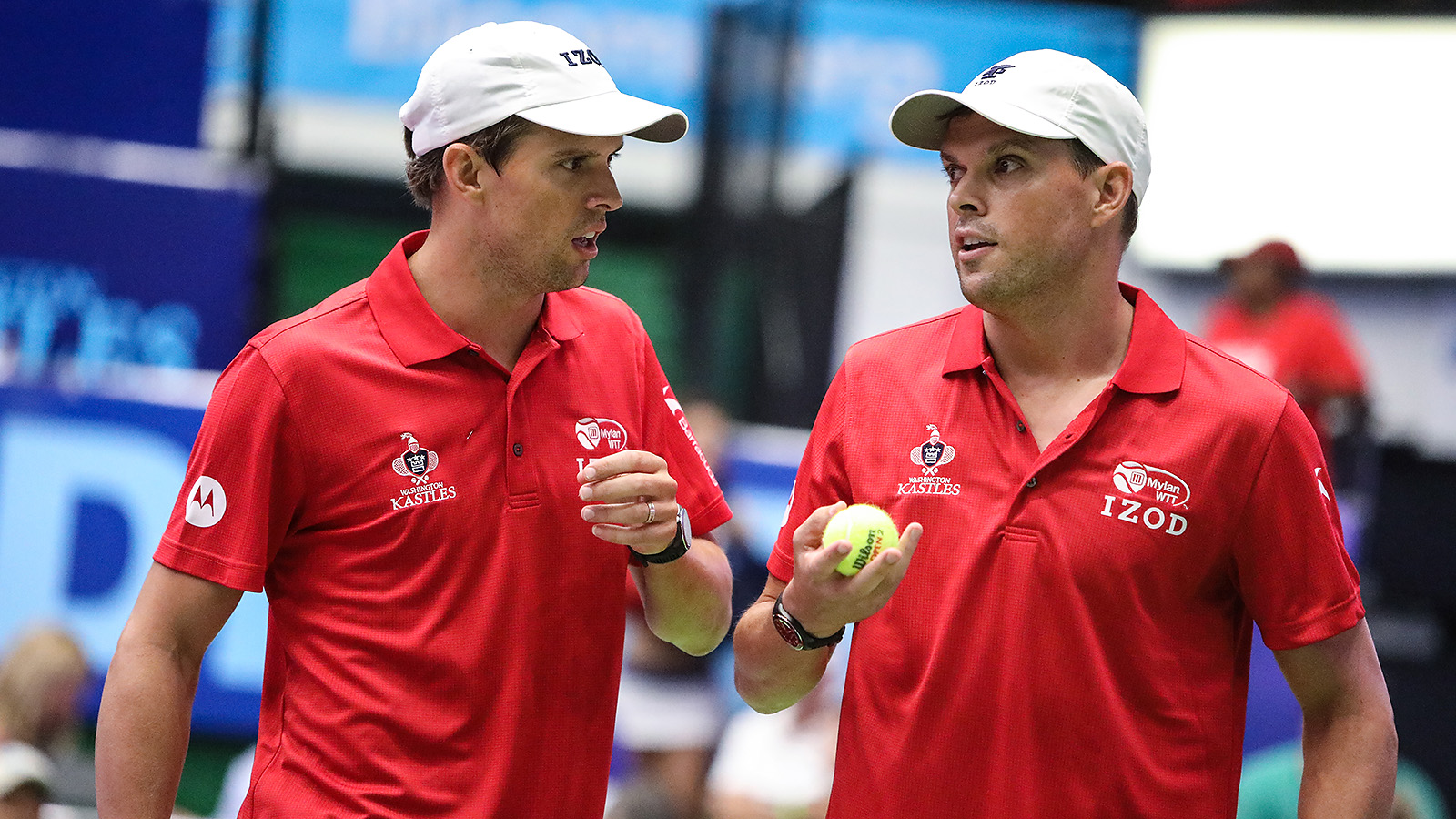 Bob and Mike Bryan‘s first appearance for the Washington Kastles this season spurred the D.C. squad to another excellent result at home. For the third night in a row, the Kastles claimed a victory at Kastles Stadium at the Smith Center, staving off a valiant effort by the San Diego Aviators and posting a 23-16 win. They improved their record to 3-1 (3-0 at home).

The Kastles had an inauspicious start to the match, as the first two sets went to the Aviators in tiebreaks. San Diego‘s Ryan Harrison eked out a 5-4 tiebreak over the Kastles‘ Frances Tiafoe with an ace on the final point, and the demonstrative Harrison celebrated to start off a night that would see him on the court for singles, doubles, and mixed doubles.

The tiebreak in the women‘s doubles was less competitive, as errors by Anastasia Rodionova and Madison Brengle proved costly. After the Aviators‘ Darija Jurak and Shelby Rogers eased to a 5-1 tiebreak triumph, the Kastles found themselves staring down a 10-8 lead by San Diego.

It was in the mixed doubles where the Kastles turned around the match. After a hotly-contested first couple of games, Rodionova fell behind on her serve, but a wily substitution of Mike Bryan for Bob turned that game around, and after the hold, the Kastles claimed the decisive break of Jurak‘s serve to lead 3-1. The Aviators‘ last-ditch effort to replace Raven Klaasen with Harrison for the final game was for naught, as Rodionova held serve easily to put the Kastles up 13-12.

Brengle kept the Kastles‘ momentum rolling in the women‘s singles set, with a comfortable 5-2 win over the Aviators‘ Rogers. It was Brengle who broke first at 3-1 in the all-American tussle, and although Rogers got back on serve in the next game, Brengle jumped to a 4-2 lead after hitting a crosscourt backhand winner on break point to reclaim the advantage. After Rogers dumped a second serve backhand return into the net, Brengle found herself with another dominant win in singles, putting the Kastles up 18-14.

Brengle credits the atmosphere for her recent blowout wins in women‘s singles. “I like the format, I think it‘s fun, the crowd is fantastic, so I really try to fight for every point.“ The Delaware native also believes that the “bounce and the speed“ of the Kastles home court suits her game. “I‘m very happy out here.“

It was left to the Bryan Brothers to close things out in men‘s doubles, and they did so in tremendous fashion, losing only three points in four service games en route to a 5-2 win over Harrison and Klaasen. A booming backhand return down the line clinched the break of Harrison‘s serve for a 2-0 lead, and the Californian twins held on easily from there, culminating in an ace by Mike on match point, followed by the omnipresent Bryan chest bump.

“When we‘re serving a high percentage and we‘re winning a lot of points on serve, everything else kind of falls into place,“ said Bob after the match. He credited Mike with a “great game“ to get the pivotal break of Harrison, who Bob thinks has “one of the best first and second serves on Tour.“

Meanwhile, Mike had nothing but praise for Coach Murphy Jensen, who gave Mike a mock CPR procedure after he was beaned by an errant ball during the match. “We love Murphy, he‘s an awesome captain, he brings the energy every night,“ said Mike. “He‘s kind of the lifeblood of this team. We idolized him growing up; we always wanted to be the Jensens, and we stole the chest bump from those guys.“

TURNING POINT: With Mike Bryan serving at 3-1 but down break point in the mixed doubles, Coach Murphy Jensen and the Kastles put a timeout to good use and found their focus. Mike saved the break point with a pristine volley, and then closed out the game to retain their lead and take the game, the set, and, eventually, the match.

NEXT ON: The Washington Kastles‘ four-night home stand ends tomorrow, when Sloane Stephens and the Philadelphia Freedoms come to Kastles Stadium for battle. Follow results on WTT.com/livescores or washingtonkastles.com. This broadcast will be streamed live on ESPN3.