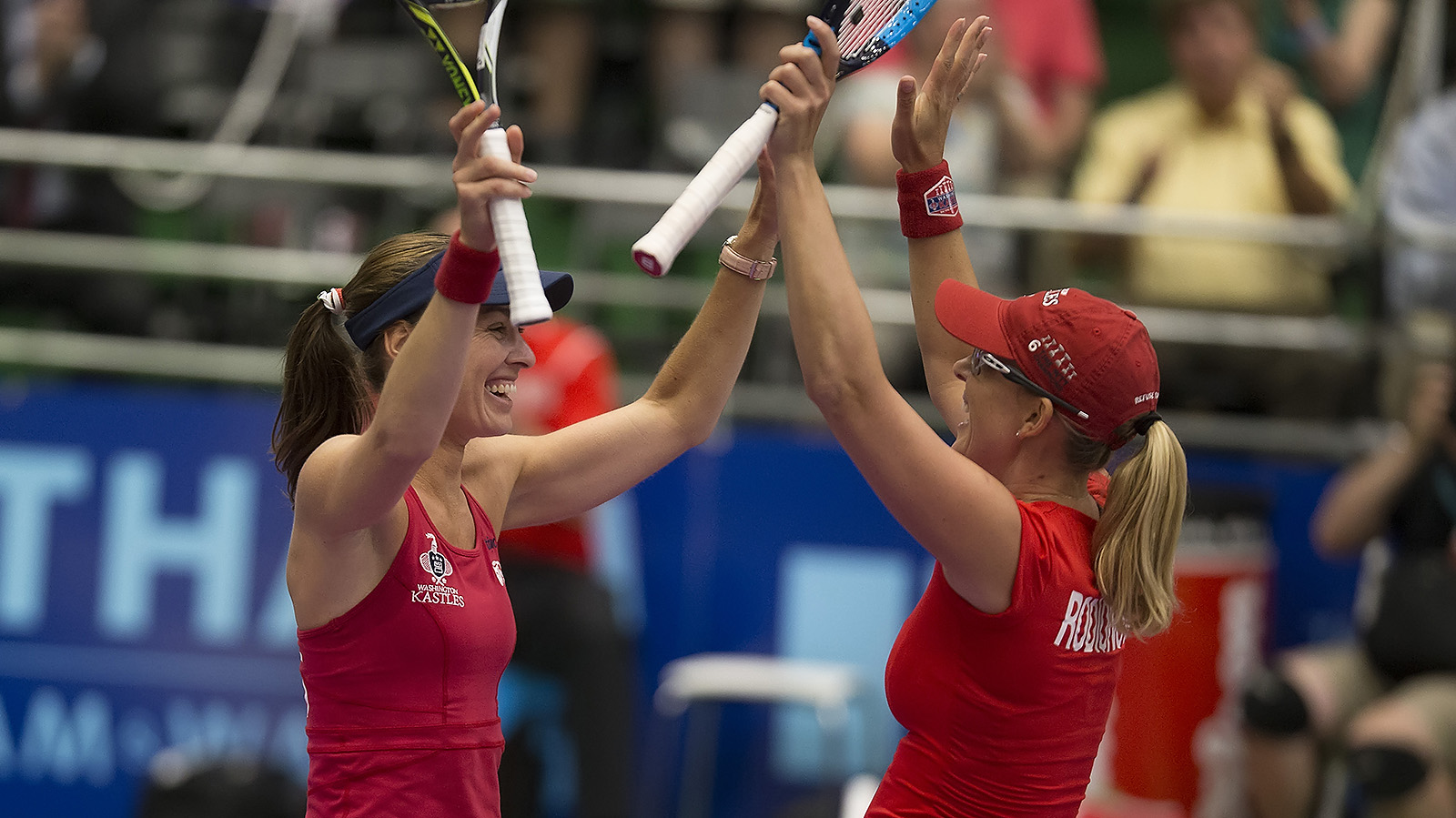 The ladies came through in force for the Kastles tonight, as blowouts in the women‘s singles and women‘s doubles led Washington to a dominant 22-15 victory over the Orange County Breakers, improving their record to 2-1 (2-0 at home).

The Kastles started off slow, as Martina Hingis and Treat Huey dropped the opening mixed doubles set to the Breakers‘ Andreja Klepac and Ken Skupski, 5-3. Klepac was particularly strong, returning serve for winners with ease, and for the second night in the row the Kastles found themselves behind at the start.

Hingis and Anastasia Rodionova turned the match around by overwhelming Klepac and Yanina Wickmayer in women‘s doubles. Leading 2-1, the Kastles survived multiple break points against Hingis‘s serve when coach Murphy Jensen fortuitously called a timeout, spurring Hingis and Rodionova on to three consecutive points and a hold.

After extending their lead thanks to a flurry of awe-inspiring volleys by Rodionova on break point at 3-1, the Kastles rolled to a 5-1 set, and an 8-6 lead in the match.

Hingis was thrilled by her partner‘s play to help her shake off the loss in the previous set. “After losing the mixed, I wanted to make up for it in [women‘s] doubles, and [Rodionova] was a great trouper to help me out,“ said the Swiss superstar. “By winning that set 5-1, I think that kind of got the team going, and we got in the groove.“

For the second consecutive match, neither men‘s doubles team made a dent on the other team‘s service. Only five points were lost on serve by both teams combined before the tiebreak. The closely-contested set was clinched by the Breakers 5-4 in the tiebreak, as Frances Tiafoe returned a Ken Skupski serve into the net, narrowing the Kastles‘ lead in the match to a single point.

But Madison Brengle continued her stellar summer form, and in the women‘s singles, the superior movement of the Delaware native successfully defused the high-risk power game of the Belgian Wickmayer. Brengle, fresh off a second-round upset of Petra Kvitova at Wimbledon, raced out to a double-break lead before closing out the set 5-1 and breaking the match wide open.

Leading 17-12, hometown favorite Frances Tiafoe claimed a quick final-set win in the men‘s singles to avoid extra time and send the Kastles to a straightforward victory. With Teymuraz Gabashvili serving at 3-4, Tiafoe was able to pull the game to the deciding point, and after an 8-shot rally, Gabashvili sent a groundstroke long, and the jubilant Kastles stayed undefeated at home in 2017.

The excitement of a second straight Kastles win was bolstered by their teamwork. Despite winning her women‘s doubles match with ease, Rodionova was quick to point out that her doubles team‘s recent home-court success was “not on the two of us, it‘s the whole atmosphere. We have great fans, great support, and the guys on the bench are really helping us.“

TURNING POINT: Madison Brengle came onto the court with Washington holding a slim 12-11 lead, but withstood a barrage of heavy groundstrokes by Yanina Wickmayer to win two deciding point games in a row for a 3-0, double-break lead. It was smooth sailing to the set and the match after that.

NEXT ON: Another Washington Kastles home match is set for the third night in a row, as Ryan Harrison and the San Diego Aviators come into town. Tomorrow‘s match features the Mylan WTT season debut for 16-time Grand Slam champions Bob and Mike Bryan. Follow results on WTT.com/scores or washingtonkastles.com. This broadcast will be streamed live on ESPN3.